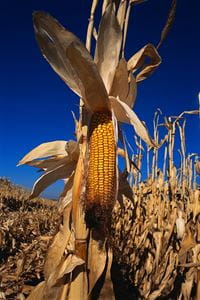 Mark Goebl, Ph.D., professor of biochemistry and microbiology at the Indiana University School of Medicine, and three of his former students hope to have found the secret to making a yeast product that more efficiently breaks down corn and other plants into the biofuel ethanol.

The former students, Josh Heyen, Ph.D., Ross Cockling, Ph.D., who earned their doctoral degrees from the IU School of Medicine, and Ball State University biostatistics student Cary Wood, along with investors Mike Neibler and Butch Mercer formed Xylogenics, Inc. in the fall of 2008. Heyen is the chief science officer for the company while Mercer is CEO  and chairman of the board.

The venture resulted from graduate work Heyen was doing in Goebl’s laboratory that was not related to ethanol production.  “Josh was looking at how yeast decide what they are going to eat,” explained Goebl.

Yeast feed on nitrogen, carbon and oxygen. The carbon takes the form of sugar, and glucose is their sugar of choice. Heyen was investigating what mutations eliminated yeast’s preference for glucose. Yeast interact with the sugar for energy and growth – the common fermentation system used to make wine and bread – and release ethanol and carbon dioxide as a waste product.

“Some of these mutations turned on genes that were thought to be important in breaking down cellulose in plants that normally can’t be broken down readily,” said Dr. Goebl.  Cellulose is the most common organic compound on earth. It accounts for about 33 percent of all plant matter and is a primary component of wood, cotton and many other non-food plants.

The reasoning, Dr. Goebl explained, was if yeast could survive and grow on cellulosic material, and be engineered to produce more byproduct, it could be more valuable as an energy source.

About a year after it was incorporated, Xylogenics formed a strategic relationship  with Lallemand, an international yeast manufacturer and leading supplier of fermentation ingredients for manufacturing, sales and distribution of yeast in U.S. and Canada.

Xylogenics’ initial goal is to make a strain of yeast useful for producing corn ethanol and use those profits to develop strains of yeast that work well with cellulosic based ethanol and other bio-based chemicals. Cellulosic plant material is plentiful, cost effective, and does not use a product that could feed people and animals.

The IU bioengineered yeast has passed regulatory hurdles and is in the testing phase at ethanol production plants in Indiana. The trick for mass producing the yeast has been accomplished; the test now is to see if what is created in the lab can be replicated in the field. The testing began in late spring and they hope to be selling the yeast to ethanol plants by early fall.

“We want the same advantages at the large scale production that we find in the lab, which include less enzyme byproduct, more ethanol and a shorter fermentation time,” said Dr. Goebl. “It’s all a matter of process, some things are more difficult to mimic on the large scale because of the way the production plant is constructed.”

The basic corn ethanol recipe is simple – corn starch that has been partially broken down into starch and some sugars, water, a little bit of enzyme and a little bit of yeast. What makes the IU ethanol production more efficient is the difference in the amount of sugar consumed and product produced.