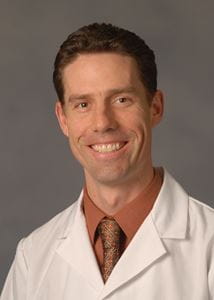 The histoplasma capsulatum fungus is most common in the southeastern, mid-Atlantic and Midwestern portions of the United States. The fungus grows in the soil and is more concentrated in soil contaminated with bird or bat droppings.

Like other areas of the body that can be infected with the fungus, the eye can remain asymptomatic for years.

The fungus can lodge in the layer of the eye behind the retina causing “histoplasmosis spots” or scars, said Ryan Prall, M.D., assistant professor of ophthalmology at the Eugene and Marilyn Glick Eye Institute.  These scars are usually not significant, he said.

“Ocular histoplasmosis is generally uncommon but here in Indiana a significant number of people have the spots caused by the scar tissue,” said Dr. Prall, a member of the Indiana University School of Medicine faculty.

“If the scars are on the macula, which is the center of the retina, they can cause new blood vessels to grow through and around those scars, which causes swelling and loss of vision,” he said. “This is known as choroidal neovascularization.”

With advancements in treatments fewer than 1 percent of patients with the condition lose significant vision, said Dr. Prall. Within the past decade, a drug that inhibits the growth of blood vessels, anti-VEGF, has been effective in treatment of histoplasmosis in the macula. If diagnosed and treated early, there typically is minimal vision loss, he said.

Although most people with ocular histoplasmosis were probably exposed as children, the condition usually doesn’t present as a problem until people are in their 40s and 50s, he said.

Indiana University School of Medicine faculty have long been interested in ocular histoplasmosis research, including one of the early pioneers in the field,

Theodore Schlaegel Jr., M.D., an IU Department of Ophthalmology professor and a graduate of the IU School of Medicine class of 1942.

Dr. Schlaegel collaborated with researchers from across the country and England in epidemiological studies and was one of the early scientists to believe the scars were the result of exposure to the histoplasmosis fungus.

He also is credited with establishing the link between histoplasmosis and a blinding retinal disease which causes inflammation and scarring in the retina, known today as ocular histoplasmosis syndrome.  He also was the founding president of the American Uveitis Society, which is focused on inflammatory diseases of the eye.