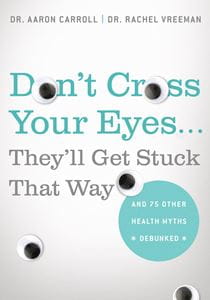 “You shouldn’t just accept that the toilet seat is the dirtiest place in the bathroom, or that the air on planes can make you sick, or that cell phones cause brain cancer.  It’s OK to question your physician. Asking why is just as important as asking what,” said Dr. Vreeman.

Why do so many myths exist?

“People want to make sense of the world around them; if they read it in the paper or on the internet, or hear it on TV or from their mom or others in authority, they think it must be true. The difference between association and causation is being lost. Just because two things occur at nearly the same time or initially appear related, like vaccines and autism, for example, doesn’t mean that one caused the other,” said Dr. Carroll.

The pair found that scientific scrutiny shows, for example, that vitamin C does not cure colds or even mitigate cold symptoms; hydrogen peroxide is not good for wounds and may actually be bad; and air dryers do not keep your hands cleaner than paper towels.

The authors admit that even they believed some myths prior to investigating the science, or lack of science, behind them. Dr. Carroll was convinced that avoiding eggs, known to be high in cholesterol, was good for the heart, but research shows that eggs do not lead to heart disease in otherwise healthy people. Dr. Vreeman was certain that stretching before running would help her be a better runner.  It won’t, according to studies. They both thought that uncovering a wound at night would help it heal, but studies show that is not true either.

One myth you don’t have to surrender? While it hasn’t been studied in rigorous clinical trials of healthy and sick individuals, chicken soup does have properties that make you feel better when you have a cold.

Don’t Cross Your Eyes…They’ll Get Stuck that Way! is published by St. Martin’s Press and is available online and at book stores across the country.

Dr. Carroll and Dr. Vreeman, who are Regenstrief Institute affiliated scientists and Riley Hospital for Children at Indiana University Health physicians, are also the authors of Don’t Swallow Your Gum!:  Myths, Half-Truths, and Outright Lies About Your Body and Health, published in 2009. In this book they debunked such myths as eating turkey makes you sleepy and a dog’s mouth is cleaner than a human’s.