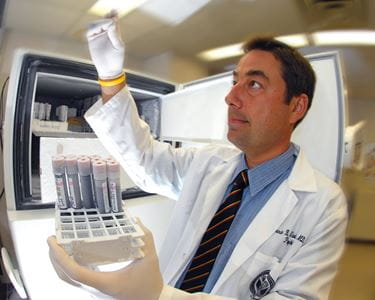 In a multi-year study, researchers showed conclusive behavioral and molecular benefits for omega 3 fatty acid given to mice models of bipolar disorder. The fatty acid DHA, which is one of the main active ingredients in fish oil, “normalized their behavior,” according to Alexander B. Niculescu, M.D., Ph.D., associate professor of psychiatry and the lead author of the study reported online in the Nature Publishing Group journal Translational Psychiatry.

Using a stress-sensitive mouse model of bipolar disorder developed in his lab, Dr. Niculescu and his colleagues studied the influence of dietary DHA. The mice have characteristic bipolar symptoms including being depressed and, when subjected to stress, becoming manic.

“The mice that were given DHA normalized their behavior, they are not depressed and when subjected to stress, they do not become manic,” said Dr. Niculescu. “When we looked into their brains, using comprehensive gene expression studies, we were surprised to see that genes that are known targets of psychiatric medications were modulated and normalized by DHA.”

An unexpected finding of the research was the discovery that the mice given DHA also showed a reduced desire for alcohol.

“These bipolar mice, like some bipolar patients, love alcohol. The mice on DHA drank much less; it curtailed their alcohol abusive behavior,” he said, adding that this is a completely novel finding. To verify this finding, the researchers studied another well-established animal model of alcoholism, the alcohol preferring P rats, and obtained similar results.

“We believe a diet rich in omega 3 fatty acids may help the treatment and prevention of bipolar disorder, and may help with alcoholism as well,” he said.

The researchers also found correlations between mouse brain molecular changes and molecular markers in their blood, so called “biomarkers.”

“There is now substantial evidence at the molecular level that omega-3 fatty acids work on the brain in ways similar to psychiatric drugs,” said Dr. Niculescu. “With these biomarker findings, we can now move forward as a field and do more targeted clinical studies in humans.”

Omega 3 fatty acids are known to be good for one’s health, good for one’s brain, and lack major side-effects, as opposed to some psychiatric medications, he said. Perhaps, he said, omega 3 fatty acid could in the future be used as an adjuvant treatment to minimize the amount of psychiatric drugs needed to produce the same effect, especially in pregnant women or women who intend to get pregnant.

“A lot more work needs to be done in this area,” Dr. Niculescu said.

The research was supported by a National Institutes of Health Director’s New Innovator Award grant to Dr. Niculescu.