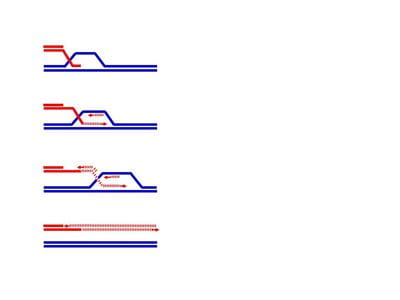 Accurate transmission of genetic information requires the precise replication of DNA. Errors in DNA replication are common and nature has developed several cellular mechanisms for repairing these mistakes. Mutations, which can be deleterious (development of cancerous cells), or beneficial (evolutionary adaption), arise from uncorrected errors. When one or many cells repair themselves using the efficient BIR method, accuracy is lost.

“When BIR occurs, instead of using a “band aid” to repair a chromosomal break, the broken piece invades another chromosome and initiates replication which happens at the wrong place and at the wrong time and probably with participation of wrong proteins,” said Anna Malkova, Ph.D., associate professor of biology at the School of Science at IUPUI, who led the study.

The researchers used yeast to investigate the level of mutagenesis associated with BIR and found that the method’s proclivity to cause mutation was not affected by where on the DNA the repair was made.

Why is BIR so inaccurate as compared to normal replication?

“We didn’t find a smoking gun,” said Malkova, also an adjunct associate professor of medical and molecular genetics at the Indiana University School of Medicine. “We think there are at least four changes to replication machinery that must occur to create a perfect storm or synergy which make BIR repair so mutagenic.”

For example, during BIR, the researchers found a dramatic increase in concentration of nucleotides — the building blocks used to form DNA.

“Our findings strongly suggest that mutagenesis caused by BIR doesn’t happen slowly, it occurs in surges – sudden bursts which may lead to cancer,” said Malkova, who is a geneticist. “We plan to continue investigating BIR in the hope of finding clues as to why this mechanism of cell repair is so likely to cause mutations. The ultimate goal, of course, is to prevent those mutations that cause cancer.”

Co-authors of the study, “Break-induced Replication Is Highly Inaccurate” are Angela Deem, Tiffany Blackgrove, Alexandra Vayl, Barbara Coffey, and Ruchi Mathur of the School of Science at IUPUI and Andrea Keszthelyi and Andrei Chabes of Umea° University. The work was supported by the National Institutes of Health (U.S), the Swedish Foundation for Strategic Research; the Swedish Research Council, and the Swedish Cancer Society.

The School of Science at IUPUI is committed to excellence in teaching, research and service in the biological, physical, behavioral and mathematical sciences. The School is dedicated to being a leading resource for interdisciplinary research and science education in support of Indiana’s effort to expand and diversify its economy. For more information, visit www.science.iupui.edu