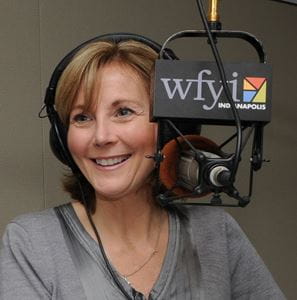 Sound Medicine reporter Colleen Iudice will visit the Robotic Rehab Center at Riley Hospital for Children to report on how robots are helping children with cerebral palsy and similar diseases. She will talk to Hermano Igo Krebs, MD, a principal research scientist at Massachusetts Institute of Technology, who has been studying robotic rehabilitation for nearly 20 years.  In his work, he’s found that stoke patients who used robotic therapy saw 10 to  20 percent improvement in movement.  Today he’s looking at how robotic therapy machines can help children like the patients at Riley Hospital.

Joan Luby, MD, a professor of child psychiatry at Washington University School of Medicine, has been doing research in the field of depression among preschoolers for 20 years.  Early on, her work was met with great skepticism. Today her viewpoint is shared by others who have documented depression in the very young.

It’s well known that chemotherapy can cause mental cloudiness–a condition known as “chemobrain.” Now, for the first time, researchers have used brain imaging to document how chemotherapy affects brain tissue.

Co-host Steve Bogdewic, PhD, will talk with Andrew Saykin, PsyD, director of the Indiana University Center for Neuroimaging and a researcher at the IU Simon Cancer Center, and Brenna McDonald, PsyD, MBA, assistant professor in radiology and imaging science at the IU School of Medicine. The two researchers and their colleagues found that gray matter changes were most prominent in the areas of the brain that are consistent with cognitive dysfunction during and shortly after chemotherapy.

Actress and writer Marianne Leone wrote a memoir, Knowing Jesse, about her late son, Jesse Cooper who, after having a cerebral hemorrhage soon after birth, developed severe cerebral palsy, was non-verbal and suffered from frequent seizures. She discusses her fight to give her son a meaningful, full life.

For archived editions and other helpful information check the Sound Medicine website.