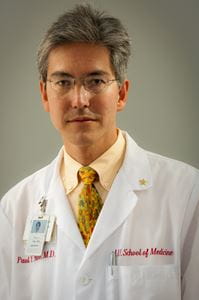 The research team, led by Paul Kwo, M.D., of Indiana University School of Medicine, reported that adding the drug nearly doubled the treatment’s effectiveness when given for 48 weeks in one treatment arm of the study.

An estimated 3.2 million Americans and 170 million people worldwide are infected with the hepatitis C virus, but many do not know it. In the United States, 70 percent of affected individuals are infected with genotype 1 hepatitis C, the most difficult to treat. Although there may be no symptoms for years, long-term infection can cause cirrhosis and the disease is a leading cause of liver cancer and liver transplantation. Hepatitis C infections occur mainly through transmission of infected blood, such as via injection drug use, and there is no vaccine.

Currently fewer than half of patients with genotype 1 hepatitis C are treated effectively by the standard combination of two drugs, peginterferon alfa-2b plus ribavirin, which is typically given for 48 weeks. The treatment can be difficult for some patients due to anemia and other side effects.

Adding the drug boceprevir increased the cure rate to as high as 75 percent in those who received 48 weeks of the three-drug combination therapy, compared to 38 percent of those in the control group, who received the standard two-drug treatment for 48 weeks, said Dr. Kwo, associate professor of medicine at the IU School of Medicine. The two-year phase 2 trial was conducted at 67 sites with 520 patients in the U.S., Canada and Europe.

In the boceprevir study, known as the SPRINT-1 trial, researchers tested several different options to evaluate the effectiveness of the combination therapy:

“Both 28- and 48-week boceprevir regimens significantly increased sustained virologic response  rates – which is the best definition of a cure we have – compared to the 48 week control,” said Dr. Kwo. “The 48-week treatment arm with 4 weeks of peg interferon lead-in and 44 weeks of peg interferon, ribavirin, and boceprevir led to the largest improvement over the control group ever reported. That’s very impressive.”

Boceprevir, a product of Merck & Co., is an HCV protease inhibitor – a compound designed to block a function key to viral reproduction in the cell. Boceprevir directly targets the hepatitis C virus, Kwo noted, while peginterferon and ribavirin are less specific, acting more generally to stimulate the body’s virus-fighting immune system.

The best results were reported for the 103 patients who were treated for four weeks with the standard two drug regiment, followed by 44 weeks of the three-drug regimen including boceprevir: 75 percent of these patients tested negative for evidence of the virus six months after the end of treatment. Results for the other treatment arms were:

Patients receiving the low-dose of ribavirin did not fare as well – just 36 percent were virus-free after 48 weeks of treatment.

“Based on this phase 2 study, it appears that if this drug receives final approval approximately two-thirds of patients will be able to be treated successfully with 28 weeks of treatment and one-third will need 48 weeks of treatment, though this will require confirmation from the phase 3 trials, from which preliminary results were recently released,” said Dr. Kwo.

The research was funded by Schering Corp. a division of Merck & Co., which provided assistance with the trial, data collection and analysis, and the manuscript.