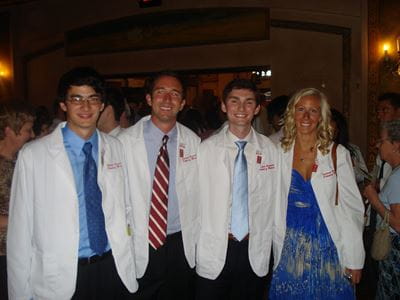 The four students are Eric David Doerr, Kate Elizabeth Goeller, Nicholas Chuck Lynch and Peter Joseph Massa. They are joined at the IU School of Medicine by 2006 Terre Haute North High School graduate Emily Elaine Tenbrink. A sixth Terre Haute resident, Patrick Titzer, a native of Evansville, also is in the first-year class at the IU School of Medicine.

On a recent Sunday, all six joined the class of 322 men and women in a ceremony laced with tradition prior to the start of medical school. As family and friends watched, members of the class of 2014 crossed the stage at the Murat Theatre and were assisted by a medical school faculty member into a doctor’s coat – symbolic of clinical service. During the White Coat Ceremony the future doctors also repeat a physician’s pledge whose origins are attributed to the Greek physician Hippocrates. The students also sign the IU School of Medicine Honor Code.

By establishing this meaningful ritual at the beginning of four years of classes, the school conveys the responsibilities of a medical career from the first day of training. The ceremony is intended to impress upon students the primacy of the doctor-patient relationship. The ceremony encourages students to accept the obligations inherent in the practice of medicine:  to be excellent in science, to be compassionate, and to maintain the honor and dignity of the profession.

The “Tour the Life” blogs for seven other IU medical students can be accessed at https://medicine.iu.edu/blogs.