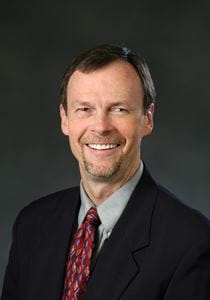 A graduate of Indiana University and the IU School of Medicine and one of Regenstrief’s first post-graduate trainees, Dr. Tierney has spent his entire 30-year career as a physician-investigator with Regenstrief and the IU School of Medicine, where he is a Chancellor’s Professor and the Joseph J. Mamlin Professor of Medicine. Dr. Tierney studies the effects of innovative, computer-based interventions to improve health care quality and lower costs of health care delivery. He has been the principal investigator on more than $22 million in grants from federal agencies and foundations. He has published more than 260 articles in leading medical journals including the New England Journal of Medicine, Journal of the American Medical Association and the Annals of Internal Medicine. He has mentored 20 fellows and faculty members.

“I am excited by the challenges we face and the prospects they present,” said Dr. Tierney. “Building upon the 35 years of data of the Regenstrief Medical Record System and decades of groundbreaking health services and aging research, the Institute has an enormous opportunity to lead a revolution in healthcare systems and delivery of health care both in the United States and globally.”

Dr. Tierney is chief of medicine at Wishard Health Services where he practices as a hospital-based general internist. He is a member of the Institute of Medicine of the National Academies, a master of the American College of Physicians, a fellow of the American College of Medical Informatics and a former president of the Society of General Internal Medicine. He has served as co-editor-in-chief of two leading medical journals: Medical Care from 1997-2002 and the Journal of General Internal Medicine from 2005-2009.

“Bill Tierney is an outstanding leader in the medical school and Regenstrief Institute,” said D. Craig Brater, M.D., dean of the IU School of Medicine. “His unique talents assure that Regenstrief and the school will continue to play a critical role in shaping the next generation of health care delivery systems.”

Dr. Tierney is stepping down from his current position as director of research for the IU-AMPATH Program in East Africa where, since 2002, he and IU colleagues have led a consortium of more than 15 North American universities performing research with Moi University in western Kenya.

In Kenya, Dr. Tierney also led a Kenyan and American team that implemented the first and most successful outpatient electronic medical record system in sub-Saharan Africa. Today that system holds records from more than 2.5 million patient visits for more than 230,000 Kenyan patients, including more than 110,000 with HIV/AIDS. This system has been expanded by developers at Regenstrief and Partners in Health to become OpenMRS, built upon the knowledge acquired in the development of the Regenstrief Medical Record System, and is now the most widely implemented open-source electronic medical record system in the developing world. In appreciation of his work to improve health in Kenya, Dr. Tierney was named an elder of the Nandi tribe of Mosoriot, Kenya in 2002.

Dr. Tierney will assume his new positions in October when he takes the reins from Thomas S. Inui, M.D., who remains with the institute where he will focus on global health research.

“As we began to look for a successor to Dr. Inui and talked to people both locally and nationally, it became quite clear that our own Dr. Tierney was the person who had the best mixture of skills that the position requires. I am delighted that Dr. Tierney has accepted the position,” said Leonard J. Betley, J.D., chairman of the board of directors of the Regenstrief Institute.

The Regenstrief Institute is a distinguished medical research organization dedicated to improving the quality of health care and is the World Health Organization’s first and only Collaborating Center for Medical Informatics. Regenstrief is the home of internationally recognized centers of excellence in medical and public health informatics, aging, and health services and health systems research. Institute investigators are faculty members of the IU School of Medicine, other schools at Indiana University-Purdue University Indianapolis, or Purdue University.