Ophthalmologist Says Leave Fireworks to the Professionals this Fourth of July 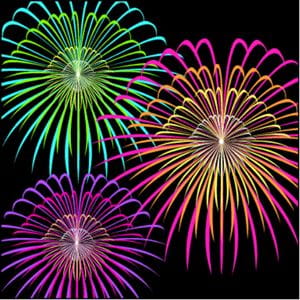 Sparklers, a mainstay of many Fourth of July celebrations, can reach that temperature. Along with other consumer fireworks, sparklers caused more than half of the fireworks injuries reported in Indiana in 2009, according to the Indiana State Department of Health.

“Never give your child a firework as a plaything,” advised Daniel Neely, M.D., a pediatric ophthalmologist at the Indiana University School of Medicine Department of Ophthalmology and Riley Hospital for Children.

“Fireworks exhibits are best left to professionals. Adults, and particularly children, should not play with these devices that can cause eye injuries, burns and bruises,” Neely said.  “It’s important to remember that fireworks are not safe, and improper use can result in serious injury. While the pyrotechnic display can be spectacular, the potential for injury and perhaps vision loss presents a significant risk.”

Nationally, the Consumer Product Safety Commission reported that nearly 5,000 fireworks-related injuries were treated in hospital emergency departments between June 20, 2008 and July 20, 2008, the most recent year for which statistics are available. For children under 5 years old, sparklers accounted for the largest number of estimated injuries at 200, which was almost one-third of the total injuries for that age group. Children 5 to 14 years old also had an estimated 200 injuries from sparklers, the CPSC report said.

“Don’t let a fun-filled day turn into a tragic event because of children – or adults – playing with fireworks,” Dr. Neely cautioned. “Children, especially those under age 5, don’t have the physical coordination to handle fireworks and may become frightened. Other children may suffer injuries because of curiosity about how the device burns or is ignited.”

Injuries can occur when the fireworks are improperly used, explode earlier or later than expected, take an errant flight path or throw sparks or debris, the ISDH report said.