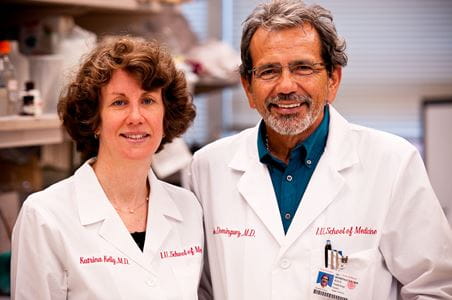 Indiana University School of Medicine researchers have successfully treated acute kidney injury in laboratory experiments using cells that were genetically reprogrammed to produce the protein. The research suggests there could be a potential future treatment using such cells delivered intravenously instead of surgically.

Hospital health care professionals must deal with such renal problems – during which the kidneys cannot adequately perform their critical roles of removing bodily waste – in about five percent of all patients, and a much higher percentage of patients in intensive care units.

IU scientists Jesus Dominguez, M.D., and Katherine Kelly, M.D., report in the August issue of the American Journal of Physiology – Renal Physiology, available online, that they were able to treat acute kidney failure in animal models using cells modified to produce a protein that normally is found when kidneys first develop in embryos. That protein, called SAA, also is produced by the liver in periods of bodily stress, such as during infections, fever or surgery.

In earlier research they had found that applying the SAA protein directly to kidney cells caused those cells to produce tubules like those found in normal kidneys to remove waste products from the blood. Tests determined that the tubules were functional.

The next step was to test whether the protein could have a similar impact in living animals. However, the protein is not easily available, so the researchers modified kidney cells to produce the protein. When the cells were infused into rats with renal failure, their kidney function improved quickly and significantly, the researchers found.

“In other studies, protecting the kidney usually doesn’t work after the injury has begun,” said Dr. Kelly, assistant professor of medicine. “But this is a significant degree of protection of the kidney, especially for something given after the fact.”

In addition, using images from the Indiana Center for Biological Microscopy, the researchers discovered that the infused cells integrated themselves into the kidneys, which showed much less physical damage than the untreated kidneys.

“Now we know that cells can be modified and made to integrate into the kidney from a long distance. So we can give the cells from a peripheral vein and they will go to the kidney and build up, from the inside out. So our model seems to be developing into a transplant model,” said Dr. Dominguez, professor of medicine and a physician at the Roudebush VA Medical Center.

The research was support by grants from the U.S. Department of Veterans Affairs and the Clarian Health Values Fund.