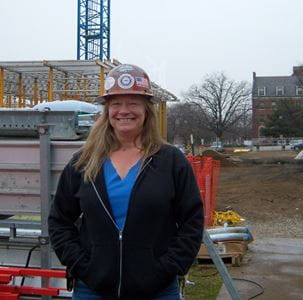 An experienced tower crane operator, Seybold also sat in the driver’s seat of tower cranes used for construction at Walther Hall (R-3) and the Indiana University Melvin and Bren Simon Cancer Center on the Indiana University- Purdue University Indianapolis campus, and the new JW Marriott Hotel in downtown Indianapolis. Her first stint as a crane operator was setting panes of glass at the pagoda at the Indianapolis Motor Speedway – a job that had been her husband’s. She took over after he suffered a heart attack and later was told she had a knack for the job.

“The first time I went up, I was scared to death,” Seybold said. “I couldn’t look down. I thought I’d either have to learn to run it or climb down. But it’s like anything else, it took a while to get used to, it takes practice.”

Now, there’s no place else the 48-year-old Wanamaker resident would rather be on a job site.

“It’s like home up there,” Seybold says of her 3 ½ by 5-foot “office” high atop the blue tower. “I have a hot plate so I can heat food, and I have electric heaters and I keep a blanket up there. I have extra sweatshirts in case the temperature drops.”

She enjoys her male colleagues and says they’ve overcome any inhibitions about having a woman crane operator. The first time they heard a female voice over the radio they might have been taken aback, but, “now they are used to me. Plus we’ve worked on other jobs. They’re a good bunch of guys. And being a novelty or an oddity can always make someone’s jaw drop.”

Scott Marvel, Wilhelm’s supervisor at the Glick construction site, says Seybold is a great colleague and a great worker. “She was taught well,” he said.

Seybold’s biggest fans include her father and her grandson. Her mother, she says, begs her not to reveal the height of her tower – it was 450-feet on the Marriott job. “But my dad, he’s so proud. And I can tell my grandson, as he grows up, that I helped build those buildings,” Seybold said.

Seybold said the view from the tower can depend on the day, but she usually can see most of downtown and the new air traffic control tower at Indianapolis International Airport. And she can view people who look up to her. “There are some girls who come out of the dental school and wave. And people stop and look up,” she said.

The best part of her job is hitting her mark and “dropping the hook right in the hands” of her colleagues as she moves all manner of materials – including concrete, lumber and generators – around the job site.

As for the question everyone asks – Seybold said she makes only one trip up and one trip down every day. She likens her daily journey to that of eco-sensitive mountain climbers or campers who carry in their food and carry out their waste.

“That’s the question I get asked more than anything – and it was my first question when I started,” she said.

Seybold looks forward to completing the Glick Eye Institute – she’ll be in the crane as long as it’s operating on the site. Construction is expected to be complete next summer.

“When the IU Simon Cancer Center was done, I went over there and had lunch and walked around. I love construction – I like the thought of starting with nothing and getting to see it all go up,” she said.