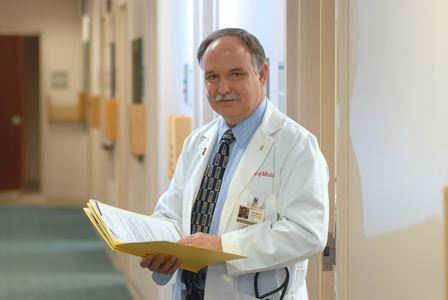 Dr. Loehrer also will serve as associate dean for cancer research and hold the title HH Gregg Professor of Oncology, pending approval by the board of trustees, at the Indiana University School of Medicine.

Craig Brater, M.D., dean of the IU School of Medicine, made the announcement Monday.

“I am very pleased to be able to name Pat Loehrer as the second director of the IU Simon Cancer Center,” said Dr. Brater. “Pat is a great role model for our students and a compassionate caregiver to his patients. He has shown exceptional leadership qualities, progressive ideas and has been a dedicated member of the faculty for the past 20 years.”

Dr. Loehrer is the second person to lead the cancer center since its founding in 1992. He had been serving as interim director since February 2009 following the death of Stephen D. Williams, M.D., the founding director.

Dr. Loehrer, who joined the IU faculty in 1990, is an internationally recognized researcher and specialist in testicular cancer, gastrointestinal cancer and thymoma, and he is consistently named in “America’s Top Doctors for Cancer.”

For two decades, he served as the founding chair of the Hoosier Oncology Group, a statewide collaboration of academic and community oncologists that united for the purpose of conducting clinical trials in the community setting.

He is principal investigator at Indiana University for the Eastern Cooperative Oncology Group, one of the first and largest cooperative groups of researchers and health professionals focused on conducting multi-center cancer clinical trials. Dr. Loehrer has served on the board of directors of the American Board of Internal Medicine and was chair of the Medical Oncology Subcommittee. He was recently appointed to the Oncology Drug Advisory Committee of the Food and Drug Administration.

As director of the cancer center, he leads more than 220 investigators who work to find better ways to prevent, detect and treat cancer. IU’s cancer research is known around the world, including improving the cure rate of testicular cancer from 10 percent to nearly 95 percent. IU researchers have gained an international recognition for treatment of breast, gastrointestinal, genitourinary, hematologic, and thoracic cancers as well as bone marrow and stem cell transplantations.

Dr. Loehrer earned his medical degree from Rush Medical College in Chicago in 1978. He completed an internship and residency in internal medicine at Rush-Presbyterian St. Luke’s Medical Center prior to completing his medical oncology fellowship at Indiana University.

Dr. Loehrer and his wife, Deborah, reside in Indianapolis. They have three adult children.

The IU Simon Cancer Center is a partnership between the IU School of Medicine and Clarian Health and is located on the Indiana University-Purdue University Indianapolis campus.