The Road Always Led Back Here 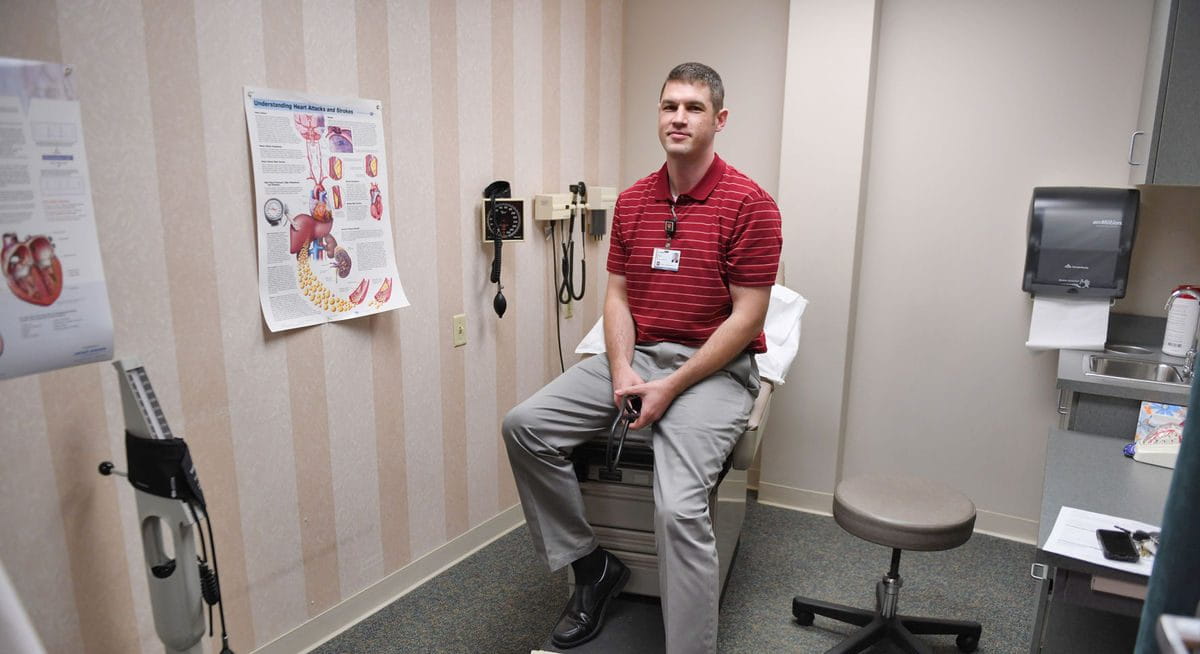 STROLLING ACROSS the Indiana University campus, Kyle Hornsby attracted his fair share of double-takes during his first year of medical school. At 6-foot-5, Hornsby was hard to miss. And at a basketball-obsessed school, the attention made sense. Three years earlier, Hornsby’s shooting stroke propelled the Hoosiers to the finals of the NCAA tournament. On a roster lacking traditional star power, Hornsby, who shot 47.3 percent from the 3-point that March, was emblematic of IU’s first Final Four team in a decade.

“Now I’m just a tall doctor,” said Hornsby, a 2009 graduate of Indiana University School of Medicine who today works as a cardiologist in Bloomington.

When he first entered IU Bloomington as an undergraduate, Hornsby’s outlook on his hardwood career was realistic. He knew the chances of a professional career – even in Europe – were slim. His plan was to earn his degree in kinesiology and enter a physical therapy program when his college days were done.

Instead, the guard pivoted and set his sights on medicine. A decade later, the path he chose still remains surprising.

“No one in my family is a physician,” he said. “It wasn’t established in kindergarten that I was going to do this. It was just a step-wise progression. If I had said I wanted to do this as a freshman in college, I would have no clue what that meant.”

To prepare himself for medical school, Hornsby spent two years after earning his bachelor’s degree checking off prerequisites and studying for the MCAT. He was admitted to IU School of Medicine and donned his short white coat in August 2005. The School of Medicine has nine campuses across Indiana, and Hornsby spent his first two years in a familiar place – Bloomington – before moving to Indianapolis to complete his clinical rotations.

He credits four years of college basketball with instilling in him time management skills and study habits that helped him thrive in his new role as medical student.
No one in my family is a physician. It wasn’t established in kindergarten that I was going to do this. It was just a step-wise progression. If I had said I wanted to do this as a freshman in college, I would have no clue what that meant.

As a player, Hornsby sat through film sessions, digested scouting reports, sweated through several hours of practice and traveled for games – a time crunch that often surpassed 20 hours per week. “I was more prepared than most,” he said of medical school’s rigors. “You learn to prioritize when playing a college sport. What are the things worthy of your attention? What are the things you can do without? The profession is still busy and still tough at times, but it’s nothing I haven’t done before.”

Hornsby was drawn to cardiology while doing a required reading on the field between his first and second years. At the same time, John Strobel, MD, a Bloomington cardiologist, alumnus and volunteer faculty member for the School of Medicine, invited him into the electrocardiogram room to observe how he analyzes the electrical impulses of the heart.

To Hornsby, the EKG’s readings and data were puzzle pieces for him to assemble and interpret. Even now, he admits to losing track of time when conducting exams or studying the results.

“I was hooked,” Hornsby said. “He didn’t have to let me in the room, and I’m grateful to him for giving me those experiences when I was still a medical student trying to figure things out.”

The mentorship of faculty and physicians like Strobel not only made medical school meaningful, but it helped position Hornsby for his successful residency in internal medicine at Duke University and a fellowship in clinical cardiac electrophysiology at the University of Michigan.

Along the way, he had another mentor in Larry Rink, MD, a Bloomington cardiologist who has served as the Hoosiers’ team physician for nearly 40 years and ultimately sold Hornsby on a return to Indiana. “As soon as I started talking about doing cardiology during my first year of med school, he was already working on his recruitment to get me back here,” Hornsby said.

The pitch worked. Hornsby joined Premier Healthcare in 2015, now Indiana University Health, Southern Indiana Physicians. When Hornsby shows up to work these days, Dr. Strobel is his colleague, and he has a view into Dr. Rink’s office. Hornsby has also kept ties to the Hoosier basketball program through Dr. Rink, and he’s worked alongside his mentor doing heart evaluations at the World University Games.

“It’s a great community,” Hornsby said. “And the road has always led back here.”

To learn more about getting involved with the Indiana University School of Medicine Alumni Association, contact Ryan Bowman at rsbowman@iu.edu or 317.278.2123.