Rafat Abonour’s commitment to curing multiple myeloma is unwavering. Each year, he leads a ride for a cure—a ritual that binds him closer to the patients he has lost and those he is trying to save. 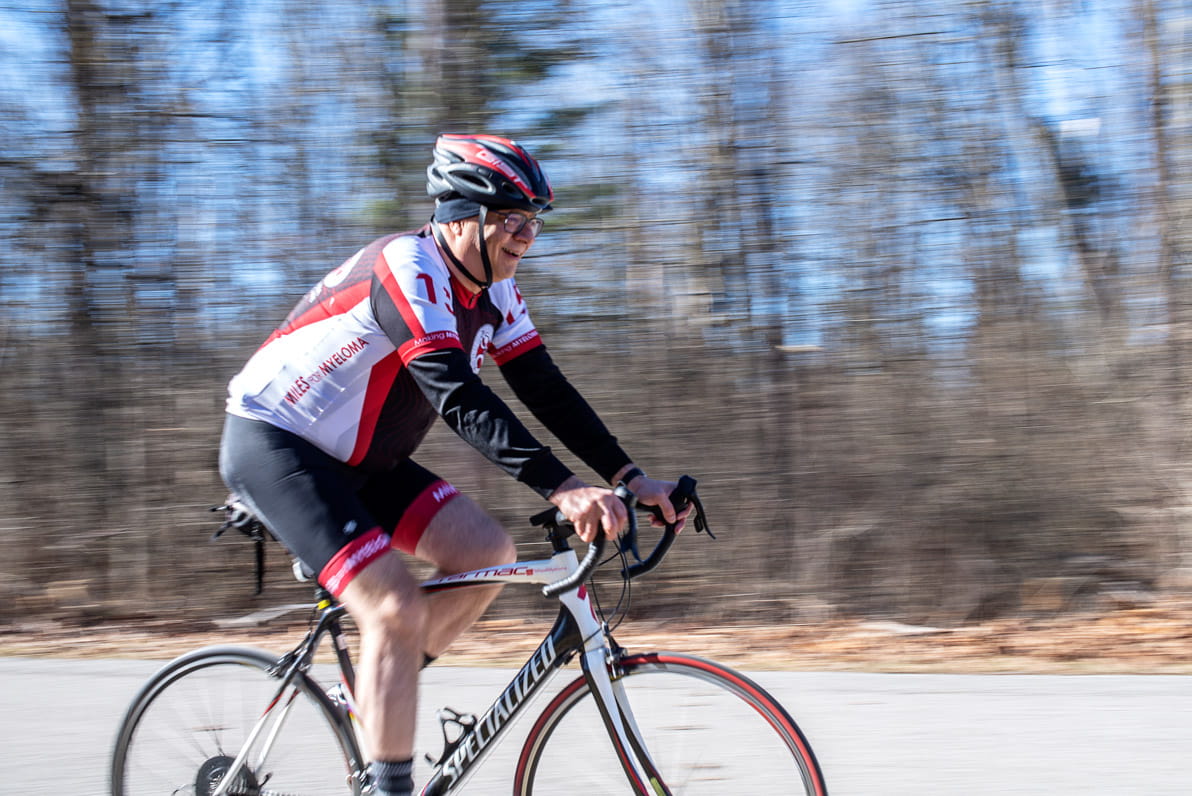 RAFAT ABONOUR, MD , and his Indiana University School of Medicine colleagues can see the day coming when there’s a cure for multiple myeloma. Where patients once had a grim prognosis, many now live with the disease for decades. New treatments are in the pipeline. Abonour, and IU, lead the charge.

But to understand what’s driving Abonour’s search for a cure, it helps to understand how much Abonour loves his patients­­—and how he responds when he loses one to the disease. A few years back, when one of his patients died, Abonour drove 100 miles to deliver a graveside eulogy. He wrote it by hand. On five pages. And he said the man should have a front-row seat in heaven.

In another case, Abonour called to check on a patient’s wife—three months after her husband died.

More recently, Abonour spent several hours over two days at the bedside of Myron Gill, a longtime patient, who was near death. He swapped stories with the family—some that make you laugh and others that make you cry. But there was also a moment when he leaned in and told Gill how much he admired him —and how much he loved him.

“I don’t know that there’s words to describe it,” said Michael Davis, Gill’s nephew, who recounted the story. “But he is sitting there grieving with you as a friend and an extension to your family.”

Abonour doesn’t just love his patients. He considers them “the nicest people in the world.” Myeloma, a cancer of the blood that originates in the bone marrow, tends to strike people over 60. They are folks who have done some living and who have a deep well of experiences. Because research is already extending lives—with Abonour’s help—he has years to hear their stories and to understand the dreams they have left.

“They never stop wanting to do the next thing—to go on vacation, to go see a grandson,” Abonour said. “Life is about that journey. And when you see somebody who has been able to accomplish that, it’s just an amazing reward.”

And then there is the unusual ritual Abonour performs each year that binds him further to his patients and their families: a bicycle ride of 150 miles or so that’s, ostensibly, a fundraiser. To Abonour, though, it’s more. In that graveside eulogy, he described it as “a long journey of suffering and companionship.”

For Abonour, so much is about the journey.

ABONOUR'S OWN journey began in Damascus, Syria, where he grew up. His early life helps explain his capacity for empathy. His younger brother Nasser, he remembers, was a beautiful boy with a lovely voice and a big personality. In Abonour’s memory, he was perfect. But, at six years old, Nasser developed a respiratory infection. It led to seizures. Soon, his brother fell into a vegetative state. For six years, Abonour helped his mother care for Nasser—the feeding, the bathing, the ups and downs of hope and hopelessness. While he didn’t know it at the time, the experience planted seeds of compassion and prepared Abonour for his vocation in life. “I saw what it’s like to have a chronic disease,” he said. “I understand what a family needs.”

Abonour was drawn to mathematics. But, in his mother’s eyes, medicine was a better career, and he followed her wishes. Initially, he hated medical school, with all its memorization. Then he started seeing patients. That’s when Rafat Abonour found his calling.

In 1984, Abonour’s journey led him to America. He landed at the University of Wisconsin and its bitterly cold winters. There, during his residency, he first encountered myeloma patients. At the time, there were no FDA-approved treatments targeting the disease. Most patients lived no more than a couple of years from diagnosis. Yet Abonour found himself growing attached to them and doing what he could to make them comfortable.

Fast forward to 1995, when Abonour arrived at IU. His niche, at the time, was gene therapy. But within a few years, Abonour began looking for another path. He realized that, at IU and most other medical centers, few researchers were paying much attention to multiple myeloma. So scant was the research, some referred to it as an orphan disease.

At the time, Abonour knew very little about myeloma other than that the prevailing treatment—a combination of chemotherapy and stem cell transplants—was wildly unpredictable in its effectiveness. So, he began seeing patients. And starting clinical trials. Patient by patient, Abonour began building a myeloma program.

The more he got to know his patients, the more he came to loathe myeloma.

Even today, patients break bones or suffer kidney damage before multiple myeloma gets diagnosed. And while some patients go into long term remission—a functional cure, he calls it—others suddenly relapse and begin a steep decline. “I just hate this disease. It is a horrible disease,” Abonour said. “I know that everybody will eventually pass away—I’m not going to change destiny. But I want them to live the life that they have dreamt of.”

TODAY, ABONOUR, the Harry and Edith Gladstein Professor of Cancer Research, and his colleagues at the Indiana University Melvin and Bren Simon Cancer Center are currently treating more than 1,000 myeloma patients. The center has become the first in Indiana, and one of the few in the country, to introduce CAR T-cell therapy, a new form of immunotherapy, to multiple myeloma patients. And IU is advancing research on several fronts.

Larry Einhorn, MD, has watched Abonour build the myeloma program through “blood, sweat and tears,” and become a leader in the field.

IU Simon Cancer Center Director Patrick J. Loehrer, MD, said IU’s myeloma program is one of the strongest clinical programs in the country. “It is my hope that in my lifetime,” Loehrer said, “we will indeed see this curable for most patients.”

Ken Anderson, MD, the Kraft Professor of Medicine at Harvard Medical School and a specialist in multiple myeloma, credits Abonour with helping standardize the practice of multiple myeloma care. “He’s helping to make science count for patients,” Anderson said. “And giving the gift of hope and of life to patients and their families. There’s no greater gift than this.” 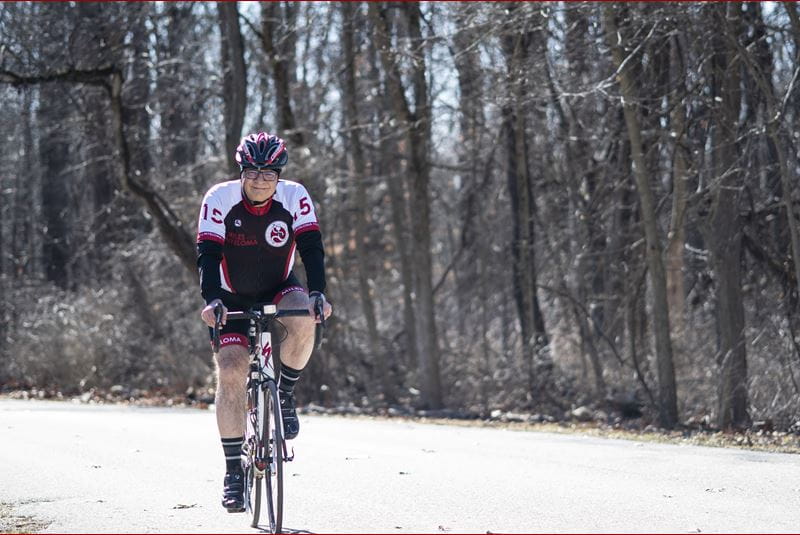 AS RECENTLY as a decade into Abonour’s stay at IU, grant funding for multiple myeloma research was still scarce. He knew philanthropic support—with its ability to fund new ideas and generate early data that can prompt grants—was crucial to his cause.

So Abonour began talking with his patients about how to generate more money for myeloma research. Some suggested a 5K run, but Abonour wanted something different. His patients were coming to see him from all over Indiana. So, he reasoned, why shouldn’t he go see them? With Tom Scheer, the patient he would later eulogize at the graveside, he began Miles for Myeloma, an event that, since its inception in 2004, has covered more than 2,600 miles and raised more than $6 million.

In the early years, the annual trek across Indiana combined both running and cycling. Eventually, it morphed into just a cycling event. Staged over two days, and supported by volunteers, the 150-plus mile ride is a logistical marvel.

Over its history, Miles for Myeloma has launched from Ohio, Illinois, Missouri and places around Indiana. Volunteers mark the routes with signs. They ferry water, food, first aid and bike parts along the route in support vans. The ultimate destination is a finish line in Indianapolis, followed by a banquet and research panel discussion at the Scottish Rite Cathedral. But Abonour designs a route that veers into towns and farm communities where his myeloma patients live.

In 2014, Abonour steered a ride that began in Terre Haute to the Clay County farm of Ryan and Lois Collins. When Abonour began treating Ryan, they made a connection over cowboy boots. Ryan had a colorful collection he wore to appointments. Abonour was always impressed. Eventually, he picked up a pair of his own in Texas and began wearing them on days Ryan came in for checkups.

When the cyclists rolled up to the Collins farm, Ryan gave Abonour a ride on his combine, and they let the doctor wear one of Ryan’s cowboy hats. Lois credits Abonour for extending her husband’s life years beyond another doctor’s initial prognosis. She also credits him for giving Ryan the heartfelt advice to stop further treatments when they promised only more pain. “You’re a Godly man,” Abonour said. “Go home.”

Three months after Ryan died, Lois was standing outside her farmhouse when her phone rang. It was Abonour. He was checking in to see how she was doing. “I don’t know how many doctors do that,” she said. Later that year, the riders returned to the farm for a visit. By then, Lois had sold some of the farm equipment. And she gave Abonour a check for Miles for Myeloma—for $8,000.

Last fall, the ride began in Angola, in northeastern Indiana. It stopped in Kendallville, where Mayor SuzAnne Handshoe is one of Abonour’s patients, and her city engineer, Scott Derby, is a regular rider. She had snacks for the riders and their entourage in the town library. And then people began sharing why they were there. “It was very emotional to hear the stories,” she said.

Near Marion, Indiana, on a wooden rail-to-trail bridge, Rabi Abonour—Rafat’s son and a regular Miles rider—hit a patch of ice and took a nasty fall. The result was a broken hip, an injury that required immediate surgery. Now, several months removed, Rabi is still recovering, but he’s back on a bike, training in anticipation of joining the next Miles for Myeloma.

His crash—and another the same day in Indianapolis that was less severe—prompted some of Abonour’s fans to question whether the ride should continue and whether Abonour—a preeminent cancer doctor—should be leading the pack. Abonour says a cycling event will always have safety concerns, but with some precautions, he thinks it can be even safer. Rabi has no hesitation, either. Miles for Myeloma, he said, is how his father “goes the extra mile.”

“As long as there is myeloma, and as long as he can physically get on a bike, he’s not going to stop.”