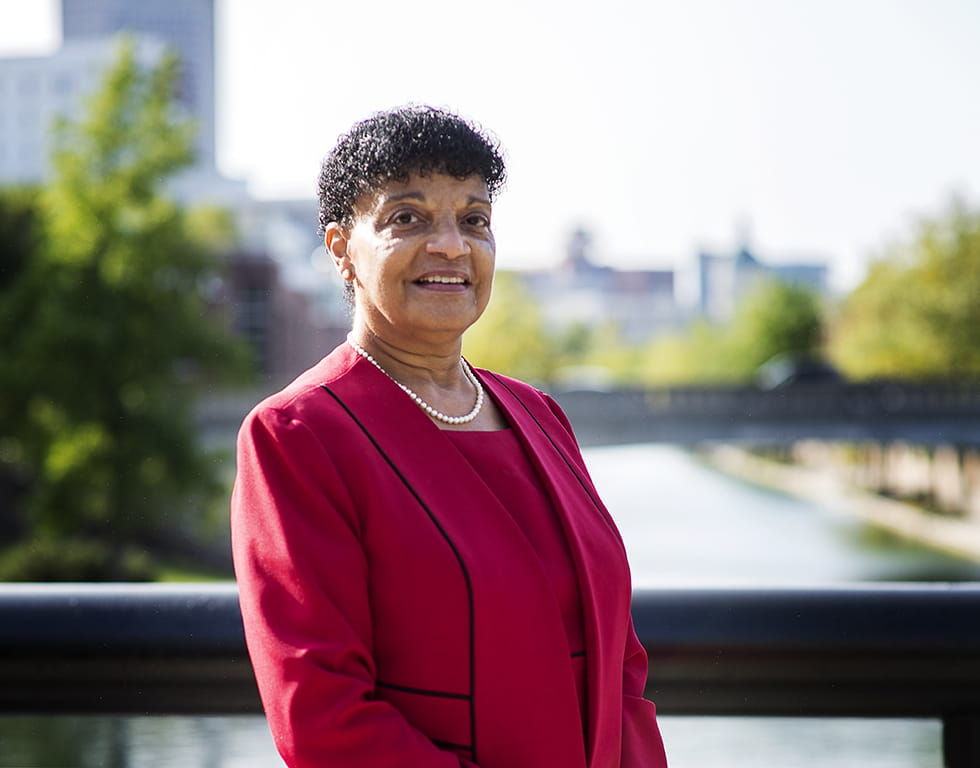 PATRICIA TREADWELL'S history with IU School of Medicine goes way back—to her beginning, when she was born at a women’s hospital in what is now Coleman Hall on the Indianapolis medical campus. She would become one of the School’s first Black residents in pediatrics and the first Black woman to rise to the rank of full professor with tenure, teaching at the school for more than 30 years.

Treadwell’s history with the medical school also covers some unpleasant ground. As a senior at IU-Bloomington in the early 1970s, she went to Indianapolis for a medical school admissions interview, during which a faculty member told her simply: He didn’t care to have women or African Americans in his classes. Treadwell turned her sights elsewhere, and earned her medical degree from Cornell University.

After medical school, and the enlightenment of living in racially diverse New York City, Treadwell, MD, came home to Indiana for her residency in pediatrics. During that year a Black male resident had been arrested by campus police for running across campus at night—from Riley Hospital to University Hospital, where newborn deliveries took place at the time. Pediatrics Chairman Morris Green informed police there would be other Black residents making the run, and there were no further arrests.

For her part, Treadwell’s experience was less dramatic, but still notable. She encountered patients whose families didn’t want their child to be treated by a Black doctor. In each case, Green apologized and said the patient wouldn’t return to the hospital. To Treadwell and others, his concern meant a great deal.

“We as a group needed someone at that position—he was head of the hospital, head of the pediatric program—who anticipated problems and was willing to address those head on,” Treadwell said.

More than four decades later, Treadwell, now a professor emeritus of pediatrics and dermatology, has been tapped to serve a similar role for a new generation of IU School of Medicine students: Special Advisor to the Dean and the school’s Chief Diversity Officer.

Dean Jay L. Hess created the position in June, in the aftermath of the brutal murder of George Floyd in Minneapolis and the national reckoning that began afterward. It was one of the tangible steps he identified as necessary to ensure that IU School of Medicine is welcoming and inclusive of every member of its community.

Treadwell will advise Hess on matters of diversity, equity and inclusion across all areas of the school’s mission. “I know there is much work to be done,” Hess said. “But this is a strong step in effecting true change.”

Apart from the national discussion on race, Treadwell said there was interest from underrepresented students in having a go-to contact.

“There are other people in the school doing this work,” Treadwell said. “I see my position as a little bit of overview, collecting information when questions come up in order to try and answer those and bringing my perspective directly to the Dean. I saw that as what he was asking me to do.”

Black students account for 7.9 percent of enrollment at IU School of Medicine—slightly above the national average for medical schools. Treadwell wants to make sure their experience here—and those of other underrepresented minorities—is a good one.

“I think we have to have a good climate. The students don’t feel it is always welcoming—that diversity is appreciated,” she said. “We know that diverse students, diverse residents enhance the academic atmosphere and they need to feel appreciated, and need to feel supported.”

Beyond serving as an advocate for underrepresented students, Treadwell said she intends to use her position to raise awareness about the health disparities minority populations face.

Aside from her personal story, Treadwell has considerable experience—both in medicine and with regard to issues of diversity.

For 17 years, she served as Chief of Pediatric Dermatology at Riley. She’s served for 15 years as chair of the School of Medicine’s Diversity Council, just to name a few of her roles.

Treadwell, 67, said she doesn’t consider her new task a long-term role, but it’s one in which she is eager to make a difference. “I came out of retirement to do this,” she said. “This is an issue that certainly speaks to me.”