Donning Scrubs Instead of Gowns

This spring, more than 120 medical students offered to graduate early and join the frontline of a health care system grappling with a surge of patients during the COVID-19 pandemic. For those who served, their experiences in the clinic provided lasting lessons. 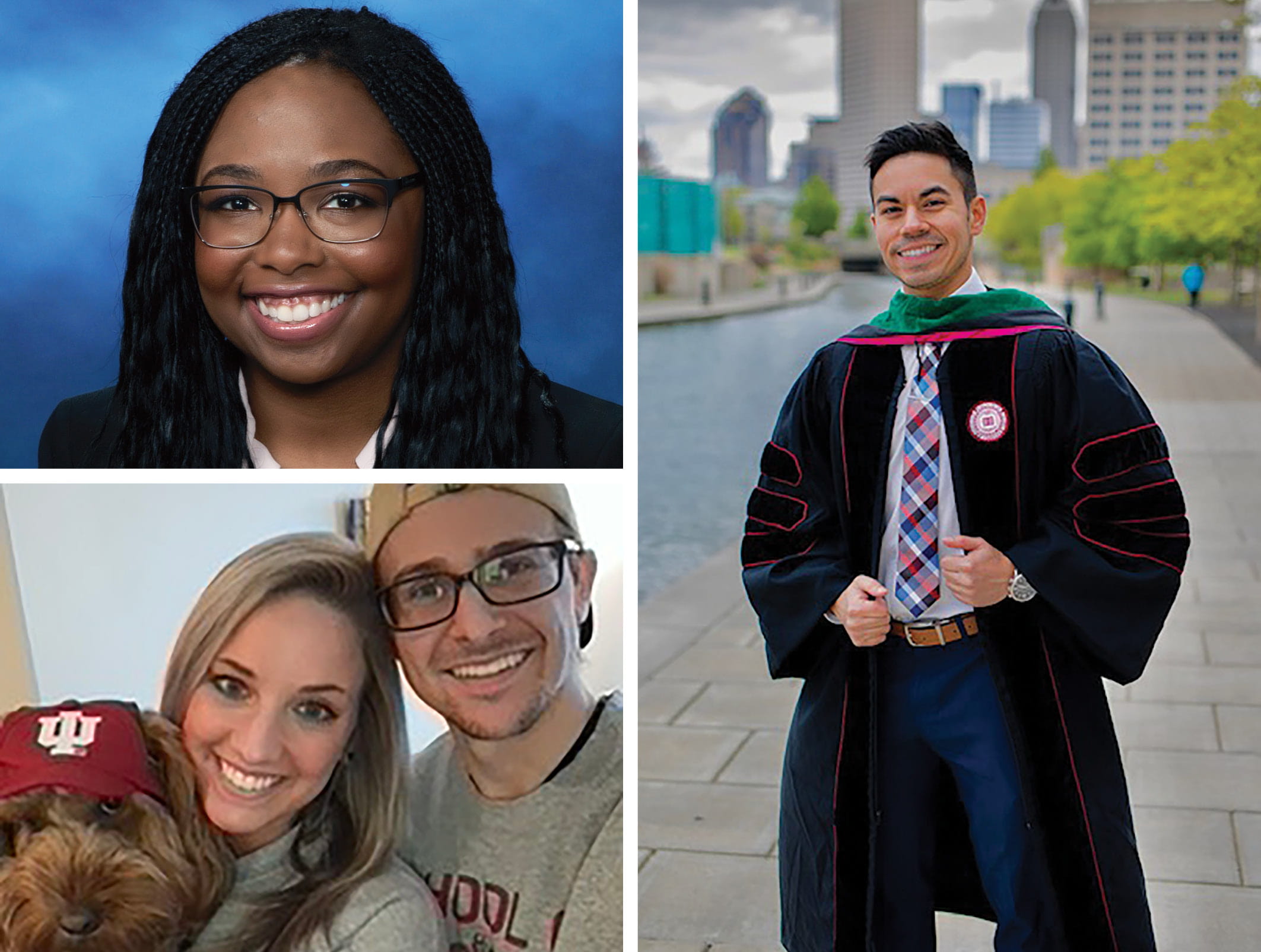 PREPARING MEDICAL STUDENTS to serve the state of Indiana has long been a cornerstone of Indiana University School of Medicine’s mission.

But that took on a special sense of urgency in 2020, when COVID-19 cases first began to surge in March and there was concern Indiana’s health care system might not be able to withstand the tide to come. Gov. Eric Holcomb issued an executive order that was not a draft but a plea for help: It enabled fourth-year medical students to join the pandemic front lines.

The School of Medicine responded quickly, condensing the final month of fourth-year instruction into two weeks and creating a way for students to graduate early. But amid the spread of an infectious disease that was far from well-understood, one obvious question remained: Would students be willing to insert themselves into the fray?

The answer came loud and clear: 124 fourth-year students—more than one-third of the Class of 2020—volunteered to graduate early and make themselves available to serve the state. “I think they felt it was a call of duty,” said Paul Wallach, MD, executive associate dean for educational affairs and institutional improvement. “There was an ask and our students stepped up.”

Beyond concerns about their own health, many of the students who made the leap had to resolve questions about how the work would affect those closest to them at home. That included Arielle Russell, who was still living at home with her parents when the governor’s call came.

Accustomed to volunteering, she hesitated at first. Her parents are not only older, but they also have health issues that put them at a higher risk for bad outcomes should they contract the disease. Russell had questions about how she could serve, while keeping them safe.

Reassured by the promise of ample protective gear and other precautions, Russell, MD, took a monthlong assignment at the Richard L. Roudebush Indianapolis VA Medical Center. She also began limiting contact with her parents.

She served in an emergency department split in half—one area for suspected COVID patients, one for everybody else. Her duties primarily involved taking medical histories and writing assessments for attending physicians. But she saw the dangers of COVID up close, responding to patients whose condition deteriorated quickly, including one who died 30 minutes after arrival.

“I’m still at the point where, after I see a patient that passes away, I still tear up because you know their family is hurting and you couldn’t help them,” she said after coming through the experience. “That’s still hard and I don’t know if I will ever get past that.”

Working alongside Russell was David Vega, who would come to see the COVID-19 pandemic from just about every angle in 2020.

In March, Vega had just returned from a global health elective in Kenya, and a brief stop to see family and friends in Florida, when he fell ill. His positive COVID test result came on Match Day. Vega had symptoms such as fever, chills and muscle aches, and it took him roughly three weeks to recover. It took him less time to answer the governor’s call. “Knowing that I had it and developed some sort of immunity to it, I felt a little less scared about the risks,” he said.

Vega graduated early, and served a one-month stint alongside Russell at the VA Medical Center. There, he served mainly in a part of the emergency room set apart for patients not showing COVID symptoms. But he was grateful for the preparation it gave him for his next destination—the residency program at the University of Miami. At the time of Vega’s arrival in late June, it was becoming one of the nation’s hottest spots for COVID infections.

Charles Luke Scheel, MD, was a student at IU School of Medicine—Northwest-Gary when the call came. He wanted to take a spot on the frontlines to potentially spare older doctors from some of the encounters of frontline work. Scheel spent more than a month working from the Marram Health Center in Gary, reaching out to vulnerable populations, such as the homeless, with testing and care. He was struck by their gratitude. “They were just so thankful to have us there testing them—to give them that peace of mind,” Scheel said. “And that was the best part of it.”

Like Scheel, Aaron Zelikovich was based at Marram. He did remote consultations and performed COVID testing at senior facilities and homeless shelters. The goal, Zelikovich said, was to identify and get early treatment for patients who might not know they were infected.

The clinic was a 10-minute walk from the Gary campus, and at the same place Zelikovich did his family medicine rotation a year before. In other words, he was on familiar turf. “For me, it was a very big opportunity to give back to the community that I’ve been able to be a part of for the past two years.”

Now a Weill Cornell neurology resident at New York’s Presbyterian Hospital, Zelikovich knows some medical schools kept their students at home in the spring. He is glad to have been a part of the IU School of Medicine’s response to engage fourth years in the pandemic response. “I’m proud of the school stepping up,” he said. Like his classmates, Zelikovich said the early experience was personally helpful. He’s grateful to have seen few patients with active COVID-19 in New York. But he felt he was ready all the same. “I feel Indiana University School of Medicine provided me with excellent training so that I could hit the ground running in residency,” he said.

Scheel, now a psychiatry resident at Roudebush said the COVID duty made him familiar with populations at greatest risk of complications, as well as the various COVID tests. “The early graduation prepared me for residency by giving me my first taste of autonomy and giving me exposure to COVID health care,” he said.

That experience has been helpful to Russell also. She now treats COVID patients regularly and feels more comfortable doing so than some of her colleagues who didn’t share her early trial.

For Vega, who entered the national epicenter of the pandemic when he began his residency in Miami, at least one positive came from his experiences with COVID-19. “Overall,” he said, “it has transformed me into a more empathetic physician and has helped me understand the severity of this virus.”

Each of these students were scholarship recipients at IU School of Medicine. Each saw it as their duty to give back. Wallach is pleased by the response of the residents who were redeployed, the faculty and staff members who adjusted the curriculum, the students who remained flexible, and the graduates who responded to the needs of the moment.

“IU School of Medicine stepped up to take care of the state of Indiana,” he said. “Our faculty, residents, students and staff have made us proud.”