Budding Hope to Save Sight 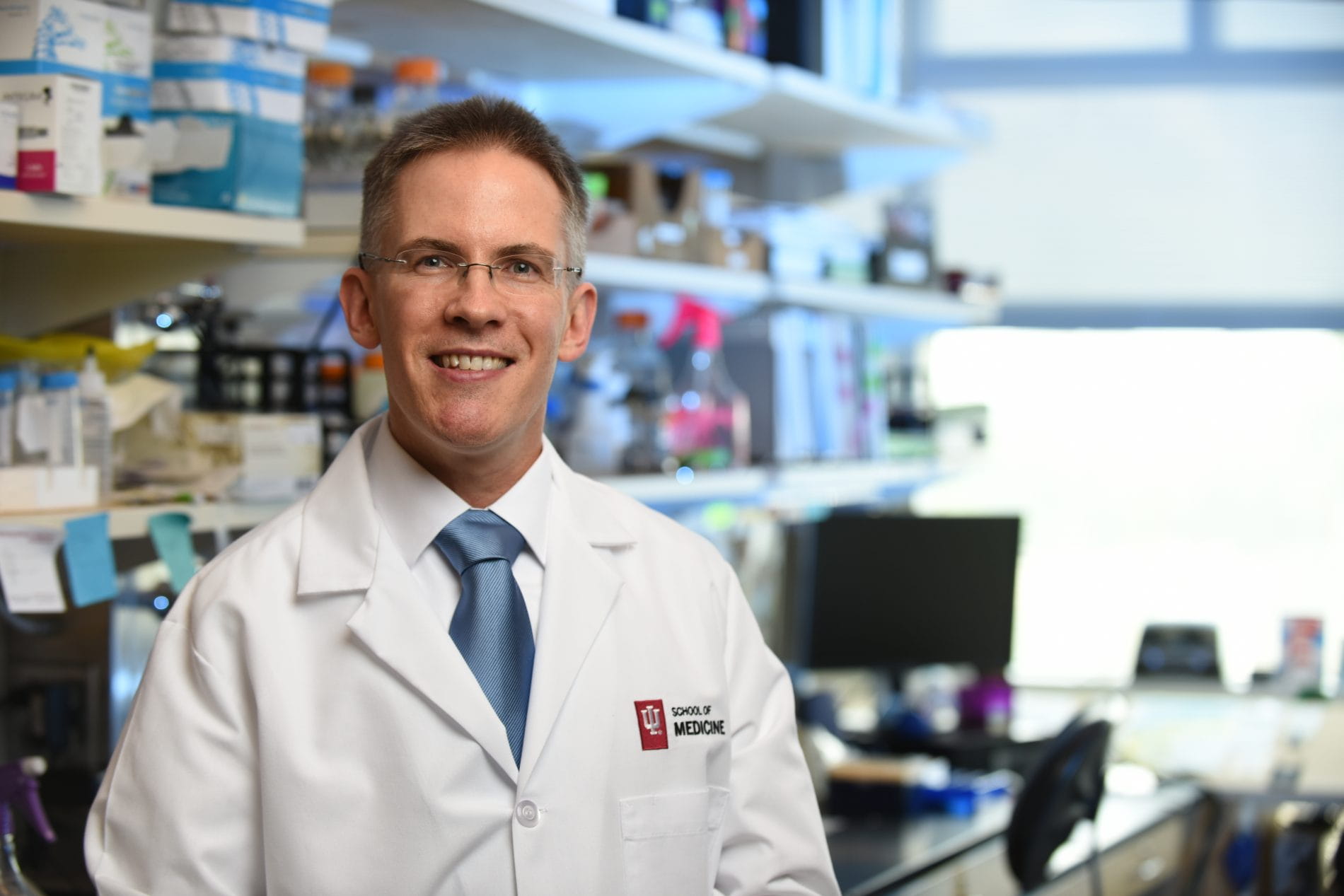 Dr. Timothy W. Corson in his lab at the Eugene and Marilyn Glick Eye Institute.

COMBING THE SCIENTIFIC literature, Tim Corson, PhD, searched for a new way to treat macular degeneration, the deterioration of part of the retina. It led to him to an unlikely place.

Or more accurately, a medicinal compound the orchid produces.

Patients diagnosed with wet age-related macular degeneration spend their golden years in a gauzy haze. Inside their eye, abnormal blood vessels sprout underneath tissue in the center of the retina. These vessels leak fluid, creating scar tissue. Rapidly, a dark spot forms in the center of vision, making it a challenge to read, drive and recognize friendly faces.

Currently, existing drugs only work in 70 percent of cases. But they’re delivered through an invasive method—multiple monthly injections into the eye.

In the future, a synthetic version of the compound from the orchid might be the basis for a drug delivered without monthly injections—and with just a drop in the eye.

Corson’s research is just one example of the pioneering work unfolding at the Eugene and Marilyn Glick Eye Institute, which opened in 2011 and uses 77,000 square feet to house research, clinical and administrative operations for the Indiana University School of Medicine’s Department of Ophthalmology. An additional 15,700 gross square feet also became available last summer after the School of Medicine committed $6 million in funding.

By investing in facilities and young researchers like Corson, the medical school is hoping to nurture a culture that produces groundbreaking treatments. Implicit is the understanding that it takes time and resources to make an impact.

When Corson researched the compound, called cremastranone, he noticed it specifically targeted the cells that power the growth of rogue vessels. However, there was a hang-up. You need a lot of orchids, and it’s a challenge to isolate and alter natural cremastranone.

So, Corson contacted a chemist and longtime collaborator in South Korea. They spent the next three years screening more than 200 synthetic versions of the compound. In 2014, they landed on the right one: SH-11037.

“We’ve been studying it ever since,” said Corson, who oversees a lab housed at the Glick Eye Institute.

Five years ago, his lab demonstrated that the synthetic compound has a significant effect on the mechanism that drives vessel formation. In 2016, they explored its pharmacological activity in animal models, showing it halts vessel growth without toxic side effects. It doesn’t affect retinal function. And the compound works even better together with current drugs.

Corson cautions that there’s much work to be done, but his optimism is evident.

“There is a good chance that we may need to adjust the structure before we have a drug candidate,” he said, “but we haven’t seen any red flags so far.”

To learn more about ophthalmology research or make a gift, contact Andrea Spahn-McGraw at anspahn@iu.edu or 317-278-2124.