Plans for a new campus in Indianapolis reflect ambitions for a state-of-the-art learning community and world-class academic health center. 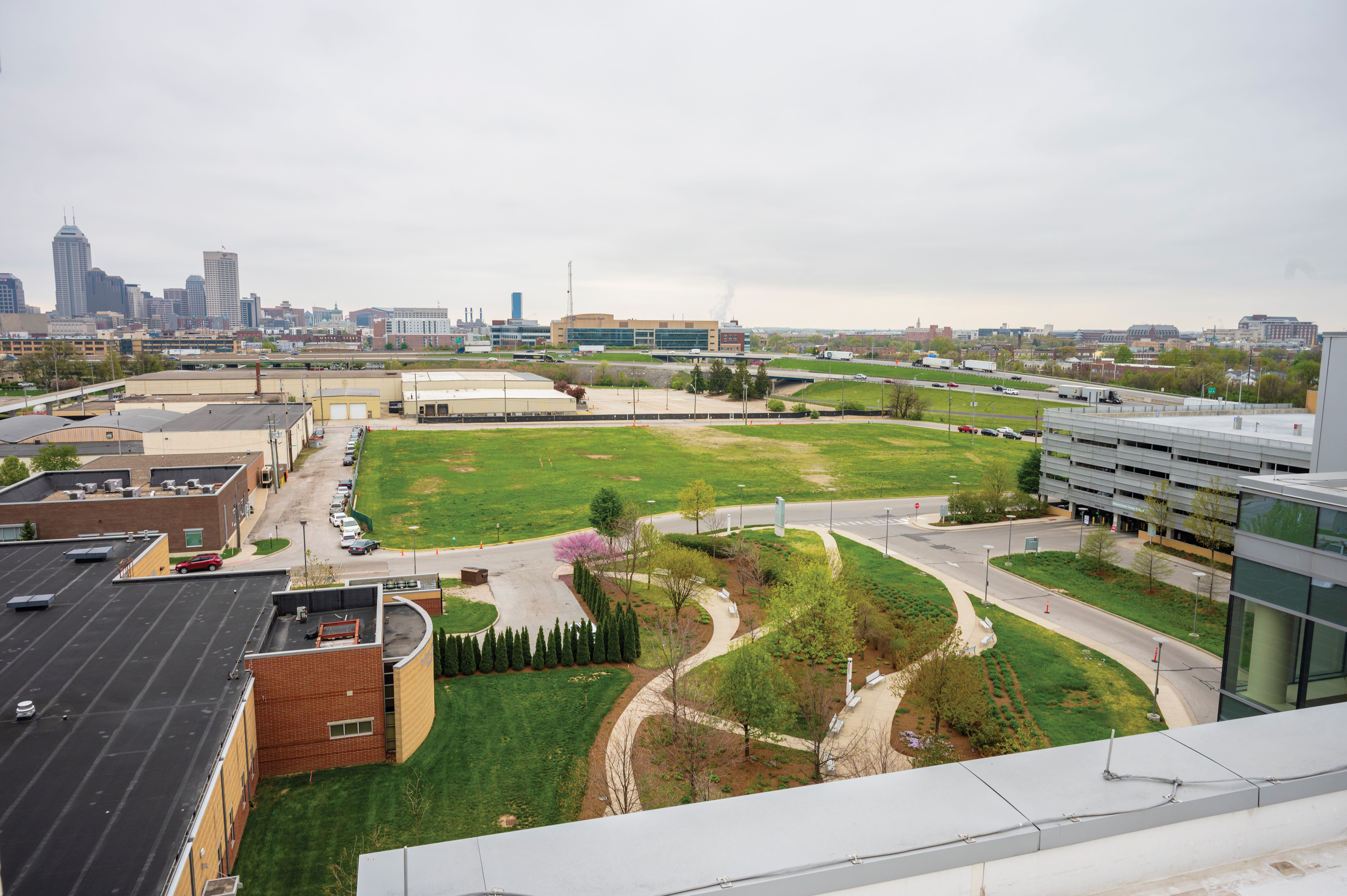 A view from atop the Neurosciences Research Building offers a glimpse of the footprint for the School of Medicine’s future Indianapolis campus.

LESS THAN four years from now, if timetables hold, IU School of Medicine will open a new Indianapolis campus—one designed with state-of-the-art research space, “learning communities” to bring students and faculty closer, and an airy indoor atrium where colleagues in a post-pandemic world can meet up and share a cup of coffee.

Situated south of 16th Street along a bend of Interstate 65, it will have one of the most visible addresses in the city. The new campus will sit across from a massive new IU Health facility that will consolidate Methodist and University hospitals.

Along with the amenities and its location, Dean Jay L. Hess says the new campus will represent a capstone to a decade of efforts to build and nurture the relationship between the School of Medicine and IU Health, which has seen an increase in collaboration and a growth in research.

“This is more than symbolic. This is what we aspire to be—a national, world-class academic health center,” Hess said.

In addition to a much-needed upgrade, Hess said the new campus will make IU School of Medicine even more attractive to prospective students and faculty recruits. “This is our flagship. We are one school across the state, but we have a large center of gravity in Indianapolis,” Hess said.

While details are still being finalized, plans call for a 300,000-square-foot medical school building—perhaps as high as eight stories—to occupy a place just south of the Neurosciences Research Building and Goodman Hall.

A substantial amount of research space will remain in its current location on the IUPUI campus, as will some clinical departments, such as those with ties to Riley Hospital for Children at IU Health. But the new campus will be home to most classrooms, lecture halls, a surgical skills and robotics center and small group meeting rooms.

While the building will be oriented around a large, naturally-lit atrium, one of its most important features will be smaller “learning communities” aimed at building connections between students and faculty—shrinking the feel of the largest medical school in the country.

Akin to neighborhoods in a larger city, these areas will feature lounges and kitchenettes and small group study rooms for segments of the student body. Offices for academic support staff, along with some of the faculty currently teaching the curriculum, will also be nearby.

“This new facility will create a community of learning and an environment that supports professional development,” said Paul Wallach, MD, executive associate dean for educational affairs and institutional improvement. “Learners will feel as if they have entered an educational home, with space that supports creative learning approaches and faculty mentorship. That’s really exciting for me.”

In that sense, it is an effort to apply lessons from the School of Medicine’s regional campuses in other parts of the state, where faculty and students are in closer proximity and know each other better. Hess said such an atmosphere aids student wellness, as well as academic performance.

“We’re designing this building to help build community and ensure the students won’t fall through the cracks,” he said.

By the time it’s completed, the project’s conception and planning will have been a decade in the making. Not long after Hess’ arrival in 2013, IU Health developed a strategic plan that included a recommendation to shut down University Hospital and move its functions into a consolidated facility closer to Methodist’s current location.

Hess worked with IU Health to ensure the School of Medicine had a place in the new vision. IU Health will contribute to the medical school building’s construction. The remaining funds will come from a combination of state funding, private grants and philanthropic gifts. The School and the hospital, as well as Goodman Hall and the Neurosciences Research Building, will be connected in other ways—through both ground level and above-street walkways.

Hess envisions a day in the future when a medical student in the green space of the quad can peer up at the medical school tower, and across to the hospital, and see all three of the missions of an academic health center—education, research and health care—coming together.

“The building is symbolic of the progress we have made in creating an academic health system that serves the state of Indiana, but at the same time is becoming a national leader,” Hess said. “And we’re well on the way.”