No one had to teach Liana Apostolova, MD, to read. At age 4, she wanted to know what the words in books meant, so she sat down and taught herself.

“I’ve always been a very curious student, one that gets inspired by learning,” said Apostolova, Distinguished Professor and the Baekgaard Professor of Alzheimer’s Disease Research at Indiana University School of Medicine.

Apostolova’s intellectual curiosity has directed her research interests and driven a remarkable career in medicine. She now leads IU School of Medicine’s top-funded research program supported by the National Institutes of Health (NIH), the Longitudinal Early-Onset Alzheimer’s Disease Study (LEADS). This study will enroll and follow 500 cognitively impaired and 100 cognitively normal participants ages 40 to 64 with the goal of discovering biomarkers that will help physicians better diagnose and care for patients with this form of Alzheimer’s disease.

“We identified a niche in Alzheimer’s which was these young-onset patients,” Apostolova said. “They hold unknown facts and potentially hints for cures for Alzheimer’s. They can help us understand how the disease manifests and progresses.”

Since the early 2000s, Apostolova has delved into development of imaging and genetic biomarkers for Alzheimer’s disease, becoming a leading national expert. At IU School of Medicine, she is clinical core leader for the Indiana Alzheimer’s Disease Research Center and a professor of neurology, of radiology and imaging sciences, and of medical and molecular genetics. 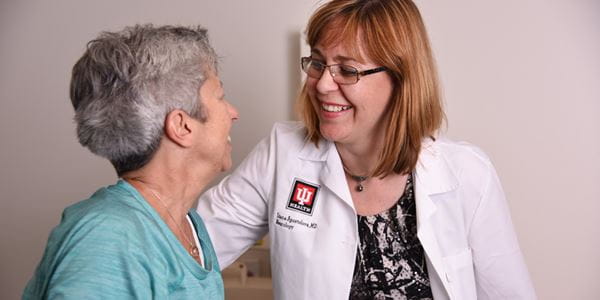 Her journey into medical science started in Bulgaria, where she grew up with the influence of two parents who were scientists and several extended relatives in health care professions.

“My mom is a biochemist and my dad an organic chemist. I’ve always wanted to be a scientist—the desire to be a doctor came later,” Apostolova said.

It was her mother who persuaded her that being a physician-scientist would open more opportunities, so she applied for medical school, which, in Bulgaria, is a seven-year program directly following high school. Her training included the same Western medicine as in the United States; however, there was less imaging technology in Bulgaria to aid with diagnoses. The resulting sense of solving a mystery piqued her intellectual curiosity. 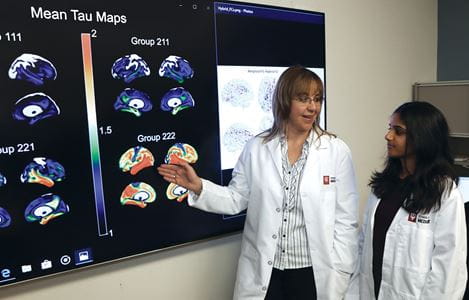 “When I had my neurology rotation, I fell in love with the brain and the way diagnosing works,” she said. “In Bulgaria, there was no MRI, the diagnostic process was logical, and you had to reason and appreciate the complexity of the nervous system, from brain cells in the outermost cortex to nerve endings in the toes. A lesion anywhere on that path can cause the patient’s symptoms. It was extremely intellectually stimulating.”

“The U.S. has the best opportunities for aspiring young minds who want to solve problems,” she said.

Following her residency, Apostolova further refined her research and clinical interests through a fellowship in behavioral neurology and dementia at UCLA, working under imaging expert Paul Thompson, PhD and dementia expert and thought leader Jeffrey Cummings, MD. She applied for an NIH training grant during her second year of fellowship and became a junior faculty member, starting her own lab at UCLA and advancing from a fellow to the rank of associate professor during her 12 years there.

It was also during this time that she fell in love with clinical research, engaging patients in opportunities to directly impact their treatment with the aim of advancing scientific knowledge and improving care for others.

“Growing up, I didn’t realize I might love the practice of medicine, but I fell in love with patients and wanted to do clinical research,” she said.

Lone woman at the podium

Because of her work at UCLA with emergent and innovative imaging techniques, Apostolova was often in the spotlight—typically the only woman presenting at conferences in a male-dominated field.

“It was all white, old men. All of them,” she said. “I would find myself as a very junior presenter at the podium. I remember my first presentation, my voice was trembling so bad, I mumbled, ‘oh god,’ into the microphone. I had my stage anxiety for sure. I was unknown, had an accent and was young. But it was a good presentation, and people asked challenging questions that I was able to answer.”

Apostolova is no longer an unknown face at the podium. She is the principal investigator on many grants supported by the NIH, foundations and industry organizations, and she has received many prestigious research awards and co-authored hundreds of publications. 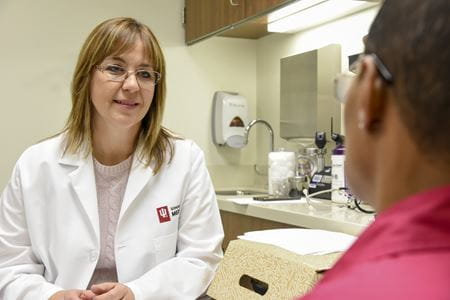 Through her scholarly work, she connected with colleagues at IU School of Medicine, including Andrew Saykin, PsyD, a preeminent imaging geneticist who directs the Center for Neuroimaging and the Indiana Alzheimer’s Disease Research Center (IADRC). He recruited Apostolova to IU, where she thrives as leader of the $80 million, NIH-funded LEADS study, involving collaborators from many other institutions.

“It became clear that we shared a common interest in the emerging field of imaging genomics, given its potential to provide insights into Alzheimer’s and related disorders of aging,” Saykin said. “When the opportunity arose to recruit Dr. Apostolova to IU, I knew that she would have a major impact extending beyond IU.”

Indiana University also recruited Apostolova’s husband, Valentin Pentchev, as director of information technology for the newly created IU Network Science Institute, a presidential initiative with a mission to foster collaborative, interdisciplinary network science approaches to understanding and improving the complex challenges of our world. Apostolova is a member of the institute’s advisory council.

Constantly led by her intellectual curiosity, Apostolova has become an expert in her field, inspiring many other women scientists.

“Now the imaging field of Alzheimer’s disease is full of brilliant young women, and some of them have told me I was their role model because I was the only woman in the field,” she said. “It’s humbling to hear you had such a profound impact.”

Apostolova has served as a research mentor to more than 70 undergraduate, 23 graduate and five post-graduate students, as well as nine junior faculty researchers.

Kelly Nudelman, PhD, is among those who consider Apostolova a mentor.

“I think Dr. Apostolova’s personal strengths include her strong motivation and work ethic, as well as her pragmatism and intelligence,” said Nudelman, a geneticist working on LEADS and an assistant professor of medical and molecular genetics at IU School of Medicine. “I’m in awe of how hard she works to keep the LEADS study running smoothly, and how she finds the time and energy to constantly try to build and expand on it, not just to advance research, but also to provide more services and benefits to study participants and their families.” 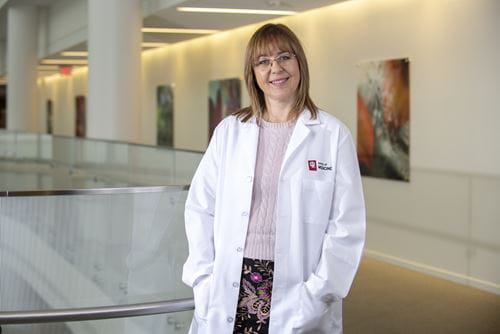 “It’s easy, especially in junior years, to get pulled in many directions. I’ve seen brilliant junior investigators whose careers fizzled and they burned out because they were not focused,” Apostolova said. “I’ve said ‘no’ to some great opportunities that are bold and brave and ambitious—but I said ‘no’ because I wanted to stay focused on my research niche in imaging biomarkers.”

Although a self-described workaholic, Apostolova has learned some valuable lessons about work-life balance. With one child now in college—studying neuroscience—and a 13-year-old at home, she has been mindful not to let her career ambitions override the importance of being present as a mom. While she admired her mother’s work as a scientist, Apostolova strived to be home more with her own children and made a conscious effort to do so.

“I protect time with my kids,” she said.

At the same time, she greatly enjoys the work she does as a physician-scientist. It keeps her intellectually engaged every day as she continues to help unlock the mysteries of Alzheimer’s.

“When you love what you do, you don’t work a day in your life,” she said.