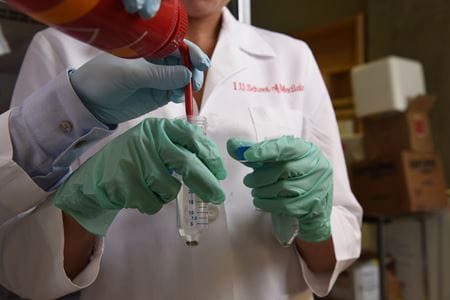 The gloved hands of two researchers, as they work in an IU School of Medicine lab. One researcher is holding a test tube while the other pours a substance from a red bottle into the tube.

Arthur Willis, MD, values the education he received at the IU School of Medicine.   Nearly 60 years ago, he was a budding physician who moved from his hometown in the Northeast to settle in the Midwest because he believed studying in Indiana offered him the best chances of success.

Willis graduated from Indiana University in Bloomington in 1962 and immediately enrolled at IU School of Medicine. Without the experience he gained while training at IU, Willis said he wouldn’t have been the well-rounded, quick-thinking ophthalmologist he was throughout his career.

Decades later, following his retirement, Willis decided to give back to the medical school
that helped shape him. 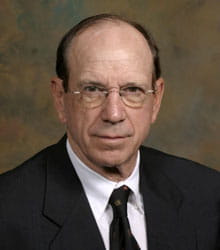 With assistance from the IU School of Medicine Office of Gift Development,
he has outlined plans for a legacy donation to the Department of Ophthalmology.
The funds from this generous gift will be used to create a professorship position bearing his name.

“IU was instrumental in my life,” Willis said. “I just think you should give back
to those organizations that got you to where you are.”

Willis grew up in Delaware. When he applied to attend Indiana University in Bloomington, he already had his sights set on IU School of Medicine: he thought
he’d have a better chance of being admitted to the medical school with an
undergraduate degree from the same institution.

IU School of Medicine provided excellent and wide-ranging clinical experiences—ones Willis said set him apart from his peers once he began residency.

At that time, students completed rotations in what was then Marion County General Hospital. (The facility was later renamed Wishard Memorial Hospital, and is now known as Sidney & Lois Eskenazi Hospital. IU medical students continue to train alongside faculty members at Eskenazi, which still serves as the county hospital.)

Willis completed rotations in a variety of specialties including obstetrics, internal medicine, surgery and anesthesia. These rotations came with unmatched clinical experiences.

“I delivered 20 babies as a medical student. We did spinal taps. We did liver biopsies. We did lung biopsies. You did everything there,” he said. “That experience really prepared me very well. It prepares you to make decisions and gives you a great deal of confidence.”

Completing a rotation with the ophthalmology department as a medical student is ultimately what inspired Willis to become an eye doctor.

The residents in the IU School of Medicine Department of Ophthalmology were friendly and enthusiastic about their specialty. Studying alongside them was an incredibly positive experience in Willis’s life.

After medical school, Willis went on to complete an internship at Wilmington Medical Center in his home state of Delaware. Then his training was put on hold when he joined the U.S. Air Force and served two years during the Vietnam War.

Willis was stationed in Alabama, and he took a job moonlighting as a general practitioner in a small, rural and underserved town there. There was no telling who would need his assistance or what ailments he might encounter in a day; but the wide-ranging clinical experience he gained as an IU School of Medicine medical student served him well during this time.

“It was real seat-of-the-pants medicine,” he said. “You never knew what would walk in the door.”

After leaving the Air Force, Willis completed his ophthalmology residency at the Medical College of Georgia at Augusta University. From there, he moved to Houston, Texas to complete a vitreoretinal surgery fellowship at Baylor College of Medicine.

Willis worked the majority of his career in the Houston area, preserving the sight of countless patients.

Following his retirement about 15 years ago, Willis sold several commercial properties he owned and used the money to create a charitable remainder trust. As the trust’s benefactors, he named two of the institutions that trained him: IU School of Medicine and the Medical College of Georgia.

Philanthropic gifts like Willis’s are essential to ensuring IU School of Medicine can continue to excel in its mission to train expert physicians.