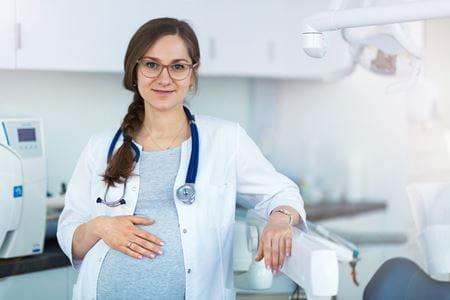 Internal medicine residents at IU School of Medicine who are nearing the end of their pregnancy and are in their first postpartum months will not be required to work long or overnight shifts, according to a new policy adopted recently by the department.

The policy aims to keep both pregnant residents and their babies safe.

Anthony Wood, MD, the chief internal medicine resident who researched and wrote the policy, said there was always an understanding among residents that they would not schedule their pregnant colleagues for lengthy shifts late in their pregnancies.

But there was no official policy ensuring the protection. So, Wood took on the task of creating one.

Some studies have shown that pregnant people who work night shifts, including medical residents, are at increased risk of pregnancy related complications, particularly preterm delivery and preeclampsia, Wood said.

Now,  internal medicine residents in their third trimester of pregnancy and those two months post-delivery will not be required to work more than 14 hours during a shift. They’re also excused from covering any overnight shifts, Wood said. That work instead will fall to the other residents in the department—all of whom were happy to accept the responsibility, he said.

Several other IU School of Medicine departments offer protections to pregnant residents, including the departments of emergency medicine and pediatrics, Wood said.

But to get a clearer picture, Wood contacted 110 residency program coordinators from across the country to inquire about their practices.

According to Wood, some claimed to have policies, but only one provided a copy of a written policy. A handful of others said their program leadership was currently working on a written policy.

Wood suspects many residency programs operate under an unwritten rule that protects pregnant residents, as the Department of Medicine did for decades. But unwritten rules don’t have the same value, Wood said. It also gives future chief residents something to call upon when creating work schedules.

It took Wood about three months to draft the policy. Once it was completed, it was met with overwhelming support from all levels of the department, he said.