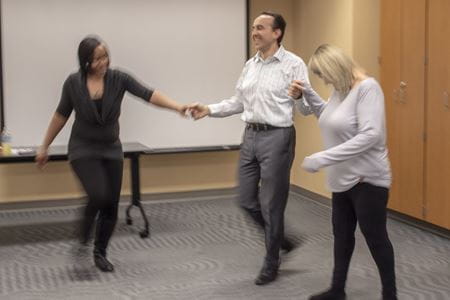 Dr. Dimitrios Stefanidis, dances with participants from the Dace With a Doc events.

With his contagious energy and positive attitude is right at home on the dance floor. With over 20 years of dance experience under his belt, he leads patients and staff through moves that merge his Greek culture and love for dance.

Greek dancing and bariatric patients might seem like an unlikely pairing. But for Dimitrios Stefanidis, MD, PhD, professor of surgery and vice chair of education at Indiana University School of Medicine Department of Surgery, and the chief of minimally invasive and bariatric surgery at IU Health North Hospital has always had a passion for dancing that he wants to share with his staff and patients through a bi-monthly class.

Stefanidis started the program “Dance with a Doc” about eight months ago, with the hopes of sharing his passion for dance as well as helping some of his bariatric patients build a community around an activity that will keep them moving.

“We started this program about eight months ago for the first time, but I’ve been thinking about doing this for years now,”  Stefanidis said. “The rationale behind this is multifold: We’re targeting bariatric patients to participate before or after surgery to encourage activity and fellowship, which are important factors for weight loss.”

His passion for dance started when he was 9 years old. Stefanidis’ parents migrated from Greece to Germany, and to stay connected to his Greek heritage he took dance lessons focusing on traditional Greek folk dancing from the area of Pontus. He would later go on to become a Pontian dance instructor at age 17 for a local society, where he would train with local dance troupes for competitions. Later, he learned Greek folk dances from several other regions of Greece, and once married, took Latin and ballroom dance lessons with his wife.

Stefanidis infuses each event with cheerful joy, greeting every participant as if they are an old friend. No matter how many participants are on hand, the room is always full of life.

Julia Dering, one of Stefanidis’ patients, said she never misses the class.

“The dancing … I love it! It’s helped me so much,” Dering said. “I’ve been able to walk more, do exercises, and I get to see my doctor a little bit more.”

Dering also explained that a reason she became active in this program is for the support and encouragement she receives in being engaged with the other dancers—sharing in the experience on the dance floor.

Stefanidis hopes the program will become more popular and consistent, with groups varying in size from five to 10 people at a time. However, no matter the size of the group, Stefanidis brings the same level of passion and joy to every class because of his love of teaching dance.

“It’s a fun time. It gets the heart rate going, and we typically do a variety of dances,” Stefanidis said. “We generally start slow and try to build up to a faster pace, also depending on who is participating because sometimes we have participants who cannot move as easily due to their weight. So far we have practiced Latin and Greek dances. I have been impressed by how quickly participants pick up the new dances.”

Stefanidis holds this event every other month, generally on Tuesday evenings, at no cost to participants. He said he welcomes anyone to join him in sharing his passion for dancing. Information is usually put out through a private Facebook group made for patients and staff of IU North, but people can sign up by contacting IU North general inquiries line.