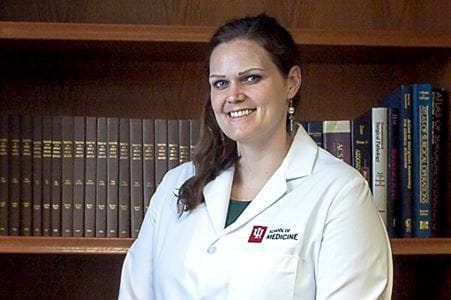 It has been quite a journey for Indiana University School of Medicine Department of Surgery resident Alison Bales, MD, from high school state champion to star college athlete to WNBA professional with the Indiana Fever, the Atlanta Dream, and the Phoenix Mercury. Not the most common path for a doctor, but for Bales the same passion that made her a top basketball star drives her to be the best surgeon she can be.

“I have always found a lot of pleasure in working hard physically and mentally,” said Bales. “I chose surgery because I appreciate our ability to cure disease processes and like most surgeons, I love operating and constantly improving my own surgical skills.”

Bales explained that her love for basketball started at a young age when she began playing at the age of 5. Her father, himself a former college athlete, encouraged his daughter to pursue basketball as a hobby. At the same time her mother, who was a trauma surgeon at Wishard Memorial Hospital, before moving to Ohio instilled in her a love of caring for people’s health.

“My dad loved basketball but ended up playing football in college, so my love of athletics comes from him,” Bales said.“And my mom is a surgeon, so I grew up around surgery, it started as a child with hanging out in the doctor’s lounge while she went on rounds. I remember my fifth-grade science fair project was an injury prevention evaluation of different area sledding hills. When I got older, I got to go into the operating room with her, I was fascinated.”

Bales recently was inducted into the Ohio Basketball Hall of Fame, which recognizes the achievements of both male and female basketball players in high school, college and professional basketball, as well as successful coaches on all levels. Her Beavercreek state championship teams were inducted a few years ago.

“I found out I was going to be inducted last year,” Bales said. “It’s really cool because basketball was such a huge part of my life, it’s nice to be reminded of that phase of my life, both how hard I worked and what my teams were able to accomplish.”

As a center on the Beavercreek High School girls basketball team,  Bales led the Beavers to Division I state championships in 2001 and 2003. As a senior, Bales averaged 18 points, 9 rebounds a game, and shared the Ohio Player of the Year award. She was a Parade magazine All-American, and a three-time USA Today All-American.

“Alison was not only a great basketball player, but she was an even greater student and individual,” said Ed Zink, Bales’ high school coach.“She was a tremendous role model for all the young ladies in Beavercreek, she was looked up to by all of them, and she took pride in that role. She was a true ambassador, not only for our basketball program but for our school as well.”

After high school, Bales was recruited to play at Duke University. At 6 foot, 6 inches, Bales specialized in blocked shots as the anchor of the Blue Devils’ defense—eventually setting the record as the all-time shot block leader at Duke, and third all-time in NCAA history. In the 2006 NCAA Women’s Tournament, Bales set a then-tournament record by blocking 30 shots in six games—leading the Blue Devils to an eventual runner-up finish in the championship game. A three-year starter, Bales averaged 11.9 points, 7.8 rebounds and 4.4 blocks her senior year, while playing 29 minutes per game.

“I feel so incredibly fortunate to have coached Ali at Duke,” said Gail Goestenkors, former Duke women’s basketball head coach. “The qualities that made Ali an outstanding basketball player are the same that now serve her well in the medical field. Ali combined her work ethic and intelligence on the court and in the classroom to make her one of the best student-athletes ever to play at Duke.”

Graduating from Duke in 2007 with a double major in cultural and biologic anthropology and anatomy, Bales’ immediate focus remained on basketball—the Indiana Fever brought her back to her home state by selecting her No. 9 overall in the 2007 WNBA Draft. Bales’ time with Indiana was followed up by stints with the Atlanta Dream and Phoenix Mercury, as well as three seasons playing overseas in Russia, Turkey, and France.

Announcing her retirement in 2012 from basketball, Bales returned to her other childhood dream: medicine, attending medical school at Wright State University Boonshoft School of Medicine. Exactly 10 years after the WNBA draft brought her back to Indiana the residency match brought her to IU in 2017. Now at the end of her second year of surgical residency, she has been grateful for all the support that her fellow residents and faculty have shown her.

“I still have several years here of residency,” Bales said. “I’m enjoying my experience here. I’ve learned a lot, there are a lot of great surgeons here, so I think that if there were a possibility to stay once I graduate, I would. But I’m not sure yet where my career will take me.”