Tacos, ice cream and a side of gestational diabetes 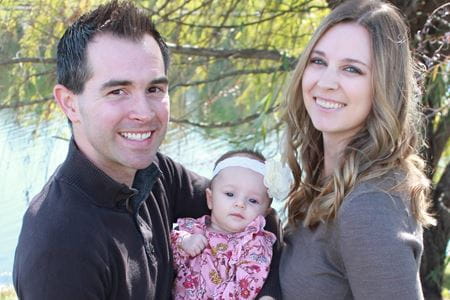 “Why are you getting tested for that? You’re not overweight. There’s no way you have it.”

This conversation with my mom when I was about 25 weeks pregnant was my first experience with a common misconception about gestational diabetes—that the only people who get it are overweight or obese.

“I guess anyone can get it, so they just test everyone now,” I explained to her.

Up to this point, the only thing I knew about gestational diabetes was that I would eventually have to get tested for it. That meant another blood test, this time after drinking a sugary drink that would taste terrible. I’ve never liked needles and can be a picky eater, so those were my biggest concerns at the time. My body mass index (BMI) had always been at a healthy level, and while I may have overindulged a bit in tacos and cookie dough ice cream during the first half of my pregnancy, I was eating a mostly healthy diet, exercising a few times a week and gaining weight at a steady pace. My own thoughts echoed my mom’s: there was no way I would get gestational diabetes.

The day of my glucose tolerance test, I drank a glucose drink an hour before my appointment, and was pleasantly surprised that it didn’t taste as bad as all my friends had warned. I went to my appointment, got my blood drawn and then left to enjoy a Memorial Day weekend filled with burgers, hot dogs, potato salad and cake (and maybe a few more tacos).

But when the weekend was over, I got a call from my obstetrician’s office—my blood sugar had been too high an hour after finishing the glucose drink, and I’d need to come back for another test. When the results from the second test came back, it was official: I had gestational diabetes mellitus (GDM). With no knowledge of what gestational diabetes is or what causes it, I immediately felt some big frustrations.

Christina Scifres, MD is an associate professor of clinical obstetrics and gynecology.

What are the causes?

“GDM happens when a pregnant woman’s pancreas can’t produce enough of the hormone insulin, which processes sugar,” said Christina Scifres, MD, an associate professor of clinical obstetrics and gynecology at Indiana University School of Medicine Department of Obstetrics and Gynecology.

As pregnancy continues, the amount of insulin a pregnant woman’s body needs increases. But in some women, like me, the pancreas doesn’t keep up with changes that make a pregnant woman’s body respond less well to insulin, causing their blood sugar to go up. That can lead to several big concerns, starting with the baby’s blood sugar getting too high.

“Glucose crosses the placenta very easily, so if mom’s blood sugars are high, then baby’s blood sugars are going to be high as well,” Scifres said. “In response to that, babies make more insulin, and insulin actually functions as a growth factor in babies.”

Because of that high insulin, the baby can become too big too quickly, leading to an increased risk of the baby getting stuck in the birth canal during delivery or the need for an emergency cesarean section. Too much insulin can also cause problems when the umbilical cord is clamped. Baby is no longer getting sugar from mom, but is used to producing higher levels of insulin, which can cause the baby to have low blood sugar right after birth.

And there are concerns for mothers, too. Fifty percent of women who have gestational diabetes will develop Type 2 diabetes at some point in their lives.

If those numbers aren’t scary enough, about 7 percent of women have some form of diabetes in pregnancy. Many of them don’t show any obvious symptoms, so getting a glucose tolerance test is the only way to get a proper diagnosis. The condition typically develops toward the end of the second trimester, which is why the American College of Obstetricians and Gynecologists recommends all pregnant women be tested between 24 and 28 weeks of pregnancy. And, contrary to what my mom and I had assumed, anyone is at risk of getting it, regardless of weight.

“A woman’s BMI coming into pregnancy is one of the strongest predictors,” Scifres said. “But then there are other things, like a strong family history of Type 2 diabetes. Race and ethnicity also play into it. People of Hispanic heritage or people who are black have a higher risk of developing gestational diabetes. All those things can contribute.”

Then there are others, like me, who don’t have any of the typical risk factors and still get gestational diabetes. Constant questions of “why me?” helped make the next couple of weeks after I was diagnosed the most difficult of my entire pregnancy. I was frustrated with not understanding how I got diabetes and wondering if I could have done something to prevent it. On top of that, I had to check my blood sugar using a finger stick method four times a day. (Remember my problem with needles? Gestational diabetes helped me conquer that fear very quickly.)

I had to learn to use my blood sugar levels to determine which foods caused it to be too high and what size portions my body could handle. This meant making changes to my diet that included fighting those cravings for tacos and ice cream. Some foods I expected to give me a higher level, like muffins or bagels, didn’t, while others, like cereal or some fruits, did. Exercise and time between meals made a difference, too, making it tricky when checking my blood sugar to know for sure what I could and couldn’t eat.

“All of those things can affect your sugars, which is sometimes really frustrating for patients, because you’re like, ‘I ate the same thing for breakfast yesterday and today and my blood sugar number is different,’ and it can be hard to know why,” Scifres said.

Luckily for most women, the diabetes goes away after the baby is born—something I tried to remind myself of often during those last few months of my pregnancy. In August 2019, my daughter Hannah was born, weighing in at a healthy 8 pounds and 6 ounces. The hospital checked her blood sugar every few hours for the first 24 hours, and her levels were right where they needed to be. I celebrated by eating lots of waffles and tacos during my hospital stay.

Hannah was born in August 2019. Here she is pictured with me and my husband, Dave.

Because I had a mild case of gestational diabetes, it was easier to monitor and keep my baby healthy. Fortunately, it also means that my risk of developing Type 2 diabetes in the future is even lower. But other women aren’t so lucky. That’s why researchers at IU School of Medicine are trying to find more ways to prevent women from getting gestational diabetes in the first place, and for those who do get it, helping them avoid developing Type 2 diabetes later in life.

“Our prior research has indicated that women who are overweight or obese coming into the pregnancy have a much higher rate of complications associated with gestational diabetes, so one of our main focuses of research is how to improve outcomes for those women,” Scifres said.

“There is some data to suggest women who had gestational diabetes who are tested postpartum and have impaired glucose tolerance or prediabetes may benefit from taking the diabetes medication Metformin long-term to help delay their progression to Type 2 diabetes, which is why it’s so important for women to get tested after they have a baby,” Scifres said.

Surprisingly, by the end of my pregnancy, I learned to embrace my diabetes. While the finger pricking and healthy eating required a lot of self-control when all I wanted to do was eat tacos and take a nap, it helped me figure out which foods are healthier for my body and how to eat better-sized portions.

But I still have questions—like why me? Could I have done something to prevent it? And what can I do to help my daughter, who is now at an increased risk, avoid diabetes in her future? These are all questions researchers want to answer, and I’m hopeful someday they will.

In the meantime, I’ll keep trying to eat healthy and exercise when I can, teaching my daughter to do the same, while still enjoying an occasional greasy taco (or two).

Learn more about gestational diabetes research at IU School of Medicine Department of Obstetrics and Gynecology.