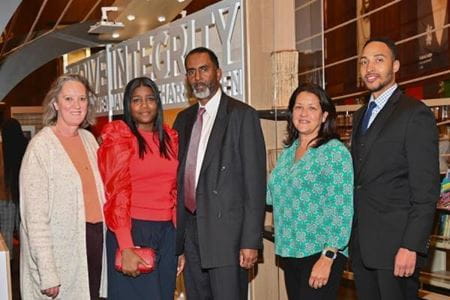 Reilin Moore, MD, was a freshman at Indiana University when trauma surgeon Clark Simons, MD, came to inspire a group of undergrads with big dreams and limited experience. That sparked the beginning of a 17-year mentoring relationship.

“When I first met him, I never in my life had seen a Black surgeon,” said Moore, now Simons’ colleague at Indiana University School of Medicine and Sidney & Lois Eskenazi Hospital in Indianapolis.

When Tyrone Rogers, MD, first encountered Simons, Rogers was an IT professional seeking to shift his career to medical practice.

“I was blessed to come across Dr. Simons. He was someone with whom I could relate. It wasn’t just because he was a Black surgeon, but he understood my cultural journey,” said Rogers, now a general surgeon at Community North Hospital. “His interaction with his colleagues and patients helped to create a vision of what life could potentially be.” 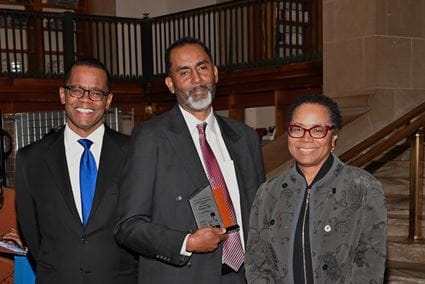 Simons was among 23 local medical professionals honored at the Black Medical Hero Reception hosted by the Indianapolis Public Library’s African American History Committee in October 2022 and was among 12 IU School of Medicine faculty to receive the Dr. George H. Rawls Award.

Just as Simons inspires the next generation of Black surgeons, he was inspired by Rawls, a pioneer for African American surgeons and a lifelong advocate for advancing minority representation in medicine who founded the Master of Science in Medical Science (MSMS) program at IU School of Medicine. Rawls died in May 2020.

“My success has been based upon all those who have gone before me, including Dr. Rawls,” Simons said. “I had the privilege of meeting Dr. Rawls close to 20 years ago, and he has always been an inspiration for me. Dr. Rawls—and so many more individuals I have not met—helped provide the path for me.”

Now it’s Simons’ turn. He considers it vital to reach out to underrepresented minority students—particularly Black males—to show them they can succeed in medicine. Just 5.4 percent of U.S. physicians are Black, compared to a U.S. population that is about 14 percent Black. Sadly, the proportion of Black male physicians has remained unchanged since 1940 at less than 3 percent of all physicians. The percentage is even lower among surgeons.

Simons considers himself “lucky” because he could always see the opportunity before him. His father was a physician and his mother a nurse, so he had built-in mentors for launching a career in medicine. 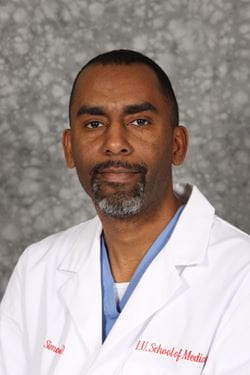 That didn’t mean his path was always smooth.

“As you’re going through those difficult times, it’s hard to look ahead and see the future,” Simons said. “One of the reasons I never gave up is because I had my parents as that role model.”

When he speaks to students, he candidly shares about his academic struggles as an undergrad, admitting he wasn’t focused. Simons didn’t get into medical school on the first try. He enrolled in a postbaccalaureate program to strengthen his skills and improve his GPA before his successful matriculation into medical school at the State University of New York, Brooklyn.

“Not everyone’s path is an easy path,” Simons said. “If it’s something you want to do, even though there are hurdles you have to overcome, you can still be very successful. I try to show them there’s light at the end of the tunnel.”

If it weren’t for Simons’ candor, Moore might have given up on his lifelong dream to become a surgeon.

“That was the first time I heard of anyone who didn’t make straight A’s becoming a doctor,” Moore recalled. “He had to overcome to get to where he is.”

Moore wanted to be a surgeon since he was 8 years old—when he went on a school field trip to a museum and saw brains with tumors on them preserved in a jar. “I thought if you cut those things off, that person would’ve been OK,” he remembered thinking.

He worked hard in school and got a full ride scholarship to IU on the pre-med track. But Moore says he didn’t learn how to study until after graduating with a GPA that was disappointingly too low for medical school. 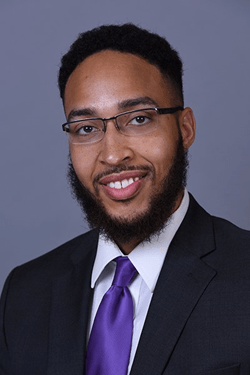 Like Simons, Moore didn’t give up and sought out a post-baccalaureate program to strengthen his skills. For Moore, that was the MSMS program started by Rawls at IU School of Medicine, a program designed for students from backgrounds underrepresented in medicine to enhance their preparation and confidence for future success in medical curriculum. Simons has been involved as a mentor with the MSMS program for nearly 20 years.

“Not until I got to the MSMS program did I learn how to study,” Moore said. “Had I been admitted to medical school right out of college, I would not have been successful.”

He graduated at the top of his MSMS class, earning the George H. Rawls Exemplary MSMS Scholar Award to pay for tuition at IU School of Medicine. Because of this experience, Moore intends to give back and support others’ medical education.

“I wouldn’t be where I am now without Dr. Simons and Dr. Rawls and others,” Moore acknowledged.

Rogers also went through the MSMS program on his way to an MD from IU School of Medicine. That’s where he met Simons.

“Dr. Simons noticed the lost look on my face. He asked who I was and the reason I looked in disarray,” Rogers recalled. “After learning I was studying to get into medical school, he gave me a card with his contact information. His willingness to help someone he didn’t know inspired me to be a person who placed a priority on paying it forward.” 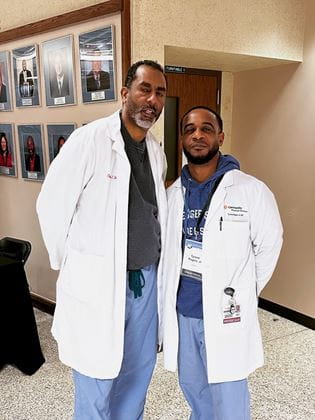 For years, Simons and a colleague have hosted gatherings in their homes for African American male learners—undergraduate, master’s and medical school students, as well as medical residents.

“This was the only support group for Black males in medicine,” Rogers said. “It was a time to freely discuss struggles without judgment and with understanding. Knowing I wasn’t alone with my thoughts and experiences was comforting and encouraging. Many days I wanted to stop, but being part of something bigger than myself helped me to get past those days.”

Today, both Rogers and Moore are Indianapolis surgeons who intentionally reach out to the next generation as Simons did for them, speaking to student groups and offering shadowing opportunities.

“The most important thing I’ve learned from Dr. Simons is the meaning of your life being bigger than you,” Rogers said. “Someone is always watching and observing, and you can help guide them—the next generation—to the best path for them.”

While Moore originally had his sights on becoming a neurosurgeon, he ended up in trauma surgery and now has an office just steps away from Simons at Eskenazi Hospital. At IU School of Medicine, Moore is an assistant professor of surgery, and Simons is an associate professor of clinical surgery.

“People say my personality is similar to his in that we’re laid back and cool in emergency situations,” Moore said. “I think I really developed my trauma style after him. And not just in trauma but life in general. When things are out of your control, keeping your cool and asking, ‘What’s the next step I need to take to get through this?’”

Simons’ mentees say he has taught them life is more than a successful career.

“I remind them that wellness is about being able to take care of yourself and your loved ones and maintaining your sense of purpose, and community service is an important part of what we’re doing, too,” said Simons, a husband and father to four grown children. “When we have our ‘males only’ sessions, we always challenge everyone there: ‘Within this next year, we want you to inspire someone. Bring someone up with you.’” 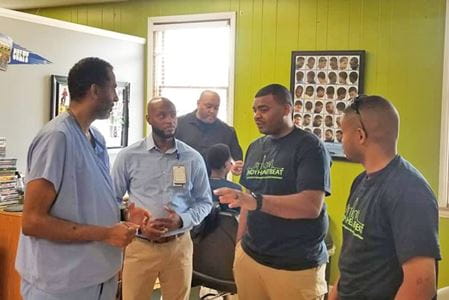 “I was raised in one of the rougher neighborhoods in Indianapolis. Not a lot of people where I’m from are trauma surgeons—a lot of those people are causing traumas,” Moore said. “I reach back to those youth to try to show them there’s a different way than what we grew up knowing.”

For Simons, there’s no greater reward than to see his mentees thriving in their lives and medical careers—and showing the next generation the opportunity before them.

“I think my success is based upon people like Reilin Moore and Tyrone Rogers and other great individuals who have been through this program,” Simons said. “It has been an honor and privilege to work with people like that and see them grow to where they are today.

“I love to see my colleagues out there doing their thing and inspiring. They will probably do more than what I’ve done—and I kind of like that,” adds Simons. “They’re doing great things.”