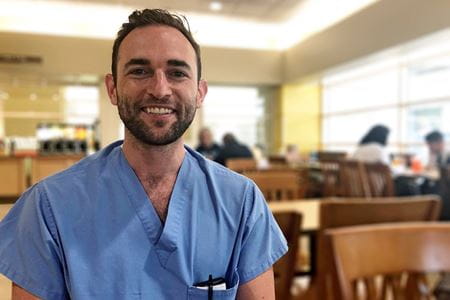 Rob Wessel, MD, comes from a long line of businessmen and women.

His father as well as many of his aunts, uncles and cousins work selling insurance for the same company.

Wessel said he gave it a try for a few summers in high school but couldn’t see it being his career. He liked math and science and hands-on work. And, eventually, medicine revealed itself as his true calling, ticking all of those boxes.

Wessel recently completed his fifth and final year as an Indiana University School of Medicine Department of Orthopaedic Surgery resident, and he’s chosen to continuing studying in Indianapolis for a few extra months, honing the skills he’ll need to be an excellent surgeon.

In August, Wessel started in the one-year orthopaedic trauma fellowship with the Department of Orthopaedic Surgery. He will be working under the guidance of the celebrated traumatologists who serve as department faculty, like Greg Gaski, MD, the director of trauma fellowship program, and Todd O. McKinley, MD, the department’s director of research.

Wessel, like all those who pass through the trauma fellowship, will work primarily out of Indiana University Health Methodist Hospital in Indianapolis, which houses the state’s most experienced Level I Trauma Center. He completed rotations at Methodist during his residency—it’s one of about 14 medical centers and hospitals in Central Indiana where orthopaedic surgery residents work during their education—and he’s eager to now return full time, he said, because of the pathology and experiences the hospital offers.

Wessel has remained in the Midwest for all of his education, having obtained his undergraduate degree from Miami University of Ohio and medical degree from the University of Louisville before coming to IU School of Medicine for residency.

Wessel vividly remembers the moment he knew he wanted to become an orthopaedic surgeon.

He was working in the emergency department in a Louisville hospital, helping tend to a patient with a fracture, and he was allowed to place a skeletal traction pin on his own.

“I thought it was the coolest thing,” he said with a smile, recalling the moment.

It was a surgeon in Louisville who first tipped Wessel off to the IU School of Medicine, recommending the program in Indianapolis. The more Wessel learned about it, the more he wanted to join.

He and his wife, Anne, both matched with IU School of Medicine for residency, and she is now an attending in the psychiatry department at the Richard L. Roudebush Indianapolis VA Medical Center. Knowing IU School of Medicine could offer them each a great education in their chosen subspecialties was a big reason for choosing to relocate to Indiana.

The five years he’s spent studying in the Department of Orthopaedic Surgery have been incredibly enjoyable, Wessel said. He finds himself waking up each morning energized and excited.

“It’s fun to come into work,” he said. “It’s hard not to enjoy yourself while you’re here. It’s a nice, well-nurtured environment, and you feel really comfortable with the people.”

He called his fellowship “a victory lap,” adding that he was glad not to have to say goodbye to all the great people he’s met so far. He’s looking forward to further honing his skills, thanks to the expansive curriculum the program offers, while working beside them.

All orthopaedic surgery trauma fellows are required to complete one research project during their time of study; and, as part of IU School of Medicine’s larger global health initiative, spend two weeks in Eldoret, Kenya or Hangzhou, China serving patients.