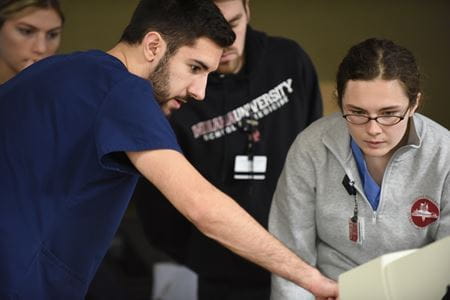 Members of the Ophthalmology Student Interest Group assist a patient at the IU School of Medicine Student Outreach Clinic.

The basement at Neighborhood Fellowship Church in Indianapolis is dark and timeworn. It’s easy to tell that over the years it’s played host to countless church activities: there are cafeteria-style tables folded up and pushed against one wall; there’s a little stage dotted with sound equipment.

Once a month, this place serves as a makeshift eye care center, where underprivileged members of the community can come for examinations—part of the greater Indiana University School of Medicine Student Outreach Clinic. At this weekend clinic, IU School of Medicine learners practice their crafts, gaining unmatched medical experiences while helping those in need.

In the church’s basement, prospective ophthalmologists—medical students and residents who are members of the Ophthalmology Student Interest Group—walk men and women through eye exams, testing their visual acuity and peripheral field and using computerized ophthalmoscopes to look into each person’s retina.

Sometimes the patient walks away with a free pair of reading glasses or an updated prescription. Other times, they receive a sight-saving diagnosis and information to follow up with an ophthalmologist at a nearby hospital.

This was the case one gray and rainy Saturday in November.

As a patient pressed their forehead against a sleek but intimidating piece of equipment known as a fundus camera, young people in scrubs crowded around to see the image generated by the machine.

It was clear, said a resident, who would deliver the official diagnosis: glaucoma.

The scan had shown damage to the optic nerve that, if left untreated, could cause irreversible vision loss and, eventually, blindness.

It’s interesting to think that, without a clinic like this—an unassuming, unintimidating place in the basement of a church—many of these people would go without much-needed medical care, like vision screenings, said Hanna Tso, a third-year medical student and president of the Ophthalmology Student Interest Group.

This patient, for example, would have slowly lost their sight, she said. They’d experience few symptoms without any pain while their vision ebbed away, with peripheral vision fading first and gradually moving toward the center gaze.

But with the right intervention, that sight can be saved, Tso said. Knowing that is an incredible feeling.

The IU Student Outreach Clinic in Indianapolis began in 2009 and strives to bridge the health care gap in the community. The work done there is completely student led and encompasses the university’s schools of medicine, dentistry, nursing, occupational and physical therapy as well as social work and law. Students studying Spanish serve the essential role of translators for Spanish-speaking patients.

Ophthalmology added its services to the clinic’s offerings in 2013, and learners have helped more than 700 patients since then. Members of the Ophthalmology Student Interest Group operate the eye care center in the clinic’s basement on one Saturday a month with at least one attending physician, a resident and five to 10 medical students.

The important work the group provides earned them special recognition from IUPUI in 2019. The group received awards for outstanding community service and outreach from the campus’s CUBE Student Organization Team.

Each patient that visits is given a classic visual acuity test, in which they’re asked to read the letters of a Snellen Chart while standing 20 feet away from it. Then—using donated or grant-acquired diagnostic equipment—the patient’s retina and optic nerve are examined.

Students teach and learn from each other as these exams take place, Tso said. Residents and attendings supervise and make any official diagnosis, but the medical students who participate gain patient-interaction experience they usually don’t get until later in their studies, she said.

Members of the Ophthalmology Student Interest Group care so much for the patients they see at the clinic that they were inspired to create three new officer positions within their organization called patient navigators.

These members follow up with the patients who receive an urgent diagnosis during a clinic visit to ensure they’ve followed through with their hospital referral and made an appointment with an ophthalmologist.

Tso started volunteering in the clinic during her first year of medical school. During her first two years she was studying on the West Lafayette campus, but would drive to Indianapolis on Saturdays to assist at the clinic alongside others interested in ophthalmology.

Helping in the clinic gave her an advantage both in the classroom and now as a third-year medical student completing her ophthalmology rotation and more regularly interacting with patients in hospitals. She didn’t start with a blank slate like others did, she said.

But volunteering in the clinic is worth more than just experience, Tso said.

“If I can help people off the street get the help they need, that’s huge,” she said.