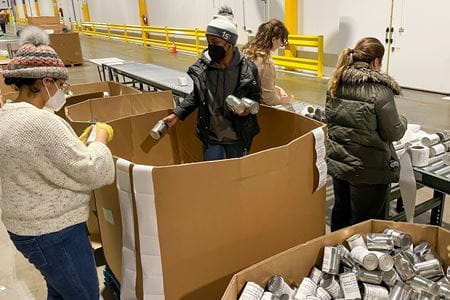 One silver cylinder at a time, they sorted through crates and crates of canned vegetables.

These particular cans were dented or dinged, making them less attractive to customers at supermarkets and grocery stores (or so their manufacturers believed). But with their contents unaffected by the damage, they’d been purchased or donated to Gleaners Food Bank of Indiana and were now headed to hungry Hoosiers.

About a dozen members of the Department of Orthopaedic Surgery’s basic science faculty and staff spent a day volunteering at Gleaners Food Bank recently, helping sort through the cans and prepare them for distribution to those in need.

Each year at Christmastime, the department’s scientists find a way to give back to the community through volunteer work or donation drives.

This December, they stepped away from their laboratories for a day, trading in their complex, musculoskeletal research for simple sorting. They chatted while they worked, enjoying each other’s company, and getting to know their fellow volunteers. Some hoped to return to volunteer again.

Gleaners purchases bulk amounts of imperfect canned goods directly from manufacturers and suppliers. Volunteers are then enlisted to sort and label these canned goods. They are then given to families or to Gleaners partners, such as emergency food pantries, soup kitchens and shelters.

The department’s annual charity efforts are spearheaded by the staff in the Kacena Lab but supported enthusiastically by the other PIs and their teams.

For example, in 2020 – recognizing that the COVID-19 pandemic had stretched and stressed the community in many ways – the lab organized socially-distanced donation drives for the IUPUI Paws Pantry, Indy Humane and the Julian Center. Boxes for each organization were placed outside labs and offices so donations could be safely collected.

This year, they opted for a physical means of giving back, and chose Gleaners as their beneficiary.

As the state’s largest food pantry, Gleaners distributes more than 99 million pounds of food in more than 20 Indiana counties each year. And volunteers make up a huge portion of the Gleaners workforce, logging more than 39,000 hours of work in 2021, the food bank’s website states.