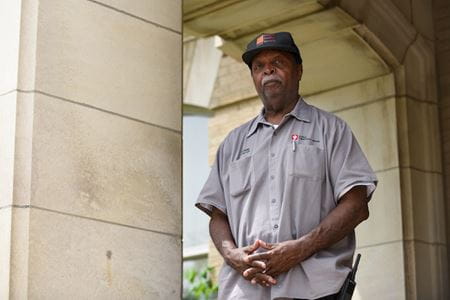 Bennie Porter has worked at Long Hall for 51 years.

He grew up just a few blocks away and has been a fixture at the facility for 51 years—starting in security in 1971. His childhood home on the former Hiawatha Street was acquired to accommodate the university’s expanding medical center in the 1960s.

“All this wasn’t even built back then,” said Porter, standing beneath one of the grand archways of the historic Long Hospital building while surveying the newer buildings now lining a bustling Michigan Street, including the IU Health Simon Cancer Center, the IUPUI Campus Center and Vermont Street Parking Garage.

When Porter was a boy, Long Hospital was among just a handful of buildings on the medical center campus. It was where his mother worked, in the linen room cleaning uniforms, and the place he would often stop on his way home from St. Bridget Catholic School, formerly located at 801 Dr. Martin Luther King Jr. Street—before its demolition in 2000. 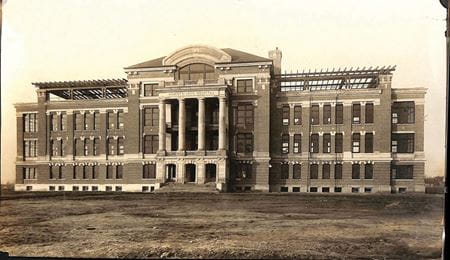 “I noticed it had two restrooms—one ‘white’ and one ‘colored,’” he recalled. When the hospital opened in 1914 with the latest technology, Black patients were refused treatment, and Black medical and nursing students were not allowed to train there.

Porter was born on September 20, 1943, at City Hospital—later known as Indianapolis General Hospital, then Wishard Memorial and now Sidney & Lois Eskenazi Hospital. Located at 10th Street and Indiana Avenue, it was the first Indianapolis hospital to welcome Black patients and hire Black staff in the 1930s.

The area has long been a hub for health care in downtown Indianapolis. The William H. Coleman Hospital for Women and James Whitcomb Riley Hospital for Children were located on the same city block as Long Hospital. Porter remembers the 1950s being the height of the polio epidemic. Most pediatric patients were treated at Riley, but several “iron lung” ventilator machines later ended up in the Long Hospital basement. 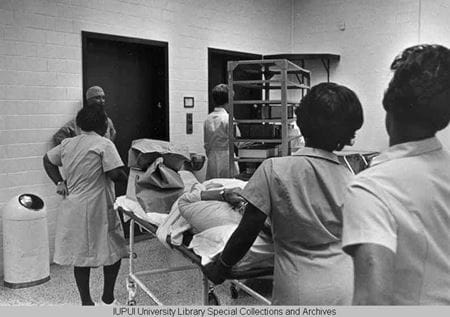 When Porter’s mother worked at Long, there was a burn unit on the sixth floor; the fifth floor handled surgery. Patients who were inmates were placed in a “prison ward” on the fourth floor; a psychiatric ward had bars on the windows. Porter recalled an event of local lore when “two prisoners tried to escape with bed sheets tied together, and one broke his legs.”

When Porter started working for IUPUI Campus Facility Services in 1971, Long Hospital’s operations had just moved to the newly built University Hospital. It was a time of transition for the historic building—once considered for demolition—as it received renovations and began to welcome IU School of Medicine faculty, staff and students.

Porter also worked at the Indianapolis Wonder Bread factory on a line making Hostess Ding Dongs and crumb cake. His starting wage was $2.39 per hour. In 2000, after 35 years in that job, Porter retired in grand style, showing up in a limo and wearing a snazzy suit. Porter said he doesn’t need another retirement party and has no plans to stop working at Long Hall. 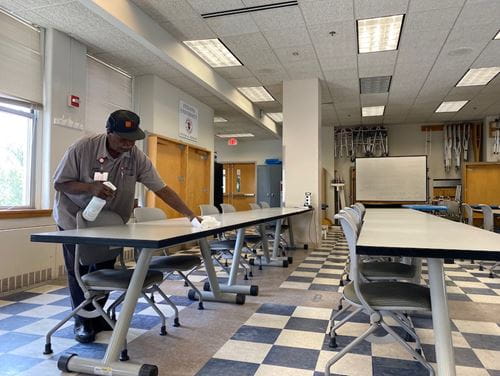 His supervisor, Don Anderson, said Porter is cheerful and reliable—a person who doesn’t complain and is eager to assist coworkers.

An eyewitness to institutional evolution

Today, Long Hall houses several IU School of Medicine offices and learning spaces. Medical Student Education is on the fourth floor where the former prison ward was located, the Office of Gift Development is on the fifth floor, and the Department of Family Medicine occupies the second floor, where the stately steps to the former entrance of Long Hospital lead. 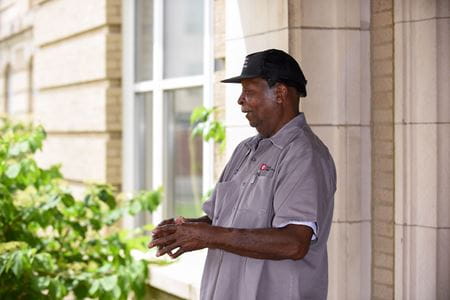 As Porter walks down the main hallway, gazing upon a row of portraits, he recognizes each face and remembers the personalities of every Department of Family Medicine leader, starting with founding Chairman A. Alan Fischer, MD, who arrived in 1974.

“Dr. Fischer had a band, and they would come and rehearse here in the evening,” Porter recalled.

Back in the 1970s, Porter had to clean a lot of ashtrays. Smoking was still common in hospital rooms, break rooms and even physician offices. He recalls inquiring about one doctor whom he hadn’t seen for a while and was shocked to learn the doctor had surgery to remove part of his tongue due to oral cancer.

“When they told me that, that scared me straight. I ain’t smoked a cigar or cigarette since,” Porter said.

When Bradley Allen, MD, PhD, moved into his Long Hall office in 2015, he quickly noticed Porter going out of his way to greet and assist people in the building.

“He is quick with a smile and engages in conversations in a way that confirms his interest in helping address any questions coming his way,” said Allen, senior associate dean for Medical Student Education. “He obviously takes great pride in his work—providing a great working environment for us all—as well as helping our university extend a welcoming setting for employees and visitors alike.”

The rise of a campus & demise of a Black cultural center

Porter has always enjoyed his work with IUPUI Campus Facility Services—so much so that he has referred several friends and family members over the years. Anderson said Porter’s recruits have been longtime employees averaging 12 or more years; Porter’s daughter, Angela, has worked in custodial services at Eskenazi Hospital for 15 years. 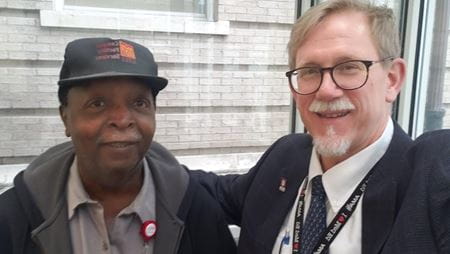 “Bennie’s tenure at IU School of Medicine is a tribute to his personal investment in the success of the school—promoting health and serving the very community that he has called home and watched grow over the years—even though that growth often came at the expense of displacing the neighborhood he knew as a child,” noted Allen, acknowledging the painful historical intersection of institutional advancement and systemic racism.

Growing up in a neighborhood next to the university medical campus was full of happy memories for Porter. His Hiawatha Street home had outdoor toilets—not uncommon in that day—but his family was cutting edge when it came to technology. He calls his mother a “go-getter” who determined to learn to drive and then bought herself a Ford Fairlane during a time when most people took buses or cabs to get around town. When she decided the family should be the first in the neighborhood to get a television, friends crowded into their living room to watch “The Ed Sullivan Show” and “Hop Along Cassidy” on the 17-inch, black-and-white screen.

As the American Basketball League (ABA) took off in the late 1960s, Porter recalls the excitement of watching greats like Roger Brown and Freddie Lewis play for the Indiana Pacers. Coach Bobby “Slick” Leonard led the Pacers to three ABA championships before the ABA-NBA merger in 1976. Porter and his friends also liked to gather at Military Park and enjoyed the rides at Riverside Amusement Park—but only on designated days when African Americans were allowed. Nearby Indiana Avenue offered shopping and dining. The Avenue was the place to be for Black life and culture—at least until its demise in the 1960s and ’70s.

In its heyday, The Avenue was where jazz legends like Wes Montgomery and Jimmy Coe joined hundreds of local musicians, playing in more than 30 nightclubs. It was also a regional center of Black-owned businesses often called “Black Wall Street” and home to numerous cafes, Black churches, Black newspapers and the famed Madam C.J. Walker Theatre and beauty business empire. Historians agree the state’s use of eminent domain for a new interstate, downtown “redevelopment” and expansion of the IUPUI medical center played a significant role in gutting this once thriving Black community. Much of the Indiana Avenue real estate is now parking lots.

Porter recalls some local protests and outcries, but he chooses not to be bitter. Instead, he talks about the value of having a robust medical center and university at the center of the community. Access to top-notch health care has increased as IU School of Medicine has opened numerous centers specializing in research and treatment for diseases like diabetes, Alzheimer’s and cancer. Many faculty members are doing research into health disparities affecting outcomes for Black and historically marginalized patient populations. 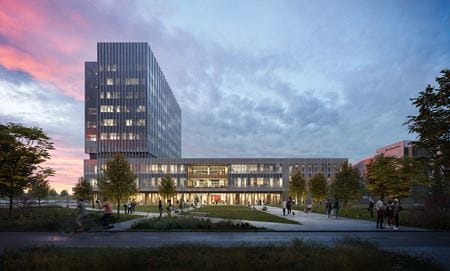 IU School of Medicine and Indiana University Health currently have plans to build a new hospital and academic health center—the largest building project in the medical school’s 120-year history. Groundbreaking on the new flagship building is planned for this fall, with completion expected in November 2024. The 11-story academic health center is designed in a striking “L” shape with a three-story base to house medical education and learning communities; the eight-story tower will expand space for cutting-edge research collaborations.

Porter marvels at the continual improvements on the sprawling campus, in the neighborhood he has always known as home.

“Can you imagine another 10 years what it will be?” he muses. “It just keeps growing. I know it will continue to go on after I’m long gone.”

In recent years, IUPUI has acknowledged how the expansion of its campus adversely impacted the neighboring Black community and has begun to make reparations. In 2020, IUPUI established the Center for Africana Studies and Culture, housed in the Madam Walker Legacy Center on Indiana Avenue, and created the Through Their Eyes scholarship program for students who are descended from displaced people who once called the Ransom Place and Indiana Avenue neighborhoods home.

Learn more about diversity, equity, inclusion and justice initiatives at IUPUI and IU School of Medicine.