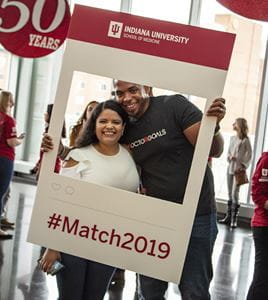 With a red envelope in his hand and a big grin on his face, Shane Dorsey greeted friends and family members with hugs and high-fives.

Pride and excitement poured from him. Finally, after years of hard work, he’d done it.

And while he’s eager to face his future, Dorsey took a moment following the Match Day festivities on Friday, March 15 to reflect on the diligence and grit that got him to where he is today.

Dorsey wasn’t immediately accepted to medical school when he first applied. But instead of giving up, he enrolled in the Master of Science in Medical Science (MSMS) Program at IU School of Medicine. The two-year program is designed to help prospective medical students better prepare for the future through skill-building experiences and didactic instruction.

In the time it took him to earn that master’s degree, Dorsey improved his GPA and his score on the Medical College Admission Test. And on his second attempt applying to IU School of Medicine, he was successful—and earned a scholarship along the way.

Dorsey said those who find themselves in the same place he once did should never back down, no matter how difficult it might seem.

“You just have to keep going,” he said. “Be persistent until you get what you want.”

What is your reaction to your match? How do you feel?

Dorsey said he was pleased to learn he’d be continuing his training in New Orleans. He was hoping the matching program would put him in the southern United States, in an area where he could help care for underserved members of the population. Tulane University fits both those needs.

What led you to choose this specialty?

Dorsey has always been fascinated with the brain and trying to understand how it works. He originally entered medical school thinking neurology might be his calling.

But during his years of study, he explored other interests, particularly in emergency medicine.

He spent a lot of time in hospital emergency departments, did a rotation in trauma surgery and talked with residents in IU School of Medicine Department of Emergency Medicine to learn what would be expected of him. He started to think emergency medicine would be his specialty.

Then, in his third year of medical school, Dorsey reconnected with neurology and his interest for the specialty reignited. He’d come home from his rotation in the Department of Neurology excited and inspired, and it quickly became clear to him that neurology held his passion.

What are you most looking forward to?

Simply put: the location, Dorsey said. Tulane University has a great neurology program and is in a great city, he said. He enjoyed meeting the residents and staff there during the interview process, and he’s eager to now be part of it all.

What aspects of your education best prepared you for what lies ahead? Was there a specific faculty member who really helped you?

The great instruction Dorsey received while studying in the Department of Neurology helped put him on the path of success, he said. Department chair Robert M. Pascuzzi, MD, and professor John C. Kincaid, MD, become important mentors over the years, and Dorsey said he’s grateful for their guidance.

Check back for more stories from IU School of Medicine’s Match Day 2019.