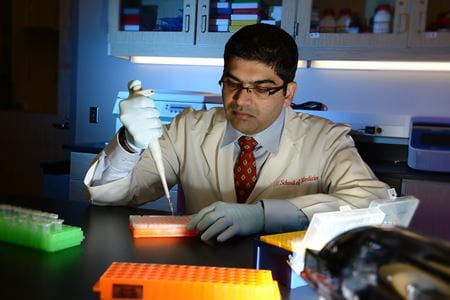 Pharmacists could play a key role in protecting patients with diabetes from a serious degenerative eye disease.

A study conducted by Indiana University School of Medicine researchers found proof-of-concept that pharmacists’ help in management of diabetes can reduce a patient’s risk of developing diabetic retinopathy.

Primary-care physicians typically treat diabetes; but researchers at IU, led by Ashay Bhatwadekar, PhD, assistant professor of ophthalmology at IU School of Medicine and professor of pharmacology and toxicology and Zachary Weber PharmD, BCPS, BCACP, CDE at Purdue College Pharmacy, considered the difficulties these doctors face, and now said they believe pharmacists can fill in any gaps.

Their findings were published recently in Pharmacy Practice.

According to researchers, long periods between patient visits and limited meeting time with patients during those visits can hinder the educational, clinical, medication-related and psychological care of these patients with diabetes need.

But a pharmacist’s involvement in medication management, patient education and drug utilization review has proven helpful in treating other ailments.

The same can be said for retinopathy. Bhatwadekar said he believes the review done by IU—looking into the benefit of pharmacist-managed care in retinopathy progression—is the first of its kind. Researchers performed a retrospective data analysis of patients with diabetes seen at the pharmacist-managed cardiovascular risk reduction services to assess the potential benefit of pharmacist intervention on retinopathy outcome, Bhatwadekar said.