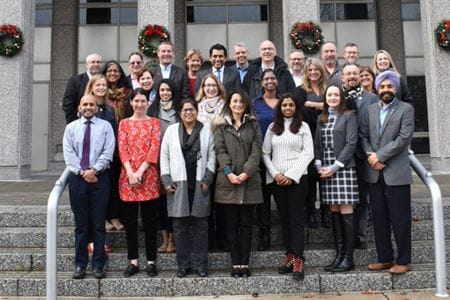 Kumar and other members of the U.S. Cochrane Network.

In her spare time, medical student Nimisha Kumar enjoys different hobbies like weaving, sewing and painting. Working with her hands has always been something she enjoys, but it took her a few years of medical school at Indiana University School of Medicine to realize that’s also what she wanted to do as a doctor.

“It wasn’t until I started my third year and did more with surgery that I realized how much I liked working with my hands for a career, as well,” Kumar said.

Kumar was born in India, but grew up in central Indiana. When visiting family in India as a child, her uncle helped cultivate her interest in medicine.

“I was about eight or nine and my uncle had just opened a clinic,” Kumar said. “He was the only surgeon in his entire town. I remember him talking about how he was able to bring care to a bunch of people who didn’t have to travel as far to a big city anymore. That just stuck with me as I went through school.” 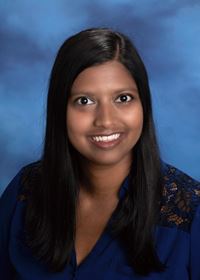 After finishing her undergraduate degree at IU Bloomington, Kumar started medical school at IU, where she was accepted into the MedSTAR program. The program allows medical students to take time off school to pursue research. Because she had an interest in obstetrics and gynecology, she connected with David Haas, MD, MS vice chair of research for IU School of Medicine Department of OB-GYN and was named the inaugural research fellow for the U.S. Satellite of the Cochrane Collaboration Pregnancy and Childbirth Group. The group produces reviews of health care interventions and research.

“Nimisha was instrumental in establishing and furthering the activities of the Cochrane U.S. Satellite. She took the lead on our large endeavor to prioritize a large list of reviews needing to be updated,” Haas said. “She learned new software, developed and deployed surveys, analyzed and published the results, and worked with multiple groups to actually help these reviews get started. She organized the first training workshop here at IU School of Medicine on Cochrane methodology and was purposeful and successful in getting more consumer involvement in the process.”

Kumar also presented abstracts of her work at conferences and worked with other Cochrane members from all over the world. She even won the People’s Choice OB Award at the Central Association of Obstetricians and Gynecologists (CAOG) Annual Meeting.

“I think it’s really unique for me to be part of Cochrane, because usually it’s something people get into later on in their career,” Kumar said. “I think people really valued that I was a younger member of the medical field and liked my insight. It was also great for me to have a lot of people who were more experienced and knew the ins and outs of research and systematic reviews who I could learn from.”

Now in her fourth year of medical school, Kumar is applying for residency programs in OB-GYN, choosing the specialty because it combines several of her interests.

Kumar is still finishing up a couple of projects with the Cochrane group, but hopes she can still be involved with the group and Haas’s work long term.

“I’d still love to be involved with Cochrane in the future,” Kumar said. “It was really great to get this experience and mentorship.”

Learn more about the Cochrane Pregnancy and Childbirth Satellite Center at IU School of Medicine.