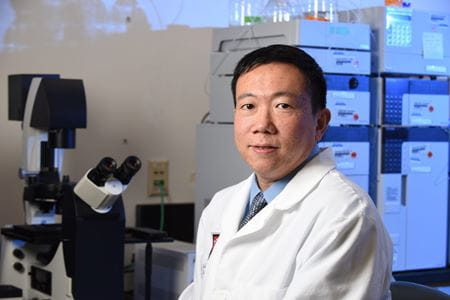 More than half of Americans ages 18 and older drink alcohol regularly, according to the Centers for Disease Control. And while for any single person there are a variety of factors—genetics and the environment among them—that can turn social drinking into something more dangerous, alcohol remains the nation’s third leading cause of preventable death, claiming an estimated 88,000 lives each year.

Excessive alcohol consumption takes a particular toll on the liver, with effects ranging from fatty deposits that may cause little to no symptoms to cirrhosis and severe liver failure that require organ transplant or lead to death. Researchers at Indiana University School of Medicine are studying one of the more serious and deadly forms of liver disease associated with heavy drinking—liver dysfunction and failure referred to as alcoholic hepatitis.

“Any person who drinks enough over a period of time will get a fatty liver from such drinking, but at this stage it is 90 to 95 percent reversible within 12 weeks if the person stops drinking,” said Naga P. Chalasani, MD, IU School of Medicine associate dean for clinical research and division chief of gastroenterology and hepatology. “If drinking continues, a small percentage of people will get this very florid alcoholic hepatitis with high mortality; 30 percent of people die within three months—many of whom, more recently, are individuals younger than 35.”

With excessive and binge drinking on the rise among younger populations, studies show that over the past two decades mortality from cirrhosis caused by alcoholic liver disease has increased in people ages 25 to 34 by nearly 80 percent—the highest average increase of any age group. In the overall population, deaths caused by cirrhosis are expected to triple by 2030. In addition, from 2001-13, there was an 80-percent increase in high-risk drinking and alcohol-use disorder among women. This is of particular concern since women are far more susceptible than men to the harmful effects of heavy drinking.

“Such staggering predictions are quite troubling, and we believe not yet fully appreciated by the broader community of scientific and public health experts,” Chalasani added.

Related to alcoholic hepatitis, research conducted by Chalasani and his team, funded for the past eight years by the National Institute on Alcohol Abuse and Alcoholism (NIAAA), investigates possible risk factors to understand why some people develop the disease and others don’t. The team is involved in clinical trials and translational studies to develop novel treatment. While steroids alleviate symptoms in some patients, there hasn’t been an effective treatment for alcoholic hepatitis in the past 50 years.

Naga Chalasani, MD, sits in front of a FibroScan machine in his lab at Indiana University Health Hospital.

“We’re looking into why some people are more susceptible, and others are protected,” Chalasani said. “Female gender, obesity and certain genetic mutations have been identified as potential risk factors for developing severe liver damage from heavy drinking.”

Chalasani’s colleague, Suthat Liangpunsakul, MD, professor of medicine and a noted physician scientist in the field, leads a study to explore how coffee drinking may protect heavy drinkers from alcoholic hepatitis—especially individuals carrying a common genetic mutation. The team has recently been awarded four new grants by the NIAAA to continue their research for another five years.

Analyzing the role of genetics in alcoholism has been a long-term research focus at IU School of Medicine. The Indiana Alcohol Research Center, established at the school in 1987 through an NIAAA grant, has been continuously funded by the institute for the past 31 years. The center got its start with the work of IU Distinguished Professor Ting-Kai (T.-K.) Li, MD, (1934-2018), associate dean for research, (and subsequently director of the NIAAA), who brought together a thriving group of researchers dedicated to understanding the biological bases of alcoholism. The first to breed selected lines of rodents with varying preferences for alcohol, Li and his colleagues created a genetic model of alcoholism that can be studied across generations, laying the foundation for groundbreaking research into genetic ties to the disease.

“The single biggest ‘genetic’ risk factor for developing alcoholism is a family history of alcoholism,” said David A. Kareken, PhD, Indiana Alcohol Research Center director and professor of neurology at IU School of Medicine. “While we don’t know of any single gene that’s primarily responsible—likely it’s interactions of large groups of genes—the most effective way of studying this is through family histories.”

With a nucleus of expertise that includes researchers from IU School of Medicine, the IUPUI School of Science and the Purdue University College of Engineering in West Lafayette, center investigators (led by emeritus member Sean J. O’Connor, MD) have also developed a novel method to administer alcohol intravenously to people for research purposes. Allowing for the careful control of alcohol exposure, the technology, when paired with imaging, enables researchers to study the effects of alcohol on the brain. The intravenous technology is being used by researchers across the country to create varying models of alcohol consumption to study human drinking behavior and related impact.

Coinciding with the renewal last year of its most recent NIAAA five-year grant, the center is focused on the study of “aversion resistant drinking,” defined as a more automatic pattern of drinking that becomes insensitive to adverse consequences, such as career setbacks or job loss, and broken relationships.

“As drinking progresses, it becomes less under the guided control of the executive part of the brain and more insensitive to circumstances that would normally stop it,” said Kareken. “It’s at this point we believe that there is a fundamental change in the brain, which shifts to a state that has more to do with habitual behaviors and is less under that deliberate control.”

“While alcohol has been part of human existence and its cultural traditions for over 6,000 years, there’s still much to learn about its physical and psychological effects, especially as they relate to finding new treatments and working to prevent alcohol-related deaths,” Kareken said.