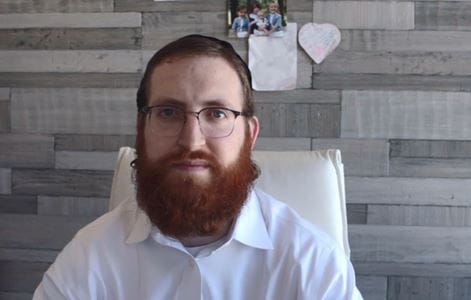 Mordy Getz wanted to be alone for the recording session.

So the New York real estate developer went to his empty office. He spent hours looking into a camera lens. He wanted his children to see his face, to hear his voice. Be strong, he told them.

Getz assumed the cancer would leave his five children—all younger than 8 years old—without their father. Death wasn’t what he feared.

“It’s guilt,” he said. “You feel guilty because you have children who will grow up without their father. That was my biggest fear.”

At the encouragement of a physician in New York, Getz boarded a flight to Indianapolis for an appointment with Larry Einhorn, MD, the Indiana University School of Medicine oncologist who discovered the cure for testicular cancer.

Sitting with Einhorn during their first visit in April 2016, Getz’s anxiety melted. Not only was Einhorn knowledgeable, but he was soothing—a grandfather telling you all would be well. “There’s just a tenderness,” Getz said. “It’s something amazing.”

Before he flew back to New York, where he would undergo a treatment plan designed by Einhorn, the doctor made a promise. “In three months, you’re going to be clean,” Einhorn told him. “It’s not just 99 percent. It’s 100 percent.”

Sure enough, three months later—on June 16, 2016—an e-mail heralded good news. He was cancer free. And Getz has stayed that way for the past 18 months.

Grateful for the care he received, Getz now generously gives to IU School of Medicine to support Einhorn’s research. Einhorn continues to push to find new treatments for cancer and to reduce the side effects of the chemotherapy that saves patients’ lives. Research has shown lingering side effects like tinnitus, vision loss and heart disease can reduce the quality of survivors’ lives. His goal is to help patients avoid those issues.

And what has Getz done with those videos?

Are you grateful for the care of an IU faculty physician, want to support cutting-edge research, or hope to contribute to training the next generation of expert healers? Make a gift today to the area of IU School of Medicine that is most meaningful to you.