50 years of collaboration: IU and Purdue team up to train new physicians in West Lafayette 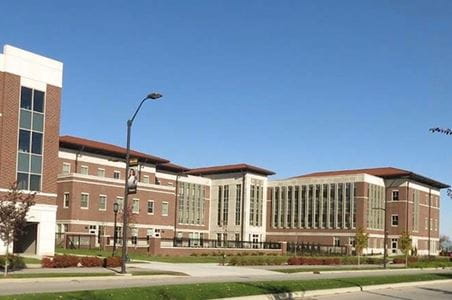 Indiana University and Purdue University are often pitted as rivals, but the two institutions boast a solid history of collaboration in research and education—particularly in medicine. The relationship has produced hundreds of new physicians over the last 50-plus years—despite its rocky start.

Rumor has it, around the turn of the 20th century, IU and Purdue officials were so opposed over a fight for ownership of a state medical school—among other controversies—that athletic games between the two universities were canceled for two years from 1906-1908. Fast forward 117 years, and IU School of Medicine-West Lafayette is located on the Purdue campus, sharing faculty and collaborating on dual degree programs combining the strengths of IU’s medical school with the Purdue Weldon School of Biomedical Engineering to train the next generation of leaders in the medical device, biotechnology and pharmaceutical fields.

“Purdue University has been a great partner and host campus,” said Matthew Tews, DO, MS, associate dean and director of IU School of Medicine-West Lafayette. “Between Purdue and IU School of Medicine, there’s a lot of great synergy and existing collaborations, so we are excited to continue building on that longstanding relationship.”


Humble beginnings: ‘We started in the sub-basement’

Despite their early differences, Purdue and IU have been partners in medical education since the 1960s. Back in 1908, IU was granted the right to unite all of the state’s small medical schools and form the Indiana University School of Medicine, with foundational science instruction taking place in Bloomington followed by clinical training at hospitals in Indianapolis. But in 1968, the Purdue campus was selected as one of two sites—along with Notre Dame—where a pilot program would be launched to expand medical education throughout the state. 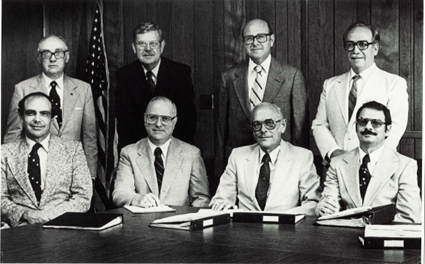 Lindley H. Wagner, MD, was appointed as the first director of the Lafayette Center for Medical Education and served in that capacity for 25 years, leading the fledgling center’s expansion.

It began with just three medical students and meager facilities.

“We started in the sub-basement of the College of Veterinary Medicine at Lynn Hall—not the basement, but the sub-basement where there was originally pea gravel flooring and exposed pipes overhead,” said Jayne Rayman, outreach and communication specialist for IU School of Medicine-West Lafayette. “We had two large classrooms, and I’m told the county morgue was also there in a space next to the classrooms.”

Following the success of the pilot programs at Purdue and Notre Dame, the statewide system of medical education was made official by an act of the state legislature in 1971. Steven C. Beering, dean of IU School of Medicine from 1974-1983 and Purdue University president from 1983-2000, is credited with successfully implementing the vision for a statewide medical education system during those early years.

Patrick O’Neil, MD, was a member of the first class at IU School of Medicine-West Lafayette—one of a dozen incoming students who began their medical school career on the regional campus in 1971.

Not only does he recall the pea gravel floors with plywood walkways, but one of the veterinary medicine professors used the basement to house dogs for research. 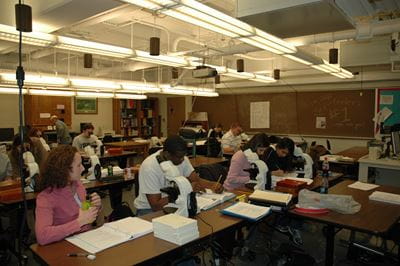 “It was kind of dark, and the dogs were there, but we had our classroom and it was just fine. We were in medical school—that’s what was important,” O’Neil said.

Lynn Hall would receive a few upgrades, but for the next 40 years, medical students in West Lafayette remained in the basement. That didn’t change until 2014 with the opening of Lyles-Porter Hall, a 60,000-square-foot health sciences facility anchored by IU School of Medicine and Purdue’s Department of Speech, Language and Hearing Sciences.

Now 24 new medical students begin their education at IU School of Medicine-West Lafayette each year, and they are able to stay on the regional campus for all four years of their medical school coursework and clerkships, if they wish. O’Neil, a practicing anesthesiologist, helps train those students as an adjunct clinical assistant professor and co-leader of anesthesia clerkships at Lafayette’s Franciscan Health.


Growing a medical school: ‘My dream is now real’

Opening the new facility at Lyles-Porter Hall is something former IU School of Medicine-West Lafayette Director Gordon Coppoc, PhD, DVM, considers one of his greatest accomplishments. From the moment he assumed leadership in 1998, following Wagner’s retirement, Coppoc had been lobbying Purdue and IU leaders for a new building, but it didn’t happen until he invited two Indiana state senators—Brandt Hershman and Luke Kenley—to tour the medical school facilities in West Lafayette, along with members of the Senate Finance Committee.

He recalls one committee member skeptically looking around the basement and saying, “You’re pulling our leg—this is not your medical school facility.” 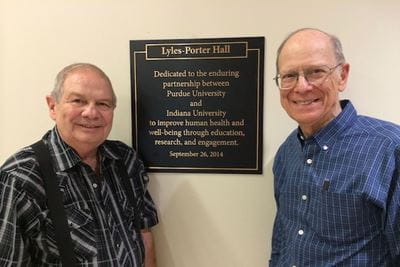 A week later, Coppoc had his authorization for $12 million to upgrade the medical school facilities—but he would have to raise half. To get things going, he and his wife, Harriet, made a significant personal contribution. Serendipitously, Purdue’s speech and audiology program received a $10 million donation around the same time for a new building. Support from the local community, including gifts totaling $16 million, and the efforts of a dedicated Community Advisory Council were also instrumental in this effort.

When the medical school moved to its new facility in July 2014, it marked the first time in Coppoc’s 43-year career at Purdue University and IU School of Medicine-West Lafayette that he had a window in his office. He enjoyed the above-ground view for five months before his retirement at age 75.

At the open house for Lyles-Porter Hall—where Coppoc publicly announced his retirement—he shared that for many years he had worn two pins on his lapel—one that said “Make Dreams Real” and the other displaying the IU and Purdue logos with the words “Working together for all of us.”

“Well, my dream is now real because both IU and Purdue have worked together to make Lyles-Porter Hall a reality,” he said. 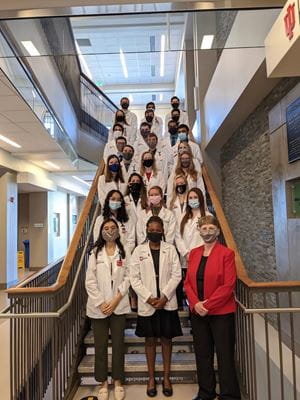 The new facility is a physical manifestation of the long and productive history of collaboration between IU and Purdue scientists, IU School of Medicine Dean Jay Hess, MD, PhD, MHSA said at its opening. The building includes a simulation lab and shared clinical, teaching and research spaces, benefitting both universities’ educational goals while providing improved access to clinical services for the greater Lafayette community.

The facility also brought faculty offices under one roof.

“Coalescing as a faculty was really important,” said Regina Kreisle, MD, PhD, who was the associate dean and director for IU School of Medicine-West Lafayette before Tews, from 2014-2021. “When I started teaching (in 1989), my office was two buildings away in the Department of Comparative Pathobiology. For the first time, there’s a collection of faculty offices in one place. Students know they can always find somebody there.”

Looking to the future: ‘See what we can do in the next 50 years’

In the early days, Wagner brought in itinerant lecturers from various Purdue departments to teach the first year of basic sciences. Coppoc grew the medical school’s faculty and oversaw the medical education program’s evolution to a full, four-year curriculum. Kreisle’s role was to smoothly transition the medical school through curriculum standardization, clerkship expansion and implementation of a new residency program in family medicine. 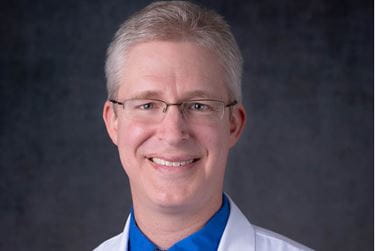 In the summer of 2021, Kreisle handed off leadership to Tews, who is the first practicing physician since Wagner to lead the regional campus.

“He brings experience in simulation and, as a practicing emergency physician, has increased interaction with physicians in the community,” Kreisle said.

Today’s IU School of Medicine-West Lafayette students benefit from small class sizes in a modern facility with opportunities for collaborative, interdisciplinary experiences, along with access to resources on the Purdue campus for wellness, recreation and special interests.

“In addition to the advantages of small classes and dedicated faculty, students in the IU School of Medicine at Purdue can enrich their studies and training by becoming involved in our research enterprise,” said Purdue Provost Jay Akridge, PhD. “Purdue hosts over 130 research centers and institutes—including large-scale interdisciplinary research centers and programs in drug discovery, cancer research and biomedical engineering—in Discovery Park and across our campus.”

Medical students in West Lafayette also have the opportunity to add a scholarly concentration to their MD degree in either the Care of Hispanic/Latino Patients or Biomedical Engineering and Applied Medical Technology. A new MD/MS combined degree program is in the works to train physician-engineers, drawing upon the expertise of faculty from the Purdue Weldon School of Biomedical Engineering.

In the future, Tews plans to explore even more opportunities for collaboration with Purdue health sciences programs while simultaneously building relationships with clinical partners in the community.

“I’m a very collaborative person,” he said. “We have a great group of faculty on campus and in the community, and their engagement makes those collaborations happen. Our students are capable, intelligent and hard-working and we want them to be a part of these collaborations. I welcome the opportunity to work with Purdue and our health systems in the community to see what we can do to prepare us for the next 50 years of educating the these new generations of physicians.” 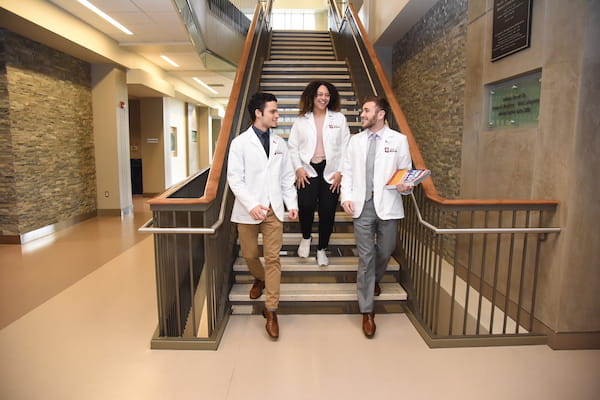 IU School of Medicine-West Lafayette stands out for its partnership with Purdue University, a draw for medical students who want to add studies in biomedical engineering, engage in interdisciplinary research or study the care of Hispanic/Latino patients.