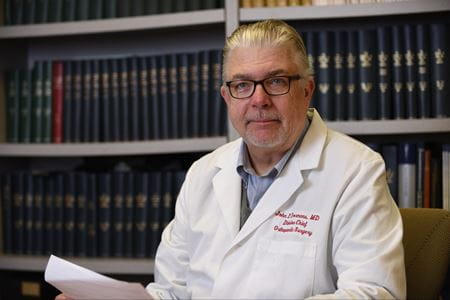 Away from the hospital duties, helping patients and meeting with his fellow physicians, John Dormans, MD, enjoys sailing.

It’s a pastime he picked up while living and working on the east coast, where he owned a home on the eastern shore of the Chesapeake Bay, he said; though he grew up in Indiana, his career as a pediatric orthopaedic surgeon has always put him not far from the waterfront.

And he’s learned a few things being a sailor, he said.

It’s not an easy skill to master; it takes practice. Don’t over steer and don’t make a wrong turn; those mistakes will put the boat off course.

But know where you want to go. Guide the vessel carefully, with a gentle touch and a calm demeanor, and the voyage will be a successful one.

Dormans—who graduated from Indiana University School of Medicine in 1983—has returned to the institution that trained him as the George J. Garceau Professor of Pediatric Orthopaedic Surgery. Dormans is ready to teach the next generation of the Department of Orthopaedic Surgery healers, to guide them with the same mindful and attentive nature that he guides his sailboat, to show them that a little grit can make a big difference.

Dormans, 62, started his studies years ago at IU School of Medicine wanting to be a rural, family-care doctor in his Hoosier home.

“Something went terribly wrong,” he joked.

Instead of practicing in the outskirts of his hometown of Fort Wayne, he found himself climbing the ranks of some of the nation’s most prestigious children’s hospitals, located in some of the country’s largest cities.

As he studied medicine, he felt there was a lack of doctors bold enough to take on the field’s toughest cases. He saw a need for what he calls “ulta-, super-subspecialists” rather than the general practitioners he’d originally planned to join.

Throughout his career, Dormans has become well known for taking on the complex procedures others in his field tended to shy away from. Among these were challenging spinal surgeries, including the removal of musculoskeletal tumors (bone and soft tissue cancers) and correcting spinal deformities.

These operations always seemed to scare others; but Dormans was fascinated by them, he said.

“I think a lot of orthopaedic surgeons … want to do familiar things, where they feel very comfortable,” he said. “For some reason, I accepted the challenge.”

Now, he hopes to set a good example for his students, showing them that the more complex cases need brave, dedicated and hardworking doctors as much as—or even more than—those he calls cosmetic cases.

“I’m just glad to be here and to help this group achieve their potential,” he said.

Dormans led teams of doctors at Children’s Hospital of Philadelphia (CHOP) from 1991 to 2015, was president of the combined CHOP/Penn medical staff from 1999 to 2001 and served as chief of orthopedic surgery for just under 30 years.  He also served as a professor at the University of Pennsylvania.

He then went to Texas Children’s Hospital in Houston, where he served as Chief of Orthopedic Surgery and a tenured professor at the Baylor College of Medicine for four years before returning to Indiana.

While working in Pennsylvania at CHOP, Dormans and a pediatric sarcoma oncologist at the same institution developed operation techniques and accompanying chemotherapy treatments for the removal of musculoskeletal tumors to help improve the previously existing prognosis for children with bone cancer.

When they began their research, 85 percent of children with such a condition died or were treated with amputations, Dormans said. Now, 30 years later, 85 percent live and amputations are rare, he said.

Work in this and other areas has earned Dormans numerous awards and accolades. He’s served as president of the Pediatric Orthopaedic Society of North America and the president of the Scoliosis Research Society. In 2018, he began a two-year term as president of the Société Internationale de Chirurgie Orthopédique et de Traumatologie—the world’s largest orthopaedic organization with 130 member countries.

His influence stretches beyond the United States. He has worked and volunteered in more than 50 countries; trained over 100 fellows going into pediatric orthopedic surgery; and he formerly served as chairman of the board of directors for Orthopaedics Overseas and president of World Orthopaedic Concern.

But a desire to settle down near family and old friends drove his decision to return to Indiana. His four children are grown and live in different cities along the East Coast now; but he felt an urge to reconnect with his roots.

He accepted the IU School of Medicine post in July 2018. His sailboat remains docked in Chesapeake Bay.

Now that he’s back in Indianapolis, he’s striving to teach his students that facing challenges head-on is a must in his profession. Without doctors willing to take risks, patients—children, in Dormans case—won’t have the chance to live the full and healthy lives they deserve.