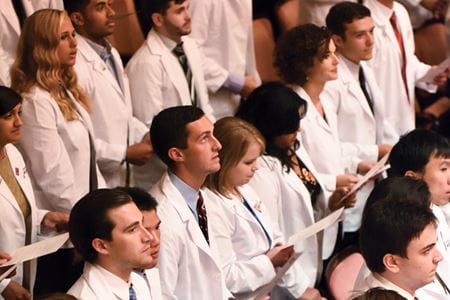 While American philanthropy faced strong headwinds in 2020, Indiana University School of Medicine still found much to celebrate thanks to the generosity of a broad coalition of donors.

Chief among the reasons for gratitude was the successful completion of the Indiana University Bicentennial Campaign, which saw the School of Medicine reap more than $1.7 billion in gifts, which exceeded an already ambitious goal of $1.3 billion.

The incredible response enabled the creation of 99 new chairs and professorships that support the work of our faculty and 144 new endowed and annual scholarships that will help make the dream of medical school possible for students, including students from populations underrepresented in medicine.

Thousands of donors contributed—from faculty, staff and alumni to friends and private foundations. The gifts ranged in amounts from a few dollars to eight figures. While each was welcomed with gratitude, a few were especially notable for their dramatic impact. (See breakout below.)

Additionally, support groups such as Miles for Myeloma (multiple myeloma) and 100 Voices of Hope (breast cancer) were among several grassroots organizations that made important annual contributions.

Even in 2020, as in-person fundraising was greatly curtailed by the pandemic, IU School of Medicine received $44 million in philanthropic support during fiscal 2019-2020. By December, giving totals were ahead of the same point in 2019. It is a testimony to the depth of support the School of Medicine enjoys and to the generosity and dedication of its benefactors.

A final point is key: IU School of Medicine values each gift and we are honored our donors entrust us to carry on their legacies, improve health care and train the state’s next generation of physicians and scientists.

Three gifts totaling $34.5 million from the Walther Cancer Foundation Inc. for supportive oncology, bioinformatics and a fund to support the work of the director of the IU Melvin & Bren Simon Comprehensive Cancer Center.

A $30 million gift from IU School of Medicine alumnus and tech entrepreneur Don Brown, MD, to establish the Brown Center for Immunotherapy.

A $25 million grant from Lilly Endowment Inc. to support an innovative recruitment strategy designed to attract top scientists to IU School of Medicine and the state.

More than $17.5 million in gifts toward breast cancer research from the Vera Bradley Foundation for Breast Cancer, which brings its total giving to the School of Medicine to more than more than $36 million.

Gifts to the School of Medicine totaling $7 million from alumnus James A. Caplin, MD, and his family, for pulmonary and Alzheimer’s research, medical student scholarships and a chair at the Bloomington campus. Caplin’s gifts were part of $10 million in planned gifts to IU.

A $4.5 million bequest from retired faculty member Dietrich (Jack) Bauer, PhD, and his wife Lois Bauer to create a chair in the Department of Microbiology and Immunology, a scholarship for medical students, and an endowed fund in the Office of the Dean to support graduate students.

A $4 million gift from the Stone Family to benefit the IU School of Medicine–Evansville as part of their $15 million gift for the collaborative health sciences campus in downtown Evansville.