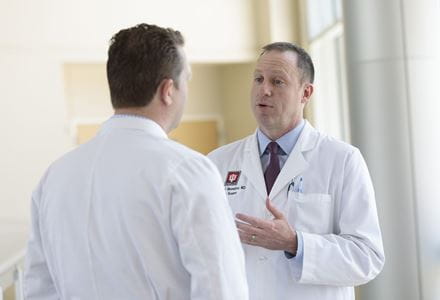 One small change during an essential part of a common surgical procedure could decrease the number of narcotic painkillers female patients use following an operation, a study conducted by Indiana University School of Medicine researchers revealed.

By going without a tourniquet during a total knee replacement surgery, doctors can minimize patient pain and cut down on the use of opioids during recovery.

Tourniquets are traditionally used during knee replacements to minimize blood flow to the surgical field. But doctors in the IU School of Medicine Department of Orthopaedic Surgery who conducted the study found that using compressed, sterile carbon dioxide gas to keep the bone clean can have the same effect—and benefit patients in the process.

Use of a tourniquet has been a clinical standard for generations, said R. Michael Meneghini, MD, an associate professor of clinical orthopaedic surgery who led the recent study.

Recently, data from other researchers started to suggest that patients would experience less pain and a faster recovery and return of muscle function if doctors went without a tourniquet. And Meneghini wondered: if tourniquet-less surgery reduced pain, wouldn’t it in turn reduce opioid use?

The findings were most notable in women, although the study was conducted with both male and female patients. Nationally, 61 percent of knee replacement patients are women.

Researchers conducted a total of 184 knee replacements—93 with tourniquets and 91 without—and discovered that women who underwent a tourniquet-less procedure reported less pain and used fewer painkillers in the first 24 hours after surgery.

There were no differences in pain or opioid consumption in men who underwent surgery, with and without a tourniquet.

More than 680,000 knee replacement surgeries are conducted in the United States each year, making them the most common procedure undergone by adults 45 years and older, according to the Centers for Disease Control and Prevention.

In a total knee replacement, a surgeon removes the warn or damaged cartilage from the patient’s knee and replaces it with a metal cap. Cement is used to hold the new, artificial joint together.

To ensure the cement bonds with the material around it as tightly as possible, surgeons must ensure the remaining bone and metal piece are as clear of blood as possible, Meneghini said. And it was here that tourniquets were used—to cut blood flow to the surgical field, ensuring a clean work space.

In the IU School of Medicine study, Meneghini used compressed, sterile carbon dioxide to clear blood from the bone before cementing. He likened it to a dentist filling a cavity in a tooth and using the same compressed gas to clean a tooth.

It’s different, but it creates the same result, Meneghini said.

The doctor admitted he was surprised that the results of their study showed changes in only women; but it has inspired his team to now look more closely at how men and women respond to different types of pain. His team plans to keep watching the data, hoping that a reference group will reveal that men, too, are experiencing less pain and consuming fewer opioids.

Since the discovery, Meneghini has completely stopped using tourniquets on the patients he treats at IU Health Saxony in his knee replacement surgeries. He’s presented his findings to other orthopaedic surgeons during conferences, and he’s heard others around the country have adopted the practice as well.

“If you can change practice, you’ve hit the mark,” he said. “That’s the sign of good research.”