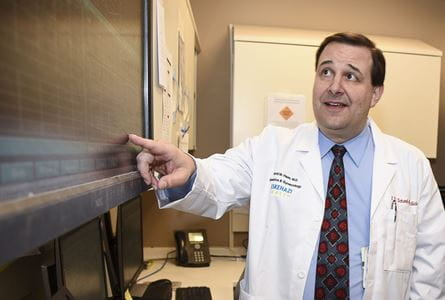 Researchers at IU School of Medicine Department of Obstetrics and Gynecology are learning more about how to prevent miscarriages.

The team, led by David Haas, MD, reviewed clinical trials published in the past about women who have a history of recurrent miscarriages. They found for those women, the use of progestin medication could reduce the chance of miscarrying in a future pregnancy.

“Having miscarriages can be both physically and emotionally difficult for women and their partners. Finding a therapy to help reduce recurrent miscarriages could help them avoid a miscarriage and have a live baby,” the team says in a recently published paper.

Progesterone is a female sex hormone that is essential for successful implantation of a fertilized egg in the uterus. Miscarriage generally happens during the first trimester. While the cause is sometimes found, often there is no clear reason for the miscarriage. Some past studies suggest some women who miscarry may not be making enough progesterone during that early phase of pregnancy.

Haas reviewed the data along with Taylor Hathaway and Patrick Ramsey, MD, MSPH. They looked at 13 trials that studied over 2500 women total who had a history of recurrent miscarriages. Those women were located in five different countries. The team found evidence from these randomized, controlled trials that progestogen medication could prevent miscarriage for women who have had recurrent miscarriage. The medication could also increase the chances of having a live baby.

You can read more about their findings in the full paper on the Cochrane Library website.

Read more about research at IU School of Medicine Department of Obstetrics and Gynecology.