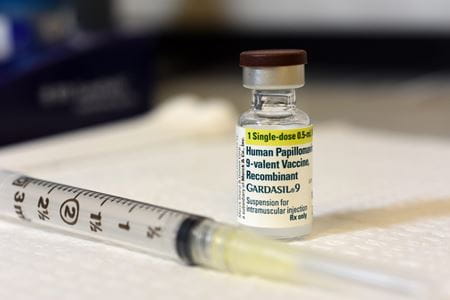 Every year in the United States, almost 30,000 cancer diagnoses could have been prevented with a vaccine.

According to the Centers for Disease Control and Prevention, more than 12,000 women are diagnosed with cervical cancer every year—with another 12,000 men and women told they have oropharyngeal cancer, and 10,000 more people receiving diagnoses of other human papilloma virus (HPV)-related cancers. However, 90 percent of those diagnoses were avoidable, in part because of research happening at Indiana University School of Medicine.

“This is a cancer prevention vaccine. All parents should get this for their children and now adults up to age 45 should get it as well,” said Mary Abernathy, MD, an associate professor of clinical obstetrics and gynecology at IU School of Medicine Department of Obstetrics and Gynecology.

HPV is a sexually-transmitted disease that can lead to cancers in the cervix, anus, throat, mouth and more. The Federal Drug Administration recently approved the Gardasil 9 HPV vaccine to include adults ages 26 to 45. Previously, the vaccine was only approved for people ages 9 to 26. Gardasil 9 protects against nine different types of HPV, including seven cancer-causing types.

“A lot of ear, nose and throat cancers are related to HPV, not just cervical cancer,” Abernathy said.

While it’s important for people to get the vaccine as young as possible before they are potentially exposed to HPV, the new FDA approval allows adults concerned about exposure to get vaccinated as well.

Brown said these cancers can only be prevented by the HPV vaccination, because most of them are caused by HPV.

“The fact that it’s a sexually transmitted virus means people often don’t want to think about it,” Brown said, “but a lot of physicians and families understand now that this vaccine can prevent cancer. They’re understanding the benefit of it.”

HPV could also be contracted through kissing rather than sexual contact, which can also lead to cancer in the throat, ears, mouth and more.

“Often we talk about HPV as it relates to cervical cancer, but we are seeing a rise in HPV-associated oropharynx cancer,” said Marion Couch, MD, PhD, MBA, FACS. Couch is the chair of IU School of Medicine Department of Otolaryngology. She encourages men and boys to get the vaccine as well, not just women and girls.

“If anyone can get it from kissing, it’s pretty clear that we ought to be treating everybody,” Couch said. “From kissing, you can get an oral infection, and that can lead to cancer. The same subtypes of the virus that cause cervical cancer can cause throat cancer and it’s preventable by vaccinating both boys and girls.”

In Indiana, an estimated 922 HPV-associated cancers were reported from 2010-14, according to the Centers for Disease Control and Prevention. About 92 percent of these cases could have been prevented with the Gardasil 9 vaccine. Abernathy and Couch are working with the Indiana State Department of Health as well as health providers statewide to raise awareness about the vaccine. They’re also working with primary care physicians, dentists and pharmacists throughout the state to show patients the importance of getting vaccinated.

“There’s a lot of work to do,” Abernathy said. “I think we have to educate the public about the cancer prevention, so we’re hoping to increase public awareness and really promote it as a cancer prevention drug to parents.”

More research on HPV is also underway at IU School of Medicine. Couch said it’s important to study the virus further to find how often different subtypes lead to cancer, as well as if people who have been vaccinated in the past should be vaccinated again in the future.

“There are so many HPV types. Even if you’ve gotten cancer from one type, we may be able to prevent an infection from one of the other types,” Couch said.

Brown is studying HPV in other countries like Kenya and Malawi, where people have little access to screenings and vaccines.

“Malawi has the highest cervical cancer death rate in the world,” Brown said. “Cervical cancer was once relatively common in the U.S., but now it’s rare because of pap smear screening. In Malawi, less than two percent of women are screened for cervical cancer.”

Brown said lessons learned in Kenya, Malawi, and other countries about how to increase vaccination rates could be put to use by Hoosier health care providers.

“I strongly encourage every parent to insist their children are vaccinated against HPV.  My three children have all received the vaccine,” Brown said.

Learn more about HPV research at IU School of Medicine.

Learn more about research at IU School of Medicine Department of Obstetrics and Gynecology.