Excellence in medical education: Researchers receive award for study about how medical students learn to apologize 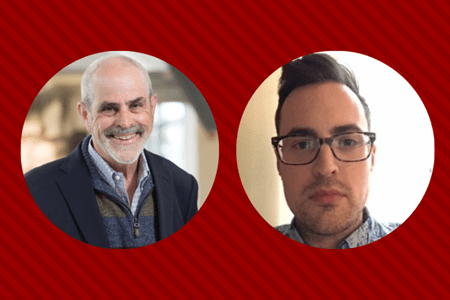 Richard M. Frankel, PhD, professor of medicine at IU School of Medicine, has collected 7,000 stories about professionalism over the past 15 years in the largest database capturing how medical students perceive the concept during their third year of medical school. This rich data trove helped inform his latest article published in the Journal of General Internal Medicine alongside lead author and mentee, Ian Fischer, MS, MA, a doctoral candidate in psychology at IUPUI, about how medical students observe and learn from apologies. The article was recently awarded the John A. Benson Jr., MD, Professionalism Article Prize from the American Board of Internal Medicine Foundation in recognition of its outstanding contribution to documenting the impact of medical professionalism on improving healthcare.

“Subpar apologies leave us unhappy, disappointed and sometimes mad,” Frankel said. “And more in more in our society we see the use of non-apology apologies.”

The two researchers conducted the investigation as part of an American Medical Association-sponsored program that ran from 2003 to 2018 which involved collecting stories written by third-year medical students about one thing they learned about professionalism either positive or negative.

“We focused on apologizing because it impacts a number of areas including the clinical encounter, building relationships and creating an atmosphere where the patient feels cared for,” Frankel said. “Providing a genuine apology when there is an error makes patients more forgiving and more willing to be engaged with a physician.”

Literature also shows that patients who receive genuine apologies are less likely to sue for medical malpractice, and currently, 38 states legally protect a physician’s ability to apologize in recognition of the positive long-term benefits.

Students often learn skills such as apologizing from what is called an “informal or hidden curriculum” during medical school. This includes habits and ways of approaching medical care that are picked up by students during training. Any parent can attest to the phenomenon of a child adopting a habit they were unaware they passed along. In a similar way, students often observe and assume the practices of those teaching them.

“Students don’t learn exactly as they do in the classroom,” Frankel explained. “They develop habits based on local culture. The hidden curriculum can be a positive or negative force.”

As part of the study Fischer and Frankel analyzed 238 professionalism narratives that included an apology that students witnessed or offered during clerkships. They assessed apologies based on four key elements of a genuine apology which include: acknowledgement, explanation, regret and reparation. Findings included that most apologies were offered by faculty or resident and only 17 percent of these were complete, meaning they contained all four elements. Importantly, students had significantly more positive associations with complete apologies.

“A complete apology can really change the atmosphere and have a lasting positive effect.” Fischer said.

In fact, when a complete apology occurred, many noted they wished to be like that attending or resident. Conversely, some students described physicians they did not want to be like as a result of a non-apology. Ultimately, the data showed that students place importance on the ability of those training them to fully show remorse.

“Physicians can find it very difficult to apologize because they are taught to be perfect,” Frankel said. “For young faculty learning communication skills, this is a great opportunity to develop a critically important skill.”

Fischer and Frankel believe that this area of study has important implications for medical training. For example, faculty should be aware of the significant impact they have on influencing the values of their trainees. They could also consider that modeling full apologies provides students with a template to build on in their own career. Areas for faculty development might include bringing in trained facilitators and conducting role play with standardized patients to practice full apologies.

“I have been in medical education for almost 45 years, and this is one of the most exciting papers in terms of faculty development,” Frankel said. “We both developed a deeper appreciation for what constitutes a genuine apology and its impact on our future physicians.”


Interested in more resources about the importance of apology? Frankel recommends the book On Apology, by Aaron Lazare, MD.