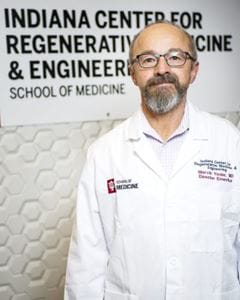 A stalwart of Indiana University School of Medicine’s rich tradition of innovative excellence will be lending his expertise and experience to a group of scientists and researchers doing groundbreaking work in regenerative medicine.

Mervin Yoder, MA, MD, has assumed the role of Director Emeritus for the Indiana Center for Regenerative Medicine and Engineering. He joined the team, led by Chandan Sen, PhD, in January 2019. For Yoder, the opportunity to work with Sen and the pioneering group of researchers that make up his team at the ICRME is proving to be an exciting closing chapter to a distinguished medical career.

“It’s an unbelievable privilege to serve in this role and work with this team,” Yoder said. “Dr. Sen has amassed an incredible group, and his vision is a great one.”

Yoder has been with IU School of Medicine since 1985, when he joined the faculty as an assistant professor of pediatrics. Since then, he has served the school in several roles, including:

According to Sen, who was recruited to lead the newly established center in August 2018, Yoder’s decades of experience in Indiana medicine, as well as his expertise in entrepreneurship and development biology, are an invaluable asset to the center. Perhaps just as important, however, is his role as sounding board for Sen.

“Provocative science, disruptive science, is very risky. Which is not a bad thing. But risks must be taken very intelligently. I feel that I needed a voice around me that can tell me when I’m going down the wrong road. Most people may not feel comfortable telling that to me. But Merv does,” Sen said. “There’s never a time in your life when you don’t need a mentor. I needed a peer-to-peer adviser, and Merv is one for me.”

A self-described stickler for rigor, Yoder has relished the opportunity to debate elements of the cutting-edge work done at the ICRME with Sen on a daily basis. Every morning, Sen and Yoder meet with a rotating group of senior researchers from the team—staging daily debates on topics stemming from the research being done at the center.

“I am not afraid to tell him I don’t agree with him. I don’t have anything to lose—this job is purely for the love of science,” Yoder said, laughing that often he must suppress his excitement at the developments coming from the team. “I have to be very careful because sometimes I’m almost like a little kid. I get almost giddy when I hear the things they’re working on. Because this work is going to blow people away. And what gift it is to be a part of it.”