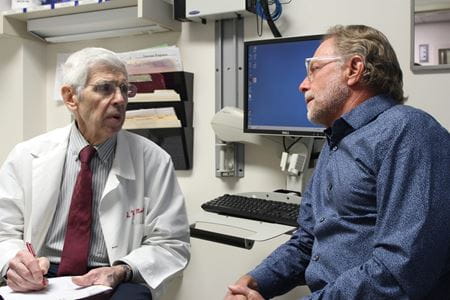 Merrill D. Benson MD, professor of pathology and laboratory medicine, and Noel R. Dasgupta MD, assistant professor of clinical medicine. Do a medical assesment of patient Mark Erwin, a patient of Benson’s for over 20 years.

Two faculty members at Indiana University School of Medicine are looking to improve the health and lives of patients with a specific type of devasting heart disease known as cardiac amyloidosis. Merrill D. Benson, MD, professor of pathology and laboratory medicine, and Noel R. Dasgupta, MD, assistant professor of clinical medicine in the Krannert Institute of Cardiology, are researching cardiac amyloidosis and conducting clinical trials to stop or reverse life-threatening and irreversible damage to patients’ hearts.

The Centers for Disease Control and Prevention reports that about 610,000 people die of heart disease in the United States every year—that’s 1 in 4 deaths. Heart disease is the leading cause of death for both men and women. With statistics this grim, Benson and Dasgupta hope to put a dent in these numbers through the research being conducted by the Indiana University Amyloidosis Center.

Cardiac amyloidosis is a disorder caused by deposits of abnormally structured proteins in the heart tissue. When these misfolded proteins deposit in the heart, the heart walls become thick and can lose significant function leading to heart failure. Signs and symptoms of heart failure can include difficulty breathing and fluid buildup in the lungs and lower extremities. Cardiac amyloidosis can be caused by an inherited condition or due to protein misfolding in older adults without a hereditary condition (also known as senile cardiac or wild-type cardiac amyloidosis).

“Like many heart diseases, cardiac amyloidosis can be more prevalent within the older community, but younger populations can also be affected,” Benson said.

Amyloidosis is often found in patients in their late 50s and early 60s, with some patients being diagnosed as young as 20. Others might make it to 90 or 100 before seeing any signs such as

As research continues on cardiac amyloidosis, Benson and his team have shown that what once was thought to be a rare disease might be more common than initially thought.

“This is a hot topic in cardiology now because, with all the diagnostic imaging studies (such as cardiac ultrasounds/echocardiograms, cardiac MRIs, and nuclear pyrophosphate scans) that are available, we’re seeing that there are more patients that may be affected than we previously thought,” Dasgupta said. “Now we’re realizing it’s probably fairly common.  Because many physicians didn’t get much training in medical school about this disease our group is working to educate local physicians.”

A drug is available for patients who have hereditary amyloid neuropathy, many of whom have heart involvement (cardiomyopathy). For now, to get the drug commercially, you must have both a hereditary mutation and evidence of neuropathy, which can include nerve problems like numbness and tingling in the hands and feet, Dasgupta said. The drug is not yet available for patients with heart involvement without nerve problems or in patients with age-related amyloidosis. Thanks to the research done at IU School of Medicine with cardiac amyloidosis, a new treatment option will start to take its next steps toward public availability.

“We have patients coming from all over the United States and internationally because this is the only site in the world doing this kind of work,” Benson said

Mark Erwin, a 65-year-old man from La Jolla, California, has been a patient of Benson’s for over 20 years, and was one of the first patients to enter the clinical trial of the medication that Benson helped develop. Erwin said that the drug, combined with his lifestyle over the last four years, is improving his life.

“Looking at how I feel, and then also looking at the echocardiograms and my medical record you can see my heart mass has decreased, the thickness of my heart walls has decreased, and my heart function has improved,” Erwin said.

In the meantime, Erwin suggested that individuals get tested for the disease, and recommended that if patients have any underlying symptoms to bring them up to the attention of their doctors.

Children's Tumor Foundation honors Clapp with prestigious award
Teen honors grandmother with fundraisers for Parkinsons research
15th Anniversary of Miles for Myeloma
“We knew if we were to get pregnant again, it would be a rocky road.” Patient with rare condition thanks faculty for saving son
First patient to try FDA-approved drug for amyloidosis is thankful