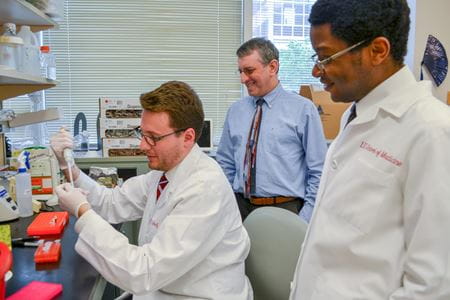 Found in everything from crackers and cookies to savory sauces, the peanut is one of America’s favorite foods. Unfortunately, it’s also one of the most pervasive and life-threatening allergens, affecting millions of people around the world.

While epinephrine and other antihistamines are common treatments for allergic reactions, there are no medications that prevent the potentially fatal event from happening in the first place.

But now, a 10-year partnership between scientists at Indiana University School of Medicine and the University of Notre Dame has led to the first ever allergen-specific inhibitor to prevent allergic reactions to peanut.

When an allergy strikes.

An allergy is an immune response to an otherwise harmless substance like dust, pollen or, in this case, peanuts.

Antibodies, or immunoglobulins, are an important part of the immune response to fight pathogens such as viruses and bacteria. Their job is to patrol the body for invaders. The antibodies come in different flavors (that have different functions), and the type called Immunoglobin E, or IgE is important for immunity to parasites.

But in allergic people, IgE recognizes the allergens and generates a potentially dangerous response even though there is no invader. When proteins from the allergen come into contact with IgE, they connect to each other like pieces of a puzzle. This connection sounds an alarm that sends mediators to the affected area.

The process leads to physical signs of allergic reaction—such as swelling, hives, airway constriction or anaphylaxis.

How do we fix it?

Researchers have worked for years to figure out ways to prevent allergic reactions, but it’s a tricky task. The immune system is critical to our wellbeing, so tweaking with its protective effects can have dire consequences. Additionally, allergen proteins have more than one potential binding site, called epitopes, and identifying the most significant epitopes is complex.

Mark Kaplan, PhD, associate director at the Herman B Wells Center for Pediatric Research, partnered with biochemical engineer Basar Bilgicer, PhD, from Notre Dame, to find ways to help the immune system selectively suppress immune responses that are caused by a certain allergen—peanuts.

And they were successful.

Bilgicer’s team identified peanut protein epitopes that IgE antibodies are most likely to recognize and developed an inhibitor, called a covalent heterobivalent inhibitor (cHBI). The inhibitor is designed to permanently fill the IgE’s receptor, essentially blinding it from recognizing the peanut protein.

Kaplan’s team then ran experiments to test the inhibitor on cell samples from patients with severe peanut allergies. They found that the cHBI was successful in preventing an allergic response in up to 90 percent of all samples.

Does this mean we can prevent allergic reactions?

Kaplan said that the group will continue to research the cHBI to evaluate its performance in humanized animal models, including the duration of its effects and its ability to block anaphylaxis.

However, Kaplan and Bilgicer agree that this groundbreaking study makes promising observations that could lead to an entirely new class of allergy therapeutics—and not just for food. The group recently published a similar study that uses cHBIs to inhibit IgE-mediated allergic reactions to penicillin.

They plan to expand the work into other allergens as well. Kaplan said that their hope is to one day provide allergic patients with inhibitors that are specific for their allergies without interfering with the beneficial effects of immune responses.

For now, scientists will continue to pursue these leads in hopes of helping people with allergies and prevent reactions. Learn more about allergy research and explore the FAQ from the Pulmonary Inflammation, Asthma and Allergic Disease research group.

Mark Kaplan, PhD, is the Billie Lou Wood Professor of Pediatrics, a professor of microbiology and immunology, an adjunct professor of biochemistry and molecular biology and director of the Pulmonary Inflammation, Asthma and Allergy research group at the Herman B Wells Center for Pediatric Research.

The above referenced study is titled “Designer covalent heterobivalent inhibitors prevent IgE-dependent responses to peanut allergen” and was first published by the Proceedings of the National Academy of Sciences in April 2019. The work on penicillin inhibitors was published online in the Journal of Immunology in May 2019 and was entitled “Covalent Heterobivalent inhibitor design for inhibition of IgE-dependent penicillin allergy in a murine model.”