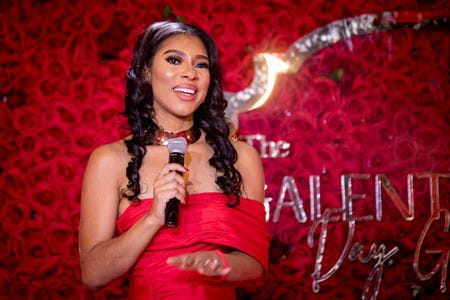 When Indiana University School of Medicine resident physician Kristin Fauntleroy-Love, MBBS, MHA, was named “Medical Professional of the Year” at the Galentine’s Day Gala Women in Business Awards Show in Atlanta earlier this year, she didn’t have an acceptance speech prepared.

“Before the event, I was telling my friends that I didn’t expect to win,” said Fauntleroy-Love, a third-year neurodevelopmental disabilities resident honored for her advocacy of minority patients and patients with disabilities. “I was thankful to even be in that room as a medical resident surrounded by so many accomplished Black women. I even said I didn’t want to win because I am afraid of public speaking.”

She now looks back on that night as the moment she overcame imposter syndrome. Although her nerves were felt, they weren’t seen. Fauntleroy-Love confidently gave an impromptu acceptance speech that she later watched in shock at her competence and composure.

“I think my confidence came from being in a room full of other uplifting Black women—how could I not feel supported and comfortable there?” she reflected. “I knew I deserved to be in that room; therefore, I know I deserve to be in any room I enter—on the basis of hard work and genuine intentions.” 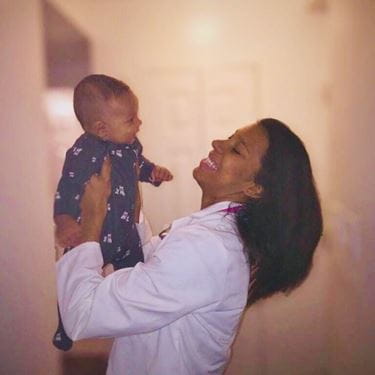 Her journey through an international medical school program and into the Neurodevelopmental Disabilities Residency program at IU has been exhilarating—and difficult. Fauntleroy-Love became a single mother not long after her son, Levi, was born between her second and third years of medical school. Also during medical school, her mother—whom she calls her “biggest cheerleader”—was diagnosed with multiple myeloma.

When Fauntleroy-Love was young, her mom was the first Black woman to be vice president of operations in the cash office at the Lord & Taylor department store chain, but she quit in order to be with the kids and facilitate her husband’s career. Fauntleroy-Love watched her mom make sacrifices that left her personally unfulfilled, and she vowed to approach her own career differently.

She took some time off from her studies to save money for childcare and serve as her mother’s caregiver, but she never lost sight of her goals. In fact, she completed an online master’s program in health care administration through Colorado State University during her “off” time.

“Becoming a parent was planned, but the single parenthood, divorce and lack of support was a surprise,” she said. “I didn’t stray from my path or dreams. I refused to, in fact. I wanted Levi to be raised by a mother who was drenched in joy—working in her dream field, at her top-choice residency program.”

Before Fauntleroy-Love made IU School of Medicine her first choice for residency, her mother’s cancer went into remission; however, it aggressively returned right around residency Match Day. Fauntleroy-Love is comforted that her mom passed knowing her daughter was pursing her dream career in medicine.

Fauntleroy-Love was a biology major on a veterinary medicine track at the University of Georgia when she discovered her true passion—working with people with disabilities. As a volunteer with an organization called Extra Special People (ESP), she helped with the Special Olympics swim team, adaptive summer camp and after school programs. 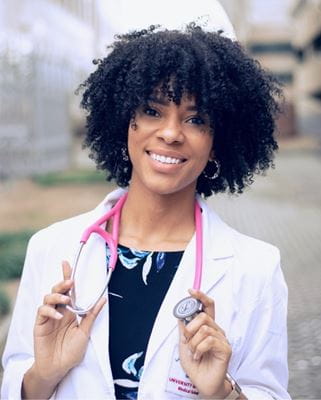 “The day I was accepted to veterinary school, one of the former employees at ESP mentioned they were looking for someone to teach adaptive yoga. I was more excited about that possibility than my veterinary school acceptance, and it was a sign that I needed to redirect myself to a career where I could be a resource for children with disabilities and their families,” Fauntleroy-Love said.

Pivoting to medical school and desiring to live abroad, she was accepted to the St. George’s-University of London Medical School program on the Mediterranean island of Cyprus.

“If I spoke Greek, I would live there forever,” she said.

Fauntleroy-Love chose to come back to the United States to do her clinical clerkships with a partner hospital in Chicago. It was during this time she became a single mother, living far from her family in Georgia.

“I got involved in local parent groups and found my village pretty quickly,” Fauntleroy-Love said. She connected with other single mothers who would reciprocate childcare. “I had very little to give but gave my all to my neighborhood—and I feel like the community noticed that. It became very clear that my success was their success. My medical degree was earned by the Rogers Park Chicago neighborhood.”

When interviewing for NDD residency programs, Fauntleroy-Love was outspoken about her research and advocacy interests in addressing societal barriers to care for people with disabilities. At institutions where lab research was the major focus, she says she was greeted with a polite, “That’s great.” But her experience at IU School of Medicine was different. 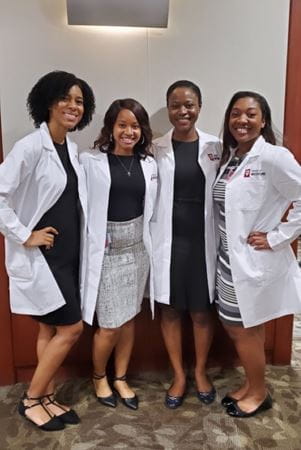 “When I shared my passion for advocacy, it was met with equal enthusiasm,” she said. “IU showed me they developed strong clinicians who are knowledgeable about social determinants of health and who are fierce advocates themselves.”

Fauntleroy-Love became a resident at IU School of Medicine in June 2019 and says her experience has lived up to her high expectations.

“My co-residents and attendings are always understanding of my unique work-life balance needs. Research mentors are willing to have meetings after my son’s bedtime and are flexible to ensure that I am able to grow as a professional without interfering with my role as Levi’s mother,” she said. “Also, as a Black woman, IU has been a place where I feel safe.”

Celanie Chistensen, MD, MS, Neurodevelopmental Disabilities Residency program director, said Fauntleroy-Love is involved with quality-improvement projects at IU Health Riley Hospital for Children and has built a website with links to community activities for children with disabilities, a resource used by many developmental medicine faculty and staff.

“She listens to patients and families closely and tries to help them with health care concerns, as well as community integration,” Christensen observed.

In her chosen medical specialty, Fauntleroy-Love is often tasked with delivering hard news to families, but she finds joy in helping them navigate. “They have been tossed into a world with new vocabulary, multiple specialty appointments and many questions—but I love the opportunity to support them,” she said. “I love reassuring families that they are not going to have to navigate this system alone and that we will be there to help their child get any resources they are entitled to. I love when families come back for follow-up with a bit more confidence, or when they share how they have successfully accessed resources—how they’re building their village.” 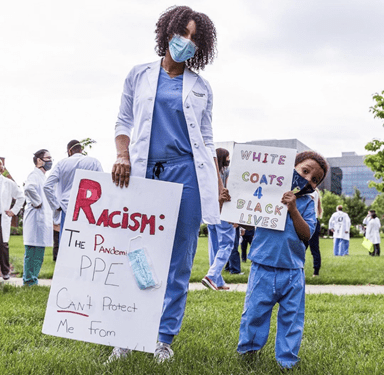 Fauntleroy-Love’s advocacy work took her all the way to Capitol Hill to speak to legislators in support of the Autism CARES Act of 2019, which ensures federal support for research, services, prevalence tracking and other government activities spanning the life of people on the autism spectrum. She has also authored a section on advocacy which is soon to be published in the core textbook for certification in pediatric neurodevelopmental disabilities. And she gives lectures to physicians and residents on how to be more inclusive in the way they provide care to patients with disabilities.

“Advocacy, to me, is a daily and intentional act,” she said.

Fauntleroy-Love also acts as an advocate against systemic racism.

Since she never saw a Black woman physician before entering medical school, she is active on social media, offering support and advice to medical and pre-med students who look like her. She currently has five mentees and prepares them for microaggressions in the clinic. 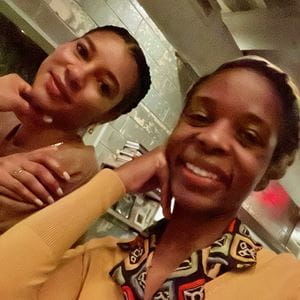 Longtime mentee Adjani Donald has observed and admired Fauntleroy-Love’s ambition for more than a decade since the two first connected when Donald was in middle school. She considers Fauntleroy-Love not only a mentor but also “a sister, a friend, a confidant, a resource, a role model and a motivator.”

“I admire the way she takes on so much to accomplish her goals without allowing it to make her a cold person. There’s hardly ever a moment when she isn’t her most loving, caring self,” said Donald, who graduated from Savannah State University in 2018 and is currently working on a master’s in psychology with her sights set on medical school. “I look to her on a regular basis for inspiration and encouragement.”

The “best advice” Donald has picked up comes from Fauntleroy-Love’s lived example: “Acknowledge and identify your dreams, establish them as goals, develop a plan—and make it happen!”

Fauntleroy-Love tells her mentees when others question their capabilities, it is merely a projection of the critic’s own insecurities. She also tells them to fuel their motivation by remembering their “why.” 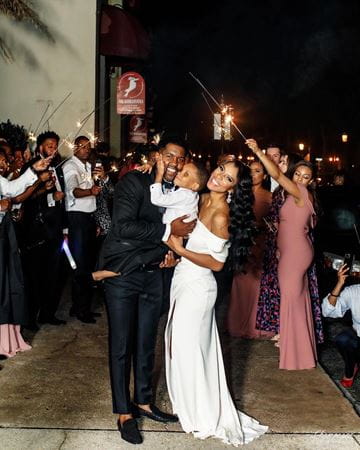 “When others heard I was continuing on with medical school as a single mom or applying to residency—ranking IU first—or even traveling out of the country with Levi for a medical elective, so many people asked, quite condescendingly, ‘How do you think you are going to do that?’” Fauntleroy-Love recalled. “I didn’t know how. I just knew where my joy led me and gave myself no other choice but to try. Many days I didn’t have a ‘how,’ but every day I had a ‘why.’”

Fauntleroy-Love recently remarried on April 2, 2022. Levi just turned 6. The counsel she gives her mentees on simultaneously growing a career and a family is to know the value of children seeing their mother come home every day fulfilled from doing meaningful work.

“A child will begin to learn, through observation, the value of hard work,” she said. “And the joy you radiate from pursing your dream career will radiate onto them.”