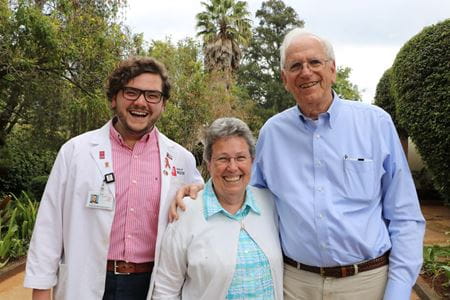 IU School of Medicine student Grant Callen was selected as a Slemenda Scholar and spent a summer with the AMPATH program in Kenya.

As a little boy, Grant Callen had two dreams. He wanted to be President and he wanted to go to Africa.

Inspired by the missionary experiences of fellow church members, as a small child he often told his mother “I go Africa.” After completing the Swahili Language Flagship program at Indiana University Bloomington, Callen did just that and spent a year living with a host family in Tanzania before beginning his medical education at IU School of Medicine–Bloomington.

His experience in Tanzania and passion for global health led to his selection as a Slemenda Scholar which included a summer with the AMPATH partnership in Eldoret, Kenya between his first and second year of medical school. While in both Tanzania and Kenya, Callen participated in research related to HIV transmission. In Eldoret, his work focused on the social and demographic characteristics that contributed to a lack of prenatal care and the transmission of HIV from mothers to their babies.

One outcome of that study was that over 90 percent of the mothers who transmitted HIV to their children were themselves diagnosed at the time of childbirth. Callen has often wondered what the future held for the children in these circumstances. Through the Fogarty International Center at the National Institutes of Health, Callen was awarded a Northern Pacific Global Health (NPGH) Fogarty Fellowship to answer that question.

“What we know from prior research is that these kids get to a point where they are just tired of taking the medicines and being different and feeling the stigma of society, so a lot of them wind up being lost to care,” said Callen. As a Fogarty Global Health Scholar, Callen’s research will include one group of adolescents who are currently in care and one that is not in order to identify sociodemographic characteristics for those that are at risk of dropping out of care. Smaller groups of research participants will be interviewed to determine factors related to their decision-making and health outcomes.

“The goal of the research is to shape adolescent-friendly services based on preferences common among enrolled adolescents and by identifying barriers that are common among the adolescents not enrolled in care,” he continued. Callen will spend a year in Eldoret working with a Kenyan colleague under the leadership of Edith Apondi, MD, a pediatrician at Moi Teaching and Referral Hospital (MTRH). Rachel Vreeman, MD, MS, also serves as Callen’s mentor. Callen will conduct both qualitative and quantitative research on the factors, especially peer networks and social support, that impact whether adolescents stay engaged in HIV care long-term.

Grant Callen participated in the Swahili Flagship Program while a student at Indiana University Bloomington and spent a summer in Kenya as a Slemenda Scholar with the AMPATH partnership.

Members of the NPGH Research Fellows Training Consortium include IU, University of Washington, University of Hawai’i, University of Michigan and the University of Minnesota. The 2019-20 class includes at least 19 NPGH Fogarty Global Health Scholars and Fellows from the consortium, with about half representing low or middle income countries. They will be working in seven countries: Cameroon, Ghana, Uganda, Kenya, India, Thailand and Peru. Ashley Karczewski, an IU School of Dentistry student, will also represent IU as a Global Health Scholar and will conduct research in Kenya about periodontal disease in HIV+ adolescents.

Bob Einterz, MD, director of the IU Center for Global Health and a member of the Fogarty International Center advisory board said, “The Fogarty Fellowship is one of the most prestigious and sought after global health fellowships for health professions students. It will provide Ashley and Grant with a strong foundation in research, and it has a high likelihood of catapulting them into the forefront of global health.”

The grant award includes a week of intense research training at the NIH in Washington, DC. Callen is looking forward to the training and plans to incorporate both research and clinical care in a future global health career.

“I think we are all researchers in one way or another. As medical students, we are all going to find something that fascinates or interests us to the point of asking questions that haven’t been answered yet. Developing research skills now to learn how to answer those pressing questions as you come across them in your life as a physician is an invaluable skill,” he said.

Following his year in Kenya, Callen plans to return to IU School of Medicine to complete his 4th year of medical school. His long-term goals are to be a physician, teacher, and advocate for local-global partnerships.

As for Callen’s other dream, don’t count him out. He will be old enough to run for President in 2028.