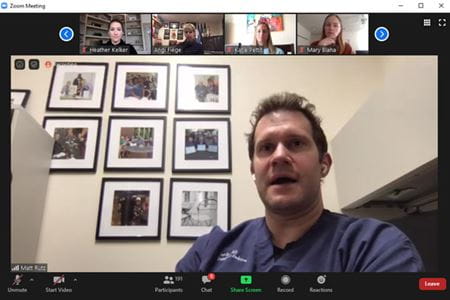 Worried, concerned and overwhelmed, but encouraged, appreciated and optimistic.

Those are among the range of emotions felt by Indiana University School of Medicine emergency medicine and critical care faculty members and learners who are working on the front line of COVID-19 response in central Indiana.

A dozen doctors shared their experiences with nearly 200 people during a recent virtual panel discussion, held via Zoom. They told stories about the steps their hospitals have taken to combat COVID-19; about the challenges they’ve faced, the patients they’ve encountered, and their thoughts on the future.

They also used the panel as an opportunity to announce a new podcast that will serve as a platform of additional COVID-19 storytelling and be produced by the IU School of Medicine Department of Emergency Medicine.

It’s been nearly 10 weeks since the first COVID-19 case was confirmed in Indiana; but the virus had been spreading in the United States for at least two months prior.

This proved to be extremely valuable because they were able to communicate with and learn from the actions of their colleagues working in states hit with the virus first, Hays said. It helped, too, that the state took quick and early action to keep people home, and that working within a large hospital system like IU Health meant access to important resources, like a large stockpile of personal-protection equipment.

But treating COVID-19 patients hasn’t been without its challenges.

At first, little was known about the virus, its symptoms or the best means of treatment, Matt A. Rutz, MD, said. Information was coming at doctors — and the public — quickly and this was often confusing and frustrating.

As time passed and understanding emerged from the chaos, doctors began to feel more informed and were better prepared with every new case that came in. They were able to separate their emergency-room patients based on whether or not they were experiencing coronavirus systems.

It worked well, for the most part, Rutz said. He recalled one patient who came in with stomach pains who was originally placed in the non-coronavirus area of the emergency room. They later determined she was positive for the virus.

Instances like this have kept them on their toes and reiterated the importance of approaching each patient with the utmost caution, Rutz said.

Those diagnosed in the emergency room can end up in a hospitals’ intensive care unit, where doctors and nurses care for them as they struggle to fight the virus.

Philip H. Hanneman, MD, a clinical care fellow, said he’ll never forget the first coronavirus patient he helped treat and the rollercoaster that person seemed to ride—finding themselves on the mend before crashing and nearly dying, and then climbing to full health again.

At one point, it seemed like they were putting more patients on ventilators with every passing day, Hanneman said. It was difficult.

The department has taken steps to care for their doctors’ physical and emotional wellbeing, said Heather Kelker, MD, an assistant professor of emergency medicine.

A wellness team was created to easily connect staff with resources. Doctors and nurses were given extra clothing and areas to shower and change at the end of their shifts so that they didn’t take germs home with them. Cards and donations of food poured in from all over.

In the hope of keeping up that rapport with the community, the department plans to launch its podcast and continue it even after COVID-19 has ebbed. Additional information about the podcast will be released in the coming days.