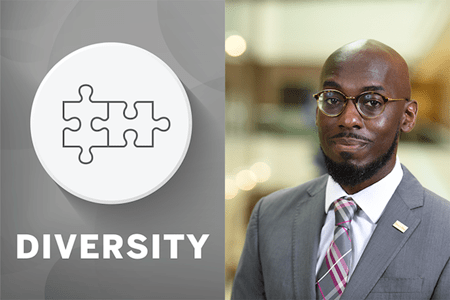 Richard Brown, MA, believes in the power of united purpose.

At the School of Medicine, we are unified by our core values of EXCELLENCE, RESPECT, INTEGRITY, DIVERSITY & INCLUSION, AND COOPERATION, which have been invaluable—particularly in the wake of racial unrest and protests that erupted in the summer of 2020.

During that time, Richard helped our school community have fruitful conversations by developing curriculum for a program targeting members of non-minoritized backgrounds looking to contribute in a meaningful way. Since its inception, Implementing Conversations to Advance Racial Equity (ICARE) has helped more than 200 people become DEI champions within their units at the school.

This is just one of many examples that point to Richard’s embodiment of the core value of DIVERSITY & INCLUSION.

Through his tireless work leading training initiatives, improving diversity in recruitment, and mentoring emerging student leaders, Richard is living out his desire to shape systems and break down systemic barriers for the underrepresented and marginalized, a desire that was inspired by his childhood role models growing up on Chicago’s south side. Role models like Harold Washington, who became the city’s first Black mayor in 1983.

He drew inspiration also from the faces he saw on television—namely, Dwayne Wayne, the main character on the show “A Different World.” Set at a fictional historically Black college, the show—and character—helped Richard see a path to a four-year college for himself.

“People can’t see themselves as successful until they see people like them who are successful,” says Richard.

Now, Richard is helping to provide a similar vision of success for others. He founded Hope for a Better Tomorrow—a nonprofit that annually hosts a signature event called Manhood 101, which connects successful Black men from different careers with participants for mentoring sessions. At IU School of Medicine, he is a mentor for our student interest groups and helps train and develop faculty leaders through the iDREAM program.

I hope you will join me in thanking Richard for his work. His spirit of DIVERSITY & INCLUSION is an example for us all as we work to ensure IU School of Medicine is a safe, inclusive and supportive place.

Richard Brown has found a place where his passions for social justice and organizational leadership align in his role as assistant director for diversity initiatives at IU School of Medicine.