Fighting triple negative breast cancer with “I” and “U” 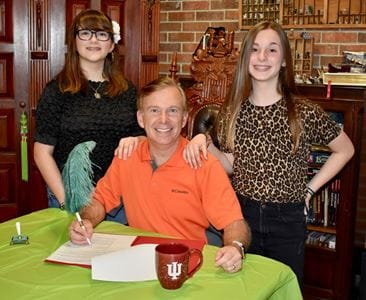 Meridian, Jeff, and Autumn Sobel signing the agreement establishing the Becky Sobel Breast Cancer Research Fund on what would have been Becky’s 50th Birthday.

Beginning a lifelong friendship, Tony Chu and Jeff Sobel first met outside their freshman dorm at Syracuse University in the Fall of 1987. Moving to different regions across the country and around the world, they both served full careers in the United States Air Force. Although separated by duties, they stayed closely connected as friends. They were best men for each other’s weddings, there for each other as kids came along, and celebrated promotions and retirement together.  Jeff and his wife Becky settled in Niceville, Florida. Tony and his wife Emily wound up in Indianapolis, Indiana.

Breast cancer became a part of Tony’s story with the loss of a family member to the disease. The experience showed him the importance of advancing breast cancer research. In time, the Chus met and became avid supporters of Anna Maria Storniolo, MD, and the program she leads, the Susan G. Komen Tissue Bank at the IU Simon Cancer Center. The tissue bank is the only repository of healthy breast tissue in the world, and is a truly unique resource for breast cancer researchers all over the world working to determine why and how breast cancer develops.

Breast cancer became a part of Jeff’s life when his wife Becky was diagnosed with triple negative breast cancer, a very aggressive form of the disease. When the Sobels were looking for help, the Chus turned to Storniolo. She connected them with clinical colleagues and experimental treatment trials around the country. Those connections and treatments provided Becky with time to renew her wedding vows with Jeff, celebrate with family and friends, and plan for what the future would be like for their two young daughters, Autumn and Meridian. Despite the efforts, Becky passed away in March 2017.

The loss inspired Tony and Emily to action. They had seen what the Vera Bradley Foundation Center for Breast Cancer Research was doing to fight triple negative breast cancer and they wanted to do something to advance the research in Becky’s name.

Together, Jeff, Tony and Emily established the Becky Sobel Breast Cancer Research Fund. It will support cutting-edge triple negative breast cancer research. To seal their commitment to support the research Jeff, surrounded by friends and family, signed the fund agreement on March 24, 2019.

It would have been Becky’s 50th birthday.

The creation of the Becky Sobel Breast Cancer Research Fund at Indiana University seems written in the stars. While they had no early connections to the university, the letters I and U had always played a role in Becky and Jeff’s relationship. To get around strict military rules against public displays of affection while dating, Jeff and Becky would write notes to each other using “IU” to symbolize “I Love You.” That shorthand stuck and led to an affinity for the two letters sprouting into a collection of “I” and “U” signs and special objects that decorate their house. Part of that collection was an Indiana University mug gifted to Jeff and Becky several years ago by Tony. The mug has taken on an entirely new and greater significance now. The IU mug sat beside Jeff as he used the pen from their wedding day to sign the agreement and establish the fund in his wife’s honor at Indiana University.